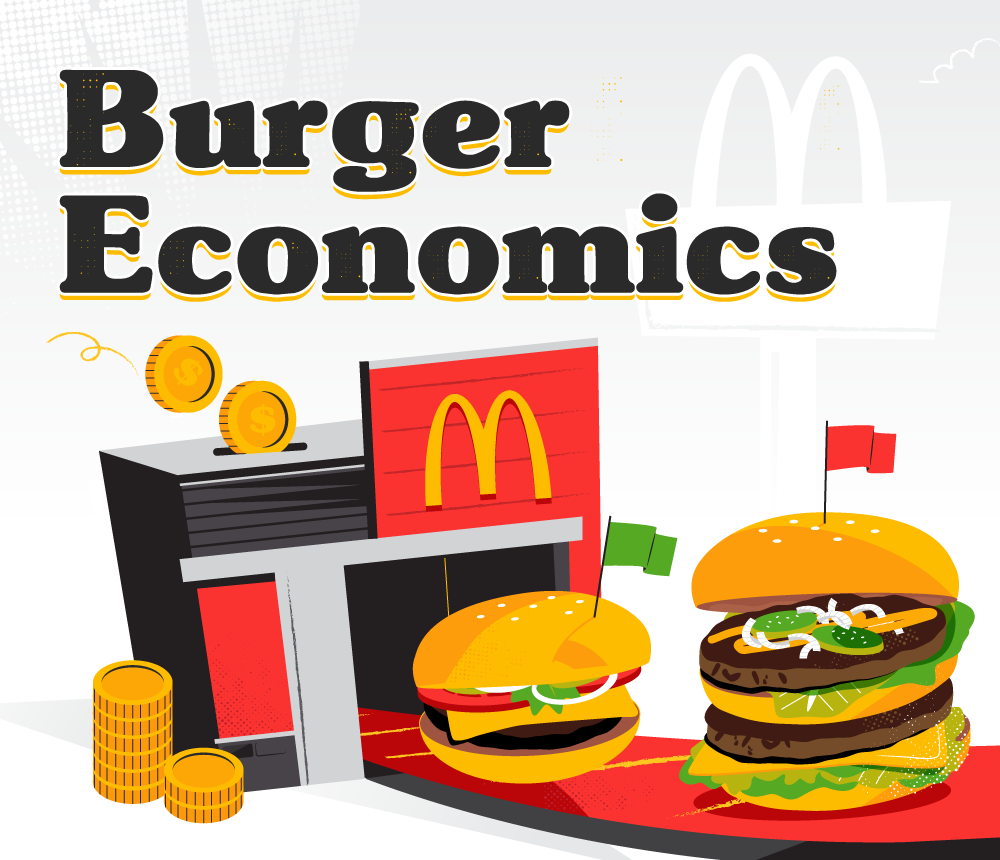 The Price of McDonald’s in Every Country

Economics, Highlights
Visual EditorOctober 8, 2021
We recommend products based on unbiased research from our editorial team. We may receive compensation if you click on a link. Read More.

Fifteen cents. That was the price of Dick and Maurice McDonald’s centerpiece hamburger when they opened a stand selling just nine menu items, back in 1948.

The McDonald’s affordable hunger-buster brought the customers in. And by focusing on a limited menu, the brothers ensured the hamburger and its sides tasted exactly the same every time.

When travelling salesman Ray Kroc discovered the brothers’ ‘Speedee Service System’ six years later, he decided to sell McDonald’s identical burgers in 1,000 locations around the US. Soon, the golden arches spread around the world. And if the menu diversified – Masala Scrambled Egg in India; Japan’s savoury, potato-based Purple McShake – the commitment to consistent quality prevailed.

But the prices are not so consistent. The cost of McDonald’s varies across the 118 countries where Ronald lays his hat. Following our world beer price index, Expensivity has now mapped the price of key McDonald’s meals and items around the world. We’ve also used World Bank national income figures to show how these prices measure up relative to local wages.

The World’s Cheapest Happy Meal is in Pakistan

The Happy Meal began life as a one-off innovation at a Guatemalan McDonald’s in 1979, but was soon homogenized and offered to young gluttons around the world. Today, the happiest Happy Meal is in Pakistan, cheap and cheerful at $2.11. Malaysia, the Philippines, and Egypt also price their Happy Meal below two-and-a-half dollars.

The priciest Happy Meal is in Lebanon ($21.89), at nearly five times the global average ($4.55). The Lebanese Happy Meal is also two-and-a-half times the price of second-placed Switzerland (a still eye-watering $8.53). However, the true cost of the Happy Meal is not economic but nutritional. Health experts have been dubious about McD’s pledge to reduce meals to below 600 calories with lower salt and sugar levels; the number of chemical traces in that not-so-happy box are also troubling.

Franchisee Jim Delligatti invented the world’s most famous burger in 1967, but it was 21-year-old advertising secretary Esther Glickstein Rose who nearly got her Peggy Olson moment when she named it the ‘Big Mac.’ The double-decker was way more expensive than other McDonald’s burgers, but the hype boosted sales and the Big Mac is now the brand’s flagship sandwich.

Like the Happy Meal, the Big Mac is priciest in Lebanon due to inflation ($21.89). Another familiar McVillain, the Netherlands, is in second place ($10.89). Eating out in the Netherlands is expensive because Dutch tastes are simple and eating at home is cheap – encouraging a bigger divide between home meal and restaurant culture. And Esther Glickstein Rose? They laughed when she suggested ‘Big Mac.’ Decades later, they sent her an engraved plaque – but she never got a bonus.

Large Fries in the Philippines for Under 50¢

There’s nothing quite like a McDonald’s fry. Objectively, other chips make more sense. But just try stopping once you’ve started on a carton of McDonald’s fries. Israelis have the biggest deterrent, other than Lebanon: each pack costs $5.82. That’s more than an entire adult meal costs in Russia, Colombia, and 14 other countries.

In the Philippines, large fries cost under a half-dollar, while Turkey and Croatia each come in at just under a dollar. In the US, fries are currently pegged at $3.19. That’s 24.1% more than the global average of $2.57.

Next, we created an ‘affordability’ score for every country by calculating the cost of 100 adult meals as a % of median income. Lebanon has the worst affordability due to the inflation issues mentioned above. To buy 100 adult meals in Lebanon would cost 74.65% of the average annual salary. Nicaragua (52.98%) and Pakistan (51.15%) are closest behind, due to low average incomes of $1,719 and $1,186 respectively.

Monaco (0.69%) and Liechtenstein (0.77%) deliver the best affordability, although with average salaries nearing $200k that’s no surprise. Third-placed Taiwan hits the sweet spot of an unexceptional average income ($32,788) and a bargain meal deal ($5.51) delivering affordability of 1.68%. The United States, Ronald McDonald’s homeland, proudly delivers the next best value at 1.73%.

The World’s Most Expensive McDonald’s Items

Next, our intrepid researcher sampled the most expensive item on the menu in every McDonald’s territory. Well, okay, they grabbed the price, but they didn’t get to grab the ornate and frequently exotic premium burger from each location.

A glance at this world map is enough to get you salivating even if you don’t know what all the words mean. Denmark’s Homestyle x Henrik Jyrk Tokyo Teriyaki? It’s a Japanese-themed burger developed by gourmet chef Henrik Jyrk, featuring onion rings, beef steak, and teriyaki sauce in a brioche bun. It costs $9.55, and carries 802 calories.

Top of the table is Lebanon with its $27 chicken sandwich, because inflation. But France and Monaco are tied in second with the more exotic Signature Charolais & Sauce Aux 2 Moutardes. Charolais is the breed of cow, the two mustards are Dijon and l’Ancienne, the cheddar is red, and it’s 100% French. Mouth-watering fast food at a mouth-watering price ($14.38).

Ready to find how your next holiday destination prices up in the McDonald’s leagues? Use our interactive table, below, to explore our data in full.

We gathered the prices of the most popular items from the ‘order McDelivery’ section of the official McDonald’s website in every country in this study. An adult meal was defined as a Big Mac, large fries, and a large Coca-Cola drink.

To determine the affordability of a McDonald’s in every country, we calculated the cost of 100 adult meals as a % of median income (World Bank data) in each country.