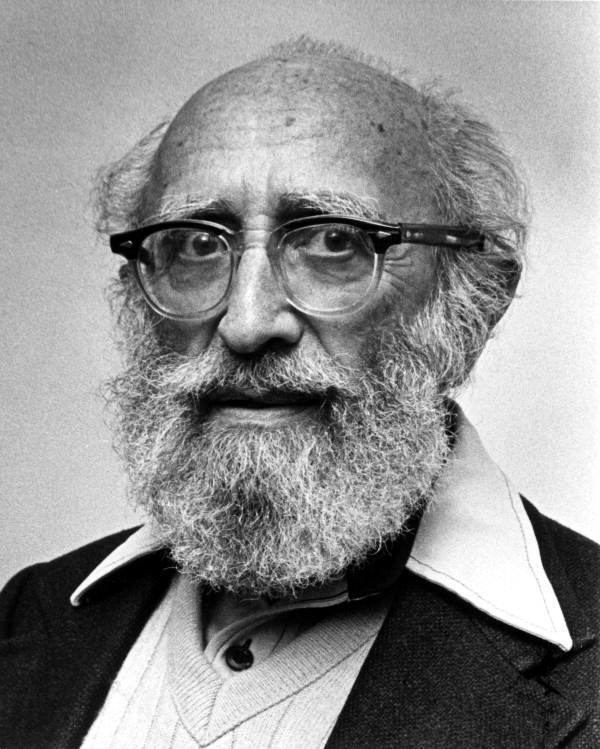 Abba P. Lerner (1903–1982) was born Abraham Ptachya Lerner into a Russian-Jewish family in the Imperial Russian province of Bessarabia (largely overlapping with what is now the independent country of Moldova). Lerner was known professionally throughout his life by the nickname “Abba,” Hebrew for “father.”

When Lerner was three years old, his family emigrated to the UK, settling in London’s East End. The future economist received a traditional Jewish primary education.

Lerner’s parents were impoverished and the boy had to go to work at the age of 16.

Lerner worked at a succession of jobs doing manual labor, picking up skills along the way. He was eventually able to work as a professional capmaker, machinist and commercial printer. He also taught in Hebrew schools for a time.

While studying to become a rabbi, Lerner attempted to start up several small businesses, all of which were failures.

In 1929, Lerner decided to study economics by taking night classes offered by the London School of Economics (LSE). He later said he decided to do this in order to understand better why his own attempts to found a business had not been successful.

Lerner earned his bachelor’s degree in economics from LSE in 1932.

Lerner went on to do graduate work in economics at LSE, where he studied with John Hicks among other outstanding economists.

Some years later, Lerner spent a year studying at the University of Manchester and at Cambridge University. However, he never completed a higher degree.

While at LSE, during the 1931–1932 academic year, Lerner had met the American Paul Sweezy, who was based at Harvard University but was visiting LSE for the year. The two men struck up a friendship.

After Sweezy returned to Harvard, he and Lerner collaborated in founding the left-leaning Review of Economic Studies, along with a third friend and budding economist, Ursula Webb (better known as Ursula Hicks). Lerner’s previous experience as a commercial printer came in handy in this endeavor.

While passing through Cambridge as part of a fund-raising tour for the new journal, Lerner made the acquaintance of Joan Robinson, who was very friendly and helpful to the under-credentialed younger scholar.

When Lerner returned to Cambridge around 1935 (accounts differ) for an academic semester, he attended a series of lectures by John Maynard Keynes, the substance of which was his classic work, The General Theory of Employment, Interest, and Money, which was then just on the point of being published.

The International Labour Office asked Lerner to write a review of the book (see “Selected Works Authored or Co-authored by Lerner” below). His review was universally praised as providing a clear analysis and powerful defense of Keynes’s work—even more effective, some felt, than Keynes himself.

Lerner’s first academic position in the US was in the economics department at the University of Missouri–Kansas City. His last position was at Florida State University in Tallahassee.

In between, Lerner worked at too many academic institutions to mention here. However, we may mention the following schools as among the most notable ones where Lerner taught: the University of California, Berkeley; the New School for Social Research and Columbia University, both in New York City; and Michigan State University in East Lansing, Michigan.

Lerner was often considered eccentric by many of his colleagues. For example, he decided to pay a visit to Leon Trotsky in Mexico City before he was assassinated by Russian dictator Joseph Stalin’s henchmen.

However, Lerner was also widely respected, even by his ideological opponents, for the intelligence and the clarity of his economic writings.

Lerner was particularly esteemed for his contribution to the success of the Keynesian revolution, which many at that time saw as critical in staving off revolutionary socialism in Europe and the US.

Lerner was a lifelong socialist in his economic thinking. Much of his work is devoted to the theoretical analysis of diverse kinds of possible socialist economies, in order to determine the most efficient, realistic, and hence politically attractive form of socialism.

Lerner’s 1944 textbook, The Economics of Control: Principles of Welfare Economics (see “Selected Works by Lerner” below), has been called a “manual” for running a centralized economy.

In addition to his theoretical work on socialism, Lerner made a number of more technical contributions to mainstream economics. For example, he made significant advances in our understanding of the relation between the employment rate and the inflation rate.

Lerner also devised a model of monopolies, upon which he based a famous methodology—now known as the “Lerner index”—for grading different companies on a scale of the strength of their monopoly control over their markets.

Finally, during the high inflation era of the late 1970s and early 1980s, Lerner advanced a theoretical remedy he called a “Market Anti-Inflation Plan,” or MAP, involving tradable rights of business firms to raise their prices.

Everybody’s Business: A Re-examination of Current Assumptions in Economics and Public Policy (1961).

Flation: Not Inflation of Prices, Not Deflation of Jobs: What You Always Wanted to Know About Inflation, Depression, and the Dollar (1973).

Planning and Paying for Full Employment (1946).

Colander, David, “From Muddling Through to the Economics of Control: Views of Applied Policy from J.N. Keynes to Abba Lerner,” History of Political Economy, 37(Supplement 1) : 277–291 (2005).