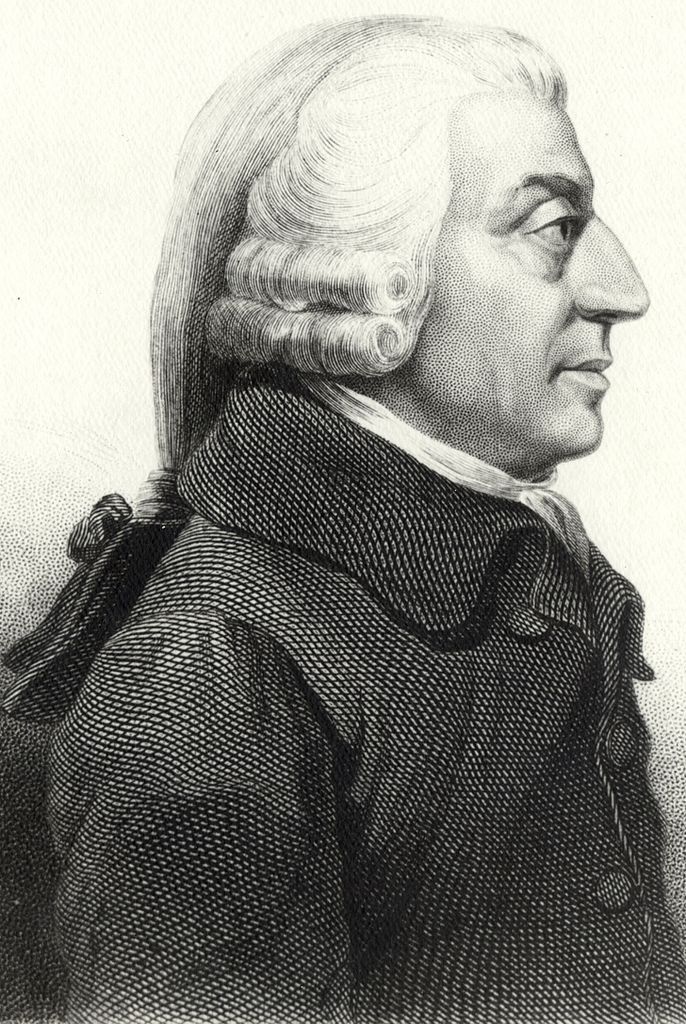 Adam Smith (1723–1790), the “Father of Economics,” was born in the town of Kirkcaldy, on the Firth of Forth in Fife county on the southeastern coast of Scotland.

Smith’s father, also named Adam Smith, was a lawyer, a public prosecutor, and comptroller of customs in Kirkcaldy. His mother came from the local landed gentry.

Smith was educated at the local Kirkcaldy grammar school, where he studied Latin, mathematics, history, and English composition. He graduated from grammar school in 1737, when he was 14.

That same year, Smith matriculated at the University of Glasgow, where he studied moral philosophy under the distinguished Scottish philosopher, Francis Hutcheson.

After taking his undergraduate degree at the age of 17, in 1740, Smith won a University of Glasgow–sponsored scholarship which allowed him to pursue graduate studies at Oxford University’s Balliol College.

Smith did not adjust well to student life at Balliol and left Oxford in 1746 without taking a degree. There are signs that he may have left early because he suffered a nervous breakdown.

Throughout the rest of his life, Smith claimed that the level of teaching and scholarship at Oxford was low and that all the English universities at that time—in the early stages of the great Scottish Enlightenment—compared very unfavorably with the Scottish ones.

Back home in Scotland, Smith began offering public lectures in 1748 in Edinburgh. Though his lectures were delivered on the campus of the University of Edinburgh, he was not employed by the university. Rather, the lectures were held under the auspices of the prestigious Philosophical Society of Edinburgh, which in turn operated under the patronage of the philosopher, Henry Home, Lord Kames.

The subject of his first course of public lectures was rhetoric, literature, and history, including “the progress of opulence.”

In 1750, Smith met the eminent philosopher David Hume, who was a decade his senior. The two men became fast friends for the rest of their lives.

In 1751, Smith was invited to teach a course on logic at the University of Glasgow. The following year, he was invited to join the Philosophical Society of Edinburgh as a regular member.

Though still only 28 years old, Smith had now entered the charmed circle of the leading philosophers of the Scottish Enlightenment.

In 1753, Smith obtained his first considerable academic position, to the chair in Moral Philosophy at the University of Glasgow. He published his first book,The Theory of Moral Sentiments, in 1759.

The contemporary reader might wonder how the “Father of Economics” came to write a book on ethics from a chair in “moral philosophy.”

The answer is that the domain of “moral philosophy” was considered far broader then than it is today, encompassing what we would now regard as most of philosophy, the humanities, and the social sciences.

At the time, the phrase “moral philosophy” implied a contrast, not with some other branch of philosophy as we understand it today, but rather with “natural philosophy,” which today we call “natural science.”

For this reason, in the eighteenth century there was nothing strange about a professor being known for two main works, the first of which was a traditional treatise on ethics, and the second, a pioneering investigation into what we would now call political economy.

The Theory of Moral Sentiments (the content of which we will discuss below) was a hit with the reading public and students began flocking to Smith’s classes at Glasgow University. However, in 1763, Smith received a tempting offer from a wealthy patron to whom he was introduced by his friend David Hume.

This patron hired Smith (at twice his salary as a distinguished college professor) to accompany his stepson as tutor on the youngster’s “grand tour” of Europe—a traditional element in the education of the English aristocracy’s young men.

On this trip, Smith met Voltaire, Benjamin Franklin, and other philosophical luminaries (“philosophes”) and statesmen of the time. More importantly, Smith also discovered the French “Physiocrat” school of economists, founded by François Quesnay, who opposed the Mercantilist policies which prevailed at the court of King Louis XIV.

It was the Physiocrats who first spoke of “letting happen” or “leaving along” (“laissez faire”) as the wisest government economic policy.

In 1766, Smith returned home to Kirkcaldy, where he devoted the next decade to writing his magnum opus, An Inquiry into the Nature and Causes of the Wealth of Nations, which was published in 1776.

In 1778, Smith secured as sinecure as Commissioner of Customs of Scotland, and in 1987, he was elected Lord Rector of the University of Glasgow.

Adam Smith died in 1790. He left behind voluminous lecture notes on various subjects, several of which were edited and posthumously published, most of them in recent times.

Adam Smith’s main contributions to intellectual history are contained in the two masterworks he published in his lifetime: The Theory of Moral Sentiments (1759) and The Wealth of Nations (1776). In the former work, Smith laid out an influential theory of ethics, while in the latter he essentially invented the discipline of political economy.

As a moral philosopher, Smith stood in the tradition of “moral sentimentalism,” founded by Anthony Ashley Cooper, Third Earl of Shaftesbury and by Francis Hutcheson. The main idea of this tradition is that the metaphysical foundation of human morality lies in our feelings, and not in our faculty of reason.

Smith basically accepted this insight, but he refined it in one crucial way. Namely, he emphasized the importance of the role of the moral imagination in permitting human beings to attain an objective point of view on the world, which in turn allows us to put ourselves in the place of others, thus allowing us to imagine how they would feel in any given situation.

Its principal value for moral theory is that, by connecting others’ feelings with our own by means of the moral imagination—which is an aspect of reason—the impartial spectator helps to explain both how we are able to sympathize with others and why that sympathy is practically motivating for us (essentially because it allows others’ feelings to become identified with our own).

The Wealth of Nations moves from an individualist theory of morality to a sociological investigation of the “nature and causes” of the relative prosperity of different societies. This very long masterwork explores a wide variety of topics, but here we must content ourselves with mentioning only four.

First, Smith was one of the first scholars to clearly enunciate the vital role of the division of labor in the creation of wealth. His discussion of the many different specialized steps required to produce the humble pin—and therefore the need for many specialized workers assembled together under one roof in a pin factory—has become a classic of the economics literature that continues to be presented to beginning students to this day.

Second, Smith emphasized the way in which an astronomical number of autonomous transactions, which together constitute a free-market economy, happen of their own accord through buyers and sellers coming together in the marketplace in pursuit of their own private benefit.

This insight had been articulated by others before him—especially, by Bernard de Mandeville—but Smith’s analysis was far more sophisticated and detailed than Mandeville’s. Moreover, Smith’s historical influence on our understanding of the market as a self-organizing process (as we might say today) is without a doubt partly due to the brilliant metaphor he invented to describe it: the famous “invisible hand.”

Third, Smith basically subscribed to the arguments of Quesnay and the Physiocrats in favor of free trade. On this topic, he functioned as a conduit of the arguments of the earlier French economists to the English-speaking world.

Finally, it is important to stress, in contrast, that Smith was not a modern libertarian who repudiated all government intervention in the economy. Rather, the tradition in political economy which he founded is better characterized as “classical liberalism.”

Classical liberalism was largely directed at curtailing the arbitrary power of the British monarchy to regulate commerce at his whim. However, the political philosophy of Smith and his followers by no means denied the important role of morality (virtue) in public life.

The ultimate metaphysical foundation of Smith’s moral system—that is, the theory of moral sentiments discussed above—was natural law theory. Natural law theory is the idea that right and wrong are determined in relation to universal human nature (which itself derives from God).

As Smith’s friend Edmund Burke would famously put the point,

Society cannot exist, unless a controlling power upon will and appetite be placed somewhere; and the less of it there is within, the more there must be without.

Smith and Burke saw this idea as applying equally to the marketplace. Where self-discipline was lacking, government regulation would be warranted.

Thus, Adam Smith’s classical liberalism was far removed in spirit from modern libertarianism. Rather, it is best characterized as a system of “ordered liberty.”

The Works of Adam Smith

An Inquiry into the Nature and Causes of the Wealth of Nations (1776); unabridged edition in two volumes (1976).

Essays on Philosophical Subjects(composed at various times, beginning in 1750s; first published in 1795).

The Glasgow Edition of the Works and Correspondence of Adam Smith, eight-volume set, including index (1987).

Brown, Vivienne and Samuel Fleischacker, eds., The Philosophy of Adam Smith: Essays Commemorating the 250th Anniversary of The Theory of Moral Sentiments (2014).

Buchan, James, The Authentic Adam Smith: His Life and Ideas (2006).

Fleischacker, Samuel, A Third Concept of Liberty: Judgment and Freedom in Kant and Adam Smith (1999).

Fleischacker, Samuel, Being Me Being You: Adam Smith and Empathy (2019).

Haakonssen, Knud, The Science of a Legislator: The Natural Jurisprudence of David Hume and Adam Smith (1981).

Hanley, Ryan Patrick, Adam Smith and the Character of Virtue (2009).

Hont, Istvan and Michael Ignatieff, eds., Wealth and Virtue: The Shaping of Political Economy in the Scottish Enlightenment (1984).

Montes, Leonidas, Adam Smith in Context: A Critical Reassessment of Some Central Components of His Thought (2004).