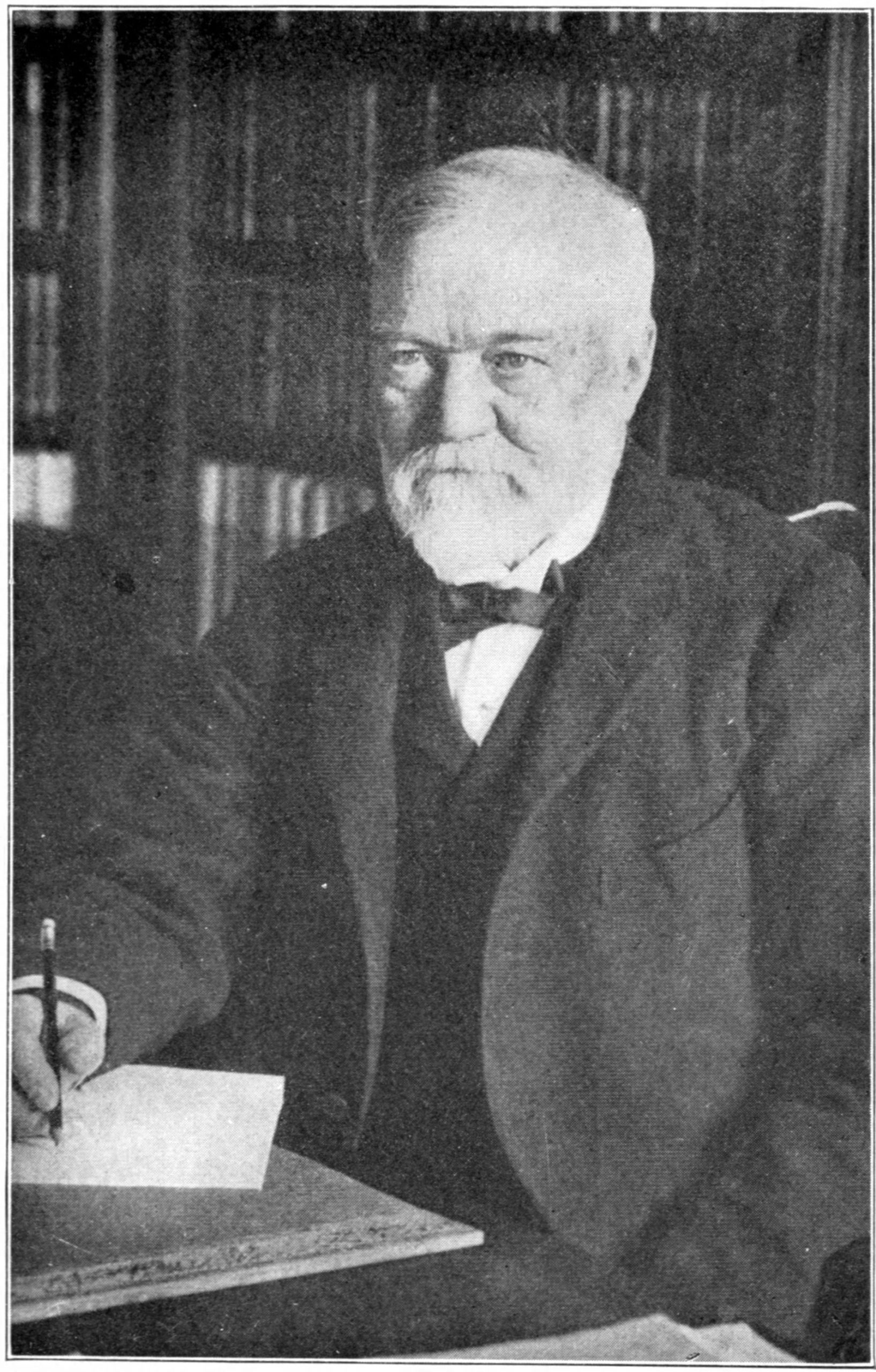 Andrew Carnegie (1835–1919) was born in the small but historic town of Dunfermline, Scotland, northwest of Edinburgh on the northern side of the Firth of Forth.

The town is still dominated by the ruins of Dunfermline Abbey, a once-magnificent example of Romanesque architecture, which was founded in the early twelfth century and was sacked in 1560 during the Protestant Reformation.

Carnegie’s father was a handloom weaver and the boy was born in a “weaver’s cottage,” with only one room on the ground floor which was shared with the neighboring cottage.

Carnegie’s maternal uncle was an educated man, who introduced the boy to the heroes of Scottish history, such as William Wallace, and the poetry of Robert Burns.

When the demand for heavy damask increased, the family grew a bit more affluent and were able to rent a larger, single-family house.

However, this relative prosperity proved to be short-lived, as Scotland fell into a severe recession, causing the father’s work to dry up. As a result, the mother began to help support the family by selling meat pies.

In the early fall of 1848, when the young Carnegie was not yet 13 years old, his family borrowed money from his mother’s prosperous uncle and emigrated to the US, settling in Allegheny City, Pennsylvania. Many years later, Allegheny City was absorbed into the city of Pittsburgh, forming what is now the North Side community.

Carnegie and his father both found work in a cotton mill in nearby Pittsburgh owned by a fellow Scotsman. The younger man initially worked as a “bobbin boy,” changing spools of thread on the looms for 12 hours a day, six days a week.

In this way, Carnegie’s formal education ceased with grammar school.

The boy worked so well in the cotton mill that he was soon hired away by the owner of a nearby mechanized bobbin factory, who gave him higher waSuperintendent of the Military Railways and the Union Government’s telegraph lines in the Easges and increased responsibility, including stoking the boiler that supplied steam to the machines that produced the bobbins.

In his autobiography, Carnegie recounts how his new job caused him so much worry that he would get out of bed multiple times every night to check the steam gauges, making sure the pressure was neither too low (causing the machinery to falter) nor too high (leading to an explosion).

The following year, in 1849, Carnegie found a less-strenuous but still-better-paying job delivering telegrams in Pittsburgh. Through this job, he made many contacts with leading businessmen of the city.

Carnegie’s excellent work was rewarded once again by fast promotion, this time to the position of telegraph operator.

During this period of his life, Carnegie used his scant leisure time to read widely, to make up for the deficit in his education.

A Pittsburgh-based retired US Army officer and War of 1812 veteran, businessman, and philanthropist named Colonel James Anderson had opened his own extensive personal library to local working boys each Saturday night.

Carnegie made heavy use of Col. Anderson’s library and felt that the reading he did there helped him greatly.

In later years, Carnegie always credited Col. Anderson with inspiring him with the idea for his most-famous act of philanthropy—building nearly 1700 free public libraries all across America (and some 800 more in other countries around the world).

In 1853, when Carnegie was 18 years old, he obtained a job as a telegraph operator for the Pennsylvania Railroad Company, where he also worked as personal secretary to the railroad executive Thomas A. Scott.

Carnegie won Scott’s trust and rose up through the ranks quickly. In 1859, he was appointed Superintendent of the Pennsylvania Railroad Company’s Western Division.

This job was crucial to Carnegie’s later career. The railroads were the first large-scale industrial companies in the US, and the Pennsylvania Railroad Company was the largest of them all at that time.

Over the next few years, Carnegie familiarized himself with the basic elements of business management, including supply chain assurance, cost control, and so on.

Under Scott’s guidance, Carnegie also began to invest his savings in the railroad’s stock and other securities, mainly involving railroad equipment, such as sleeping cars, rails, bridges, and iron.

It must be acknowledged that in his early investments Carnegie benefited from practices that were tolerated at the time but would be criminal today, notably insider trading.

During the Civil War, Scott was appointed Assistant Secretary of War by President Abraham Lincoln. This placed him in a position to further help his protégé, whom he had appointed Superintendent of the Union government’s military railways and telegraph lines in the East.

The success of the Union forces in the Civil War demonstrated to Carnegie (and many others) the crucial importance of industrial might to the military, economic, and political power of the country.

After the war, Carnegie left the railroad industry to concentrate on ironworks. He also profited handsomely at this time from prescient investments in oil drilling in eastern Pennsylvania.

The first two companies founded by Carnegie were the Keystone Bridge Works and the Union Ironworks, in Pittsburgh. Carnegie soon built several steel rolling mills in the Pittsburgh area, as well.

Carnegie was heavily involved in the construction, between 1867 and 1874, of the landmark, all-steel Eads Bridge spanning the Mississippi River at St. Louis, Missouri. The Eads Bridge is the oldest surviving bridge across the Mississippi Bridge today.

This pioneering structure was a proof of concept, which did much to hasten the transition from the use of wrought iron in construction to the use of steel.

Carnegie made his fortune in the steel industry, eventually controlling a vast integrated iron and steel empire, which was the largest such industrial conglomerate ever owned by one person in the US.

Carnegie’s steel empire was based on two great innovations that he did not invent, but which he adopted early on.

The first was the Bessemer process for making steel, patented by the English inventor Henry Bessemer in 1856, which involved a type of modified pig iron furnace which allowed carbon to be burned away from the molten iron more easily. This great improvement in the ease and efficiency of producing steel led to a rapid decline in steel prices.

However, the decline in steel prices ended up being good for Carnegie’s business, as it was more than made up for by the rapid replacement of wrought iron by the newly affordable steel throughout the world of industrial manufacturing. In particular, railroad rails rapidly began to be made from steel.

The second innovation that Carnegie adopted was the vertical integration of his supply chain, linking iron ore mines to steel works, to shipping on rivers and lakes, to railroads.

By owning nearly all the nodes in his supply chain, Carnegie put himself in a powerful competitive position in the nascent US steel production marketplace.

In 1883, Carnegie purchased his greatest rival, the Homestead Steel Works in Pittsburgh. By the late 1880s, he was the largest manufacturer of coke, pig iron, and steel rails in the world.

In 1892, a massive strike broke out at Carnegie’s recently acquired Homestead Steel Works. Together with his close business associate Henry Clay Frick, Carnegie broke the strike by locking out the striking workers and bringing in a new, non-unionized workforce.

Carnegie and Frick also brought in 300 Pinkerton private security agents, resulting in an exchange of gunfire and the death of seven strikers and three Pinkerton men. About two weeks later, Frick narrowly missed being assassinated when an anarchist shot him twice in his office, wounding him severely.

Carnegie’s reputation never entirely recovered from the bad publicity associated with the Homestead strike and its aftermath.

By the end of the decade, US steel production exceeded the UK’s—with Carnegie in control of a large chunk of it. In 1892, he consolidated his holdings into the Carnegie Steel Company.

In 1901, Carnegie turned 65 years old and began to turn his thoughts towards philanthropy. He turned to the banker and financier, John Pierpont Morgan, who agreed to help make it possible for him to sell Carnegie Steel and retire.

After various financial maneuvers and negotiations, Carnegie received payment in cash and securities worth some $225 million (about $7.3 billion in today’s dollars). In return, Morgan now held a new corporation that he named United States Steel Corporation, with a market capitalization $1.4 billion (some four percent of US GDP at the time).

In the 1880s, Carnegie had begun to produce occasional writings, some autobiographical in nature, and others expressing his economic, social, and political views and his philosophy of life (see below).

Carnegie wrote that his own ideas in all these areas had been strongly influenced by the liberal (in the older sense of “laissez-faire”) economic and social doctrines of the English philosopher Herbert Spencer, with whom he became personally acquainted on one of his many trips back to the UK.

On his deathbed, Carnegie is alleged to have uttered his famous “dictum”:

Triumphant Democracy, or, Fifty Years’ March of the Republic (1886).

The Autobiography of Andrew Carnegie (1920).

Alderson, Bernard, Andrew Carnegie: The Man and His Work (1902).

Bridge, James Howard, Inside History of the Carnegie Steel Company: A Romance of Millions (1992).

Larsen, Andrew, The Man Who Loved Libraries: The Story of Andrew Carnegie (2017).

MacGregor, J.R., Andrew Carnegie: Insight and Analysis into the Life of a True Entrepreneur, Industrialist, and Philanthropist (2019).