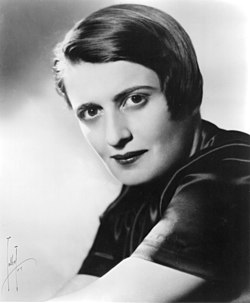 Ayn Rand (1905–1982) was born Alisa Zinovyevna Rosenbaum to a middle-class Russian-Jewish family in Saint Petersburg. Her father was a pharmacist. Her mother was religiously observant.

It was during this time that Rand decided she was an atheist and swore to live her life according to the dictates of reason.

The Bolshevik Revolution broke out when Rand was 12 years old. The new government confiscated her father’s business and the family initially fled to the Crimea, behind the White Army lines in the Russian Civil War.

In 1921, following the Red Army’s defeat of White forces in the south, Rand’s family returned to Petrograd (as Saint Petersburg had been known since 1914). At the age of 16, Rand was among the first cohort of women students allowed to enroll at Petrograd State University, where she studied pedagogy, history, and philosophy.

Rand was suspected of political unreliability and was briefly expelled from the university, along with other students from a bourgeois cultural background. Eventually, the group was permitted to return to their classes and Rand received her bachelor’s degree in 1924.

After leaving Petrograd State University, Rand—now 19 years old—found a job working for the State Technicum for Screen Arts in what was now Leningrad. One of her assignments was to write a biography of the wildly popular Polish actress, Pola Negri. The result—a modest Russian-language volume entitled simply Pola Negri—appeared in 1925. It was the future philosopher’s first published work.

It was during this time that Alisa Rosebaum adopted the pen name, Ayn Rand.

Rand was highly ambitious, was viscerally opposed to her country’s Communist regime, and was embarked on a career as a writer for the film industry. She also had relative in Chicago.

What could be more natural, then, than for her to wish to emigrate to the US and to try her luck in Hollywood? Luckily, the Soviet regime had not yet cut off all emigration as it would do later, and Rand was able to obtain an exit visa.

In 1926, Ayn Rand arrived in New York harbor. She has written that the sight of the Manhattan skyline and the thought of everything it represented in terms of human striving, greatness, and freedom brought what she called “tears of splendor” to her eyes. After a brief stay with her relatives in Chicago, she left for Hollywood.

Rand soon got a huge break through a chance encounter with Cecil B. DeMille, who hired her. After working as an extra on the set of The King of Kings (1927), she was given work as a junior screenwriter.

Rand married an aspiring actor named Frank O’Connor in 1929 and received her American citizenship papers in 1931. O’Connor (not to be confused with a more-famous Hollywood actor of the same name) gave up his acting ambitions to support Rand’s work.

During her early years in Hollywood, Rand wrote several short stories, plays, and screenplays, which were never published or produced during her lifetime. In 1932, she sold a screenplay to United Studios, but it was never produced. Finally, in 1935 her first produced play, a courtroom drama named The Night of January 16th, opened on Broadway to strong box office and reviews.

The following year, Rand succeeded in publishing her first novel, We the Living, based largely on her personal experience of life under the Communist system in the USSR.

During the 1940 presidential election, Rand became involved with the unsuccessful campaign of Republican candidate Wendell Willkie to unseat the incumbent Democrat, Franklin D. Roosevelt, running for an unprecedented third term.

Rand found that she enjoyed public speaking and had a special talent for deftly handling hostile questions from an audience. Through the Willkie campaign, she made the acquaintance of libertarian economist Henry Hazlitt, who in turn introduced her to Ludwig von Mises.

Rand is said to have been delighted when Mises once referred to her as “the most courageous man in America.” Rand always admired and measured herself against great men and was by no means a feminist in the contemporary sense of the term. Most of her literary protagonists, including Howard Roark (The Fountainhead) and John Galt (Atlas Shrugged), were men.

In 1943, Rand published The Fountainhead, the novel which many consider to be her masterpiece. It is about an architect who prefers to destroy a building he considers to be his greatest creation rather than to allow it to be taken away from him and used against his will.

In 1949, The Fountainhead was made into a hit movie of the same name, directed by King Vidor and starring Gary Cooper as Rand’s hero, Howard Roark. Rand wrote the screenplay.

In retrospect, one can see that The Fountainhead—which became an international bestseller, bringing Rand fame and financial security—was the perfect marriage of artistic subject matter with its author’s personality and philosophy. It is not too much to say that Rand took the abstract ideas of Austrian economics and laissez-faire, limited-government political philosophy and synthesized them into a single, powerful, easily grasped symbol.

Rand’s imaginative ability to put human emotional flesh onto the skeleton of an abstract idea also began to generate a vast amount of fan mail—the first sign of what would eventually become a veritable cult following.

Indeed, no small number of public figures, from former Fed chairman Alan Greenspan to Star Trek creator Gene Roddenberry to sitting US Senator Rand Paul, have spoken of the impact that Ayn Rand’s books and ideas have had on their lives.

In short, with the huge commercial success of both the book and the film version of The Fountainhead, Rand and her philosophy of freedom began to become a force to be reckoned with on the American public stage.

Rand followed up the outstanding success of The Fountainhead with an enormous novel she called Atlas Shrugged, published in 1957. Once again, the basic idea of the novel—that a handful of great men carry the weight of the world on their shoulders—is summed up masterfully by the symbol conveyed in the book’s title.

The main idea of Rand’s new book was to show how government interference in the free enterprise system leads to disastrous results. Atlas Shrugged does this by depicting the catastrophic consequences for society that follow when creative entrepreneurs and factory owners—their consciousness raised by Rand’s hero, John Galt—go out on strike in protest. Atlas shrugs, and the world he carries on his shoulder collapses.

Atlas Shrugged was another runaway bestseller and the apotheosis of the Rand cult. However, seeing that the book is a turgidly written tome of more than 1100 pages with cartoon characters, one suspects that more copies of it were purchased than were read.

However, it would be unfair to assess the achievement of Ayn Rand’s fiction by mainly aesthetic criteria. A literary giant, she wasn’t. A very significant tribune of free-market ideas in the American public square, she most certainly was.

After the commercial success of her fiction and the financial independence she now enjoyed, Rand was able to leave Hollywood behind and focus all her energies on an ambiguous, but ultimately successful, effort to gain intellectual respectability.

Over the remaining 25 years or so of her life, Rand published seven collection of essays. In addition, collections of her letters and journals appeared posthumously.

Not content to repackage the economic and political ideas explore through her fiction in nonfiction form, Rand undertook to develop an entire philosophical system, with her own distinctive epistemology and ontology, which she called “Objectivism.”

In a nutshell, Objectivism is a sort of empiricism, or positivism, which holds that action according to one’s own self-interest in accordance with reason (egoism) produces the best results both for individuals and for society at large.

Objectivist ethics basically derives from natural law theory, together with the primacy of the self-preservation instinct. It should perhaps be noted that Rand’s idea that egoism produces the best results for society as a whole can be traced back to Bernard de Mandeville’s Fable of the Bees, first published in 1714.

One of Rand’s most avid disciples, by the name of Nathaniel Branden, set about developing lecture series and classroom materials for courses offered through a company he founded and dubbed the Nathaniel Branden Institute (NBI).

However, in 1968, an ugly public split occurred between Rand and Branden. The quarrel became highly acrimonious, with Rand accusing Branden and the NBI (which promptly went out of business) of betraying her teachings.

Both Branden and his wife subsequently published books smearing Rand’s name and the repercussions of the rupture (reminiscent of that between Sigmund Freud and Carl Jung) among followers of Rand and Objectivism continued to be felt for many years (see Books about Ayn Rand and Objectivism below).

During the last 15 years of her life, Rand continued to publish nonfiction works with some regularity (see Ayn Rand’s Nonfiction Books below). Some of her nonfiction books were quite intellectually ambitious, while others merely rehashed her earlier work for a younger audience.

Rand also gave many well-attended public lectures around the world and even appeared occasionally on television, sitting for a widely watched interview with Mike Wallace, among others.

The Romantic Manifesto: A Philosophy of Literature (1969).

Books about Ayn Rand and Objectivism

Bernstein, Andrew, Objectivism in One Lesson: An Introduction to the Philosophy of Ayn Rand (2008).

Binswanger, Harry, How We Know: Epistemology on an Objectivist Foundation (2014).

Branden, Nathaniel, The Vision of Ayn Rand: The Basic Principles of Objectivism (2009).

Burns, Jennifer, Goddess of the Market: Ayn Rand and the American Right (2009).

Hoenig, Jonathan, ed., A New Textbook of Americanism: The Politics of Ayn Rand (2018).

Kelley, David, The Contested Legacy of Ayn Rand : Truth and Toleration in Objectivism (2000).

Torres, Louis and Michelle Marder Kamhi, What Art Is: The Esthetic Theory of Ayn Rand(2000).

Valliant, James S., The Passion of Ayn Rand’s Critics: The Case Against the Brandens (2006).