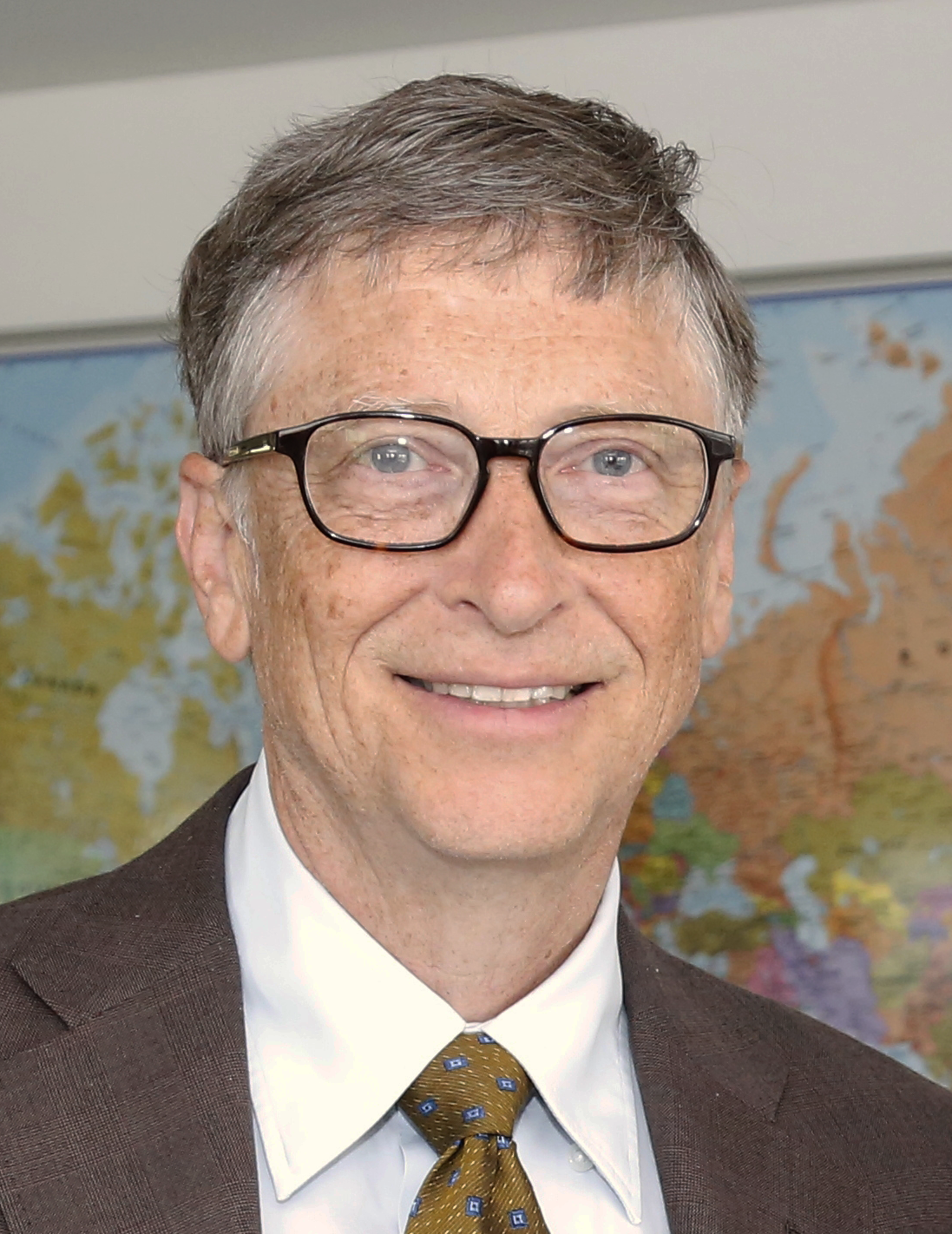 Gates’s father was a prominent lawyer, while his mother, the daughter of a bank president, sat on several corporate boards, including that of the Pacific Northwest powerhouse, First Interstate Bank.

As a child, Gates was small for his age and was bullied in primary school. His parents enrolled him in the Lakeside School, an elite Seattle college preparatory school.

Lakeside provided an early General Electric computer for the use of students. Gates has said that he wrote his first program for that computer—an implementation of tic-tac-toe written in BASIC—when he was 13 years old.

There is a photo of the young Gates sitting at a printer terminal at the Lakeside School next to his friend and future business partner, Paul Allen.

However, the friends quickly got into trouble by using a computer donated to Lakeside by a local Seattle computer firm to hack into the company’s mainframe to obtain free computing time. They were quickly caught and banned from using the company’s equipment for a period of time.

At the end of the ban, Gates and his friends actually convinced the computer company to hire them to help out with various computing tasks, such as debugging programs. In this way, the Lakeside Programmers Club became a for-profit business.

Lakeside School itself hired Gates and Evans to set up and administer their class-scheduling system. The two fast friends hoped to present the system as their senior thesis.

Unfortunately, Evans was killed (at age 17) in a climbing accident—which Gates has described as one of the saddest days of his life. Allen then stepped in and helped Gates finish the system.

Later the same year, while still 17, Gates and Allen formed a business partnership to mine highway traffic data for purposes of better designing highway systems. However, due to the inexperience of the young programmers, the business did not succeed.

Gates graduated from Lakeside in 1973. At the time, he intended to enroll in a pre-law program. After a summer internship as a Congressional page, he entered Harvard College.

While at Harvard, Gates took a course in combinatorics taught by the computer scientist Harry R. Lewis. As a class project, Gates created an algorithm for solving the “pancake sorting problem,” which is the minimum number of flips of a spatula required to sort by size a disordered stack of  pancakes.

Gates’s algorithm produced a result that was not improved upon for more than 30 years. He wrote up his work for publication with Christos Papadimitriou as co-author.

During the summer of 1974—between his freshman and sophomore years—Gates got a job with Honeywell Information Systems (as it was then called), where his high school chum Paul Allen was already employed.

After one more year, Gates dropped out of Harvard in order to join Allen in an effort to start their own software company. Initially, they intended to produce products for the new Altair 8800 computer just introduced by Micro Instrumentation and Telemetry Systems (MITS).

Gates and Allen decided to call their new company “Microsoft,” from “microcomputer” (the original term for personal computers) and “software.”

Gates and Allen contacted MITS and asked for a meeting to demonstrate what they claimed was their Basic interface for the Altair 8800.

When MITS accepted to meet with Gates and Allen in Albuquerque, New Mexico, the friends had to work furiously to write the code, which in reality did not yet exist.

They met the deadline and the meeting in Albuquerque was successful. When MITS brought their Microsoft Basic interpreter to market, it proved to be very popular, as well.

Microsoft was officially incorporated in the state of New Mexico in 1976.

Three years later, in 1979, Gates and Allen decided to go their own way and moved their headquarters to Bellevue, a city on the eastern shore of Lake Washington directly across from Seattle, Gates’s and Allen’s hometown.

The next year, 1980, International Business Machine Corporation (IBM) hired Microsoft to produce an operating system for the original IBM PC.

Gates, in turn, obtained an exclusive license from the computer programmer Tim Paterson for the distribution of the 86-DOS operating system he had created. Microsoft then allowed IBM to use 86-DOS for a fee.

Gates foresaw that other companies would soon copy IBM’s PC. For this reason, he insisted on retaining copyright to 86-DOS. Microsoft later bought out Paterson’s interest in operating system, as well.

While the 86-DOS arrangement with IBM earned Microsoft only a relatively small fee, Gates’s and Allen’s company went from being unknown to being a partner of IBM. The enormous prestige that accrued to Microsoft from this partnership lay at the foundation of its rapid rise to market dominance.

Microsoft’s success was cemented by the enormous popularity of the radically new and user-friendly interface Windows, which the company brought to market in 1985.

Gates has said that he personally read and rewrote every line of code that Microsoft produced during its first five years. However, for the bulk of its history, Gates functioned as the company manager and CEO.

By all accounts, Gates is not a people person. Intensely competitive, he could be dismissive and inordinately demanding of his subordinates in Microsoft.

In the 1980s, Gates was involved in a bitter personal dispute with his old friend Allen, after which Allen took a much less-active role in the company he helped create.

During the 1990s, Gates slowly began to transition from his management of Microsoft to developing his many philanthropic interests. In 2000, he merged several of his earlier philanthropies to create the Bill and Melinda Gates Foundation, which has grown into the largest charitable organization in the world.

In 2008, Gates stepped down from active, day-to-day management of Microsoft to devote himself to philanthropic endeavors.

Among the causes he has taken up are the global warming controversy and, recently, the CPVID-19 pandemic (see “Books by Gates” below).

Bill Gates’s personal fortune is estimated to amount to some $110 billion.

Business at the Speed of Thought: Succeeding in the Digital Economy (1999).

How to Avoid a Climate Disaster: The Solutions We Have and the Breakthroughs We Need (2021).

Bill Gates—In His Own Words: Taken from Interviews and Podcasts, edited by Raphael Afil (2021).

Selected Books About Gates and Microsoft

Chandomba, Lyton, Secrets of Success from the Story of Bill Gates: It is Possible (2019).

Leibovich, Mark, The New Imperialists: How Five Restless Kids Grew Up to Virtually Rule Your World (2002).

MacGregor, J.R., Bill Gates: The Man Behind Microsoft: A Look at the Man Who Changed the World We Live In (2018).

Manes, Stephen and Paul Andrews, Gates: How Microsoft’s Mogul Reinvented an Industry–and Made Himself the Richest Man in America(1992).

Nadella, Saitya, Hit Refresh: The Quest to Rediscover Microsoft’s Soul and Imagine a Better Future for Everyone (2019).

Rivlin, Gary, The Plot to Get Bill Gates: An Irreverent Investigation of the 19World’s Richest Man . . . and the People Who Hate Him (1999).

Wallace, James and Jim Erickson, Hard Drive: Bill Gates and the Making of the Microsoft Empire (1992).