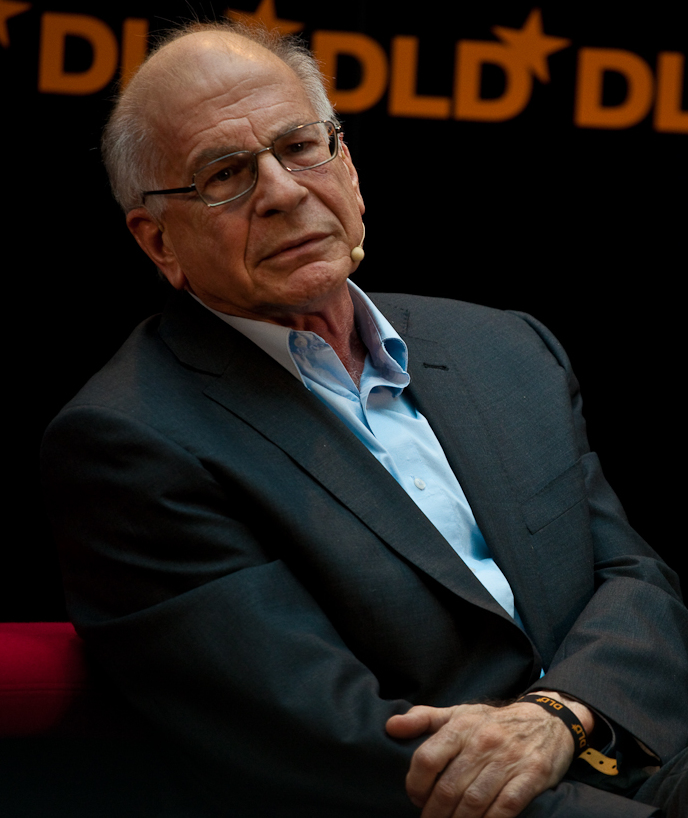 Daniel Kahneman (b. 1934) was born in Tel Aviv into a Jewish family in what was then Mandatory Palestine and is now the State of Israel.

Kahneman’s parents had emigrated from Lithuania to France during the 1920s, but his mother had traveled to Tel Aviv to be with her own parents for her upcoming confinement.

Kahneman was raised and attended elementary school in Paris. His father was arrested by the Nazis in 1940 soon after they marched into Paris.  However, thanks to the intervention of his employer, who had ties with the underground, pro-Nazi French militia group, La Cagoule [The Cowl], he was released after six weeks of imprisonment.

The Kahneman family spent the rest of World War II keeping a low profile and avoiding interaction with the German occupying forces. They were forced to change their place of residence several times. Kahneman has written movingly about how the complexity of life under conditions of war and military occupation helped shape him into a psychologist.

For example, he recalls encountering a German soldier in the street in Paris who was wearing the feared black uniform of the SS, the Nazi Party’s elite military corps. When the soldier beckoned to him, Kahneman was afraid he had guessed he was a Jew. The boy was surprised when, instead of arresting him, the soldier showed him a photo of his own son, gave him some money, and sent him on his way.

Towards the end of the war, Kahneman’s father died of natural causes. After the war was over, his mother took her children back to Tel Aviv to be with her birth family. One of his father’s brothers was a prominent rabbi at a yeshiva in Bnei Brak, east of Tel Aviv, as well. The Kahnemans arrived as immigrants to Mandatory Palestine in 1948, on the eve of the war-torn creation of the State of Israel.

Kahneman graduated from high school in Tel Aviv and then attended college at the Hebrew University of Jerusalem, where he majored in psychology and minored in mathematics.  In 1954, he received his bachelor’s degree from Hebrew University.

For the next several years, Kahneman served in the Israeli armed forces, where, among other things, he was put to work developing assessment tests for prospective candidates for officer training.

In 1958, Kahneman traveled to the US for his graduate training at the University of California, Berkeley. In 1961, he received his PhD in psychology from UC-Berkeley.

Kahneman received his first academic position in 1961 as a lecturer in psychology at Hebrew University. He was promoted to the position of senior lecturer in 1966.

During the mid-1960s, Kahneman also held several visiting professorships abroad, including at the University of Michigan, Cambridge University, and Harvard University.

Beginning in the late 1960s and extending through the 1970s, Kahneman participated in an important collaboration with one of his Hebrew University colleagues, the cognitive psychologist Amos Tversky. Kahneman and Tversky co-authored a series of important papers on several subjects, including their highly influential work on cognitive biases and other departures from strict rationality exhibited by human beings when making decisions.

Kahneman’s and Tversky’s collaborative publications on the latter topic—which proved to be foundational for the new discipline of behavioral economics—constituted the work for which Kahneman was awarded the Nobel Prize in 2002. Unfortunately, Tversky’s vital role in their partnership went unrecognized by the Nobel Committee, because he had died in 1996 and Nobel Prizes are not awarded posthumously.

During the academic year 1978–1979, Kahneman and Tversky were both fellows at Stanford University’s Center for Advanced Study in the Behavioral Sciences (CASBS). By coincidence, the economist Richard Thaler was also in residence at CASBS that year and became friends with Kahneman.

Thaler independently published several seminal papers on behavioral economics, notably, “Toward a Positive Theory of Consumer Choice” (Journal of Economic Behavior and Organization, 1980, 1: 39–60). Thanks to this convergence in their interests, Kahneman began collaborating with Thaler, as his joint work with Tversky gradually tapered off.

In 1978, Kahneman was hired as a full Professor of Psychology by the University of British Columbia in Vancouver, Canada. In 1984, he began a two-year stint as an Associate Fellow with the Toronto-based Canadian Institute for Advanced Research.

In 1986, Kahneman obtained a position as Professor of Psychology at UC-Berkeley, where he taught until 1993, apart from a one-year visiting professorship with the New York–based Russell Sage Foundation.

In 1994, Kahneman moved to Princeton, where he is currently Professor of Psychology and Public Affairs, Emeritus, at the Princeton School of Public and International Affairs (formerly the Woodrow Wilson School).

Since 2000, Kahneman has also been a Fellow with Hebrew University’s Federmann Center for the Study of Rationality.

Kahneman has made important contributions to several areas of cognitive psychology, including hedonic psychology, but it is his pioneering research, especially in collaboration with Amos Tversky, leading to the foundation of the new discipline of behavioral economics, which is of primary concern to us here.

The crux of Kahneman’s and Tversky’s work is the idea of “bounded rationality,” which in a nutshell is the idea that real-life human decision-making falls short of ideal rationality in various systematic ways.

In economics, these instances of “irrationality” are equivalent to departures from the central classical-economic assumption that human beings are purely rational “utility-maximizing” actors.

Among the best known of these ways of departing from ideal rationality are the following:

These are only a modest sampling of the many ways Kahneman and Tversky found human decision-making to be influenced by a host of cognitive biases and emotional factors.

In his later academic work, and in his 2011 popular book, Thinking, Fast and Slow, Kahneman sought to explain the existence of this empirically demonstrated “irrationality” through considerations derived from evolutionary theory.

In essence, Kahneman claimed that there are two separate cognitive systems, one for fast reactions in dynamic situations requiring immediate action, and the other for reflection and planning.

In the former types of situations, we simply have no time to perform complex logical deductions and must act according to imperfect but “good-enough” rules of thumb.

Kahneman’s work on bounded rationality has not only been extraordinarily influential within the disciplines of cognitive psychology and behavioral economics, it has also spurred a cottage pop-philosophy industry of books lamenting humanity’s supposed “irrationality.”

However, this is absurd. As Kahneman’s own later, evolutionary-tinged work implies, the ideal of rationality attained by human beings in such disciplines as logic and mathematics was irrelevant to our survival during the vast bulk of our evolutionary history.

A fast reasoning process that was good enough was in fact much better than an ideally perfect one that was too slow to be of any practical use.

From this point of view, we can see that finite human reasoning, with all its imperfections as judged by an ideal standard, may nevertheless be entirely “rational.”

1. Works Authored or Co-authored by Kahneman

“Availability: A Heuristic for Judging Frequency and Probability,” with Amos Tversky, Cognitive Psychology, 5: 207–232 (1973).

“Maps of Bounded Rationality: A Perspective on Intuitive Judgment and Choice,” Nobel Lecture (2002).

Noise: A Flaw in Human Judgment, with Olivier Sibony and Cass R. Sunstein (2021).

Judgment Under Uncertainty: Heuristics and Biases, with Paul Slovic and Amos Tversky (1982).

Well-Being: The Foundations of Hedonic Psychology, with Ed Diener and Norbert Schwartz (1999).

Heuristics and Biases: The Psychology of Intuitive Judgment, with Thomas Gilovich and Dale W. Griffin (2002).

Lagnado, David and Daniel Read, eds., Judgement and Choice: Perspectives on the Work of Daniel Kahneman (2008).

Lewis, Michael, The Undoing Project: A Friendship That Changed Our Minds (2016).