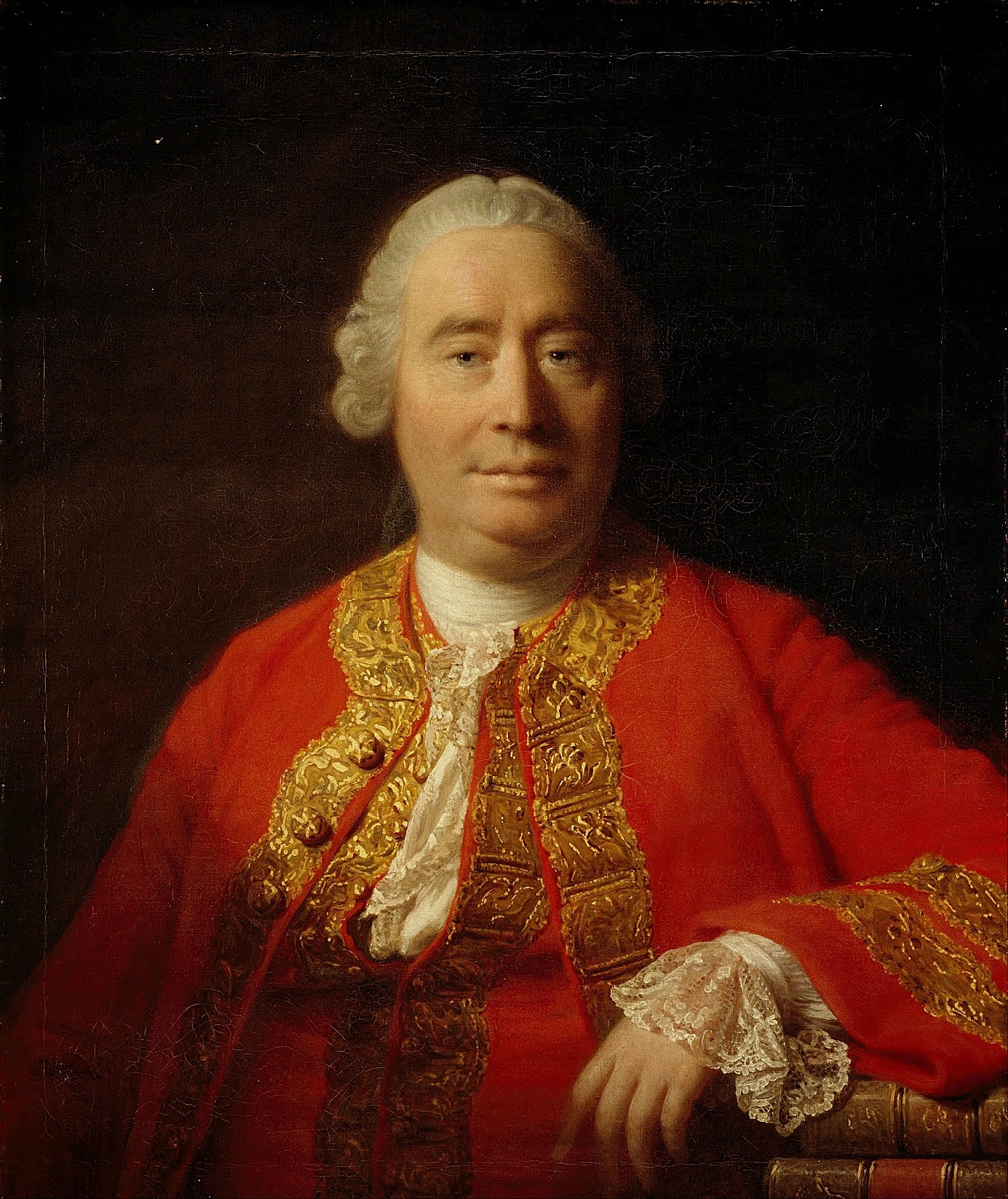 David Hume (1711–1776) was born in Edinburgh, Scotland. His father was an attorney and his mother the daughter of a judge.

Hume’s father had been raised on a family estate in Berwickshire, south of Edinburgh on the border with Yorkshire in England. Hume lived there on and off for much of his life.

The family name was originally spelled “Home,” but the ambitious young philosopher changed the spelling when he was 23 years old to conform more closely to the pronunciation, seeing that the name was not widely known in England.

Hume’s father died when he was two years old. His mother, who never remarried, raised her son and his two siblings on her own on the very slender resources left to her by her late husband.

Something of a prodigy, Hume entered the University of Edinburgh at the age of 12, or possibly even earlier (14 was the normal age of admittance to university at the time).

. . . there is nothing to be learnt from a Professor, which is not to be met with in Books.

At the age of 18, Hume seems to have been inspired by a first glimpse of the set of novel empiricist ideas regarding human knowledge and morality for which he would eventually become internationally celebrated.

For the next seven years, Hume embarked upon an intensive course of rigorous self-study. However, this program eventually resulted in a breakdown in his health. A doctor’s prescription of less study and better food and drink seems to have restored him to health.

It may also have set him on a course to the obesity which bemused the elegant ladies who ran the toniest salons of the French Enlightenment, where Hume became a much-honored guest later in life.

Though he had been living during his period of study with his mother on the family estate in Berwickshire, by the time he was 25 years old Hume’s economic situation had become dire. He had to find a job.

Hume briefly served as a merchant’s assistant. During a visit to the Continent on behalf of his employer, he entered into a series of discussions with the professors at the Jesuit College of La Flèche—where René Descartes had been educated a bit more than 100 years earlier.

In 1739, at the age of 28, Hume published the compendious fruit of his long and concentrated intellectual labors: A Treatise of Human Nature. Unfortunately, in the philosopher’s own words, the book “fell dead-born from the press.”

Hume applied for a number of academic positions around this time, but his heterodox religious beliefs posed an insurmountable obstacle to his aspirations in that direction.

In 1741, Hume published a collection of his essays entitled Essays Moral and Political (see “Selected Works of Hume on Economics” below). This work underwent two major subsequent editions.

In 1752, a volume containing only essays on what we would now call “political economy” was published under the title, Political Discourses.

Then, an expanded, two-volume edition, entitled Essays Moral, Political, and Literary, was published in 1754. This edition reproduces all of Hume’s economic-related writings (in Part II; see below) and has the added advantage of being the most-easily attainable of the three editions today.

Over the next two decades, Hume worked on and off for wealthy individuals in various capacities, principally as tutor or as personal secretary.

Essentially rewriting the Treatise to make it more user-friendly, Hume published An Enquiry Concerning Human Understanding in 1748, followed by its sequel, An Enquiry Concerning the Principles of Morals, in 1751. However, in financial terms the new works were no more successful than the earlier one had been.

Hume’s breakthrough with the reading public finally came with his History of England, published in six volumes between 1754 and 1761, which became a bestseller.

The literary success of the History opened other doors for Hume, as well. In 1763, he was appointed a secretary with the British embassy in Paris. In 1765, he was promoted to the title of chargé d’affaires.

It was at this time that he became something of an intellectual celebrity, being widely fêted by the philosophes, including the likes of Jean-Jacques Rousseau.

Returning to England in 1767, Hume was appointed Under Secretary of State for the Northern Department by the British government.

Two years later, in 1769, Hume took up residence in Edinburgh, where he spent his last years until his death in 1776.

At Hume’s side on his deathbed sat one of his oldest and closest friends, the great Scottish Enlightenment thinker, Adam Smith—the “father of economics.” Smith freely admitted the influence that Hume had upon his own thinking about political economy.

Hume is of course primarily known as an eminent philosopher—by many accounts, the greatest philosopher the English-speaking world has ever produced. However, the present brief discussion will be limited to his ideas on political economy.

Hume contributed at least three influential ideas to the history of economic thought.

First, he argued that that economic freedom is a necessary condition for political freedom, making him one of the earliest exponents of what would come to be called “classical liberalism.”

Second, Hume insisted in all his philosophical work that there is a fundamental conceptual gap between factual assertions and value judgments. This distinction is of the first importance for economic science.

Economists are expected to rigorously distinguish their positive claims (what is the case) from their normative claims (what they think ought to be the case). Hume’s philosophical principle is often referred to by the maxim “you cannot infer ought from is.”

Third, Hume made important contributions to the quantity theory of money.

After noting that prices in a country are causally linked to changes in the money supply, Hume further observed that “mercantilism” (the protectionist system of tariffs and price supports) could not achieve its goal of increasing a nation’s wealth because increasing net exports would cause an increased flow of gold specie into the country to pay for the exported goods.

Hume concluded that the influx of gold into the country to pay for increased net exports would cause the price of domestic goods to rise, reinstating the status quo ante and defeating the original purpose of the protectionist measures.

Today, economists refer to Hume’s analysis as the “price-specie-flow mechanism.”

Selected Books About Hume and His Political Economy

Arnon, Arie, Monetary Theory and Policy from Hume and Smith to Wicksell: Money, Credit, and the Economy(2010).

Rasmussen, Dennis C., The Infidel and the Professor: David Hume, Adam Smith, and the Friendship That Shaped Modern Thought (2017).

Rostow, W.W., Theorists of Economic Growth from David Hume to the Present (1992).

Sabl, Andrew, Hume’s Politics: Coordination and Crisis in the History of England (2012).

Schabas, Margaret and Carl Winnerlind, A Philosopher’s Economist: Hume and the Rise of Capitalism(2020).

Wei, Jia, Commerce and Politics in Hume’s History of England (2017).