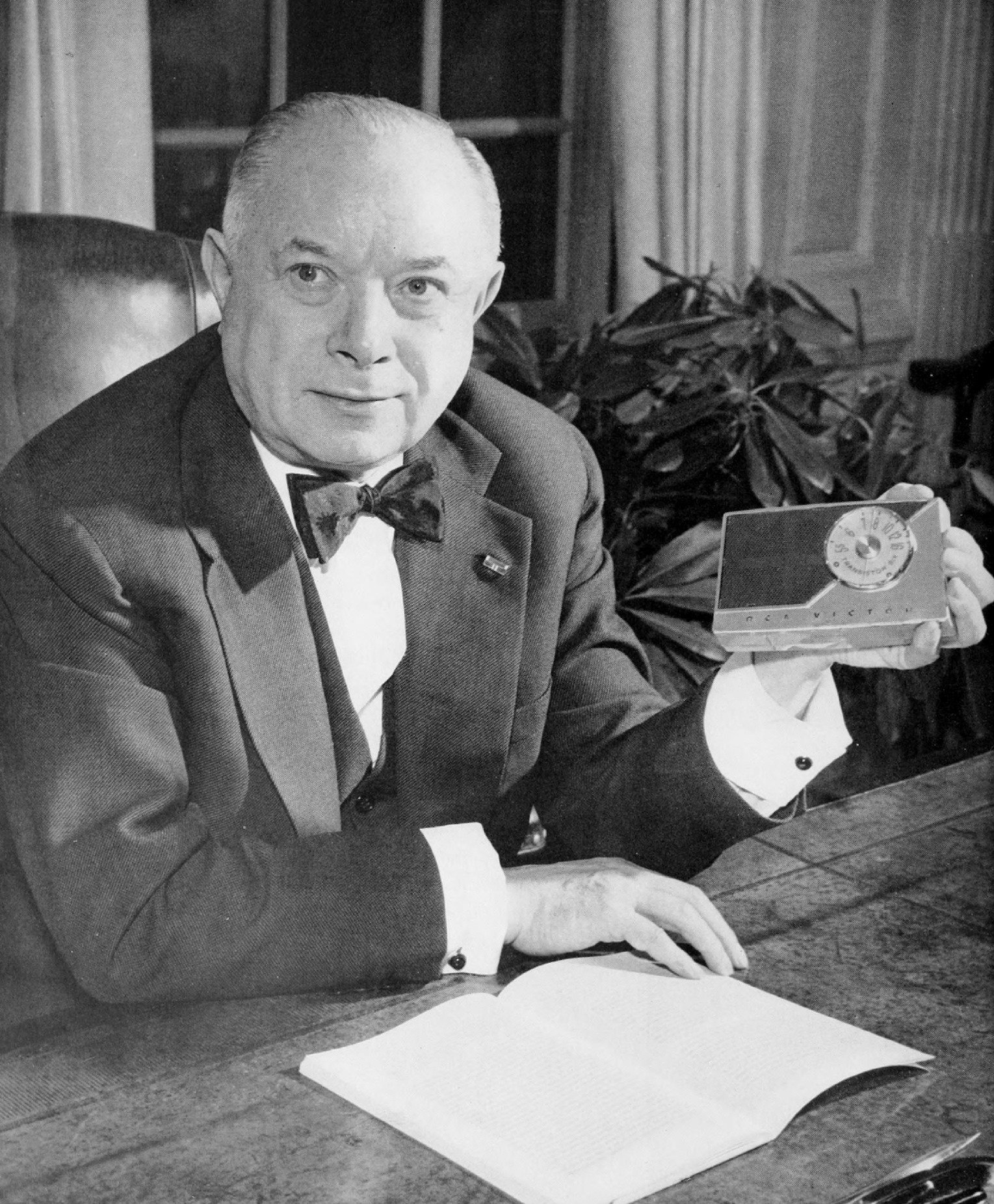 David Sarnoff (1891–1981) was born into a Jewish family in the town of Uzlyany, about 30 miles south of Minsk, in the part of the Russian Empire that is now the independent state of Belarus.

The young David attended a cheder, a traditional Jewish elementary school, where he would have been instructed in Jewish culture and the Hebrew language, in addition to arithmetic and reading and writing in Russian.

Sarnoff’s father left for the US while David was still a young boy to establish a beachhead for bringing over the rest of the family.

In 1900, David, his mother, and his four siblings traveled to New York City to join the father. The boy immediately set to work delivering newspapers before and after school to help keep the family afloat financially.

In 1906, David’s father became disabled due to the effects of tuberculosis and David had to begin working full-time to support his family. He was 15 years old.

The young Sarnoff was interested in making a career in the newspaper business. However, after an encounter with anti-Semitism—his boss refused to give him time off for Rosh Hashanah—he pursued a job instead with the Marconi Wireless Telegraph Company of America.

Sarnoff started off as an office boy. Over the next 13 years, he gradually rose up through the ranks, eventually holding the title of Commercial Manager with the Marconi Company.

At the same time, Sarnoff was learning about the technology and the business of “wireless” (radio) communications, both through on-the-job training and by studying on his own in the public library after working hours.

In time, Sarnoff became adept in the installation and use of radio equipment. He was assigned to work as an operator at various stations on land and aboard ships.

In 1911, Sarnoff installed a radio set on board a seal-hunting vessel bound for the coast of Labrador, and then sailed with the ship as its radio operator.

During this voyage, Sarnoff personally relayed the first known remote medical diagnosis and therapeutic instructions between the ship’s doctor and a doctor attached to a seasonal fishing station on the uninhabited island of Belle Isle, to aid in the treatment of a hunter suffering from an infected tooth.

The following year, 1912, Sarnoff claimed to have been involved in relaying information about the sinking of the RMS Titanic and the fate of its survivors by radio over a continuous period of three days. However, modern historians have questioned the plausibility of his account.

Over the next several years, Sarnoff was involved in installing radio equipment on railroad rolling stock. During this period, he also became well-acquainted with such recent inventions as H.J. Round’s hydrogen-arc transmitter and E.H. Armstrong’s “regenerative” (positive-feedback) FM receiver.

Before Sarnoff, most early radio inventers and entrepreneurs had focused their attention on point-to-point transmission (from one transmitter to one receiver).

Sarnoff was among the first to appreciate the vast potential for point-to-mass radio transmission (one transmitter to many receivers).

In 1919, the General Electric Company bought out the Marconi Wireless Telegraph Company and renamed it the Radio Corporation of America (RCA).

Sarnoff spent the next couple of years trying to convince RCA’s upper management of the practicability of his idea of point-to-mass radio transmission.

Finally, in 1921, Sarnoff was successful in helping to put together an international boxing match, billed as the “Fight of the Century,” between world heavyweight champion Jack Dempsey and light-heavyweight title-holder Georges Carpentier. (Dempsey knocked out Carpentier in the fourth round.)

The Dempsey-Carpentier fight was a nationwide sensation. It was the first boxing match in history to take in a “gate” in excess of $1 million.

Sarnoff oversaw the ground-breaking live radio broadcast of the event. It is estimated that about 300,000 listened to the live broadcast. More importantly, the fight provided a huge stimulus to the demand for home radio receiving equipment.

For Sarnoff, the success of the broadcast of the Dempsey-Carpentier fight represented a proof of concept. It became clear to him, and more importantly to his superiors, that radio broadcasting represented an enormous business opportunity.

In 1925, RCA bought its first radio station, WEAF in New York City. Using this station as a base, Sarnoff founded the National Broadcasting Corporation (NBC) with the aim of creating a nationwide network of radio stations.

Yet another company, the American Broadcasting Company (ABC), later hived off from NBC.

Constantly thinking about ways of expanding his business interests, Sarnoff was instrumental in the creation of a new Hollywood film studio in 1928, namely, RKO Pictures, Inc. (the “R” stands for “radio”).

In 1929, Sarnoff was appointed President of RCA.

During this period, Sarnoff was instrumental in establishing AM radio as the broadcasting standard during most of the twentieth century.

Most important of all, Sarnoff was instrumental in the commercialization of television.

From his perch as President of RCA, Sarnoff had been thinking about the theoretical potential of the wireless transmission of photograph images for some time.

Zworykin, who had been experimenting unsuccessfully with television transmission for several years, had recently invented a new system that showed great promise. In developing his system, Zworykin had benefited from visiting the laboratory of Philo T. Farnsworth.

Farnsworth, who is usually cited as the individual most responsible for the invention of television, had made a public demonstration of his own equipment’s capabilities two years earlier, in 1928.

In 1931, Zworykin came up with a workable television transmitter tube. Farnsworth, who had turned down a buyout offer from Sarnoff and was by then employed by the Philadelphia Battery Company (Philco), filed a lawsuit against RCA for patent infringement.

After an epic, decade-long legal battle, RCA agreed to enter into a multi-year licensing agreement with Farnsworth that was worth about $1 million at the time. This settlement gave RCA a free hand to develop and market television cameras and receiving units.

However, the further commercialization of television was delayed by World War II until the end of the 1940s.

During the war years, Sarnoff worked closely with the US military to help ensure the smooth development of radio transmission capability among America’s fighting forces.

In 1945, in acknowledgement of his services to his adopted country, Sarnoff was given an honorary Brigadier General’s star. In later life, he insisted on being addressed by his employees as “General Sarnoff.”

During the “cold-war” competition between the US and the USSR that followed hard on the heels of the Second World War, Sarnoff played an important role in convincing General George C. Marshall to establish the Voice of America and Radio Free Europe.

During the early 1950s, the black-and-white television set became a standard feature of virtually every American home. Sarnoff’s NBC was one of the “big three” broadcasting companies that dominated the airwaves for decades to come, along with the NBC-offspring company ABC and the Columbia Broadcasting System (CBS)—originally a subsidiary of the Columbia Phonograph Company (Columbia Records).

Never one to rest on his laurels, Sarnoff next entered into a race with NBC’s main rival CBS to be the first to patent a practical process for transmitting television images in color.

Once again, a legal battle-royale ensued, from which Sarnoff once again emerged victorious.

During the late 1950s and the 1960s, color receivers manufactured by RCA gradually replaced the old black-and-white TV sets in virtually every American home.

Sarnoff retired as President of RCA and NBC in 1970, at the age of 79, and died the following year.

Sarnoff was a man of deeds, not words.

He was an entrepreneur and a businessman, not an inventor or an engineer.

But above all, Sarnoff was a visionary.

Undoubtedly, his greatest single achievement was his inspired insight into the vast commercial potential of point-to-mass radio transmission—that is, what we now call “broadcasting.”

In developing that idea, Sarnoff in effect set the capstone on the edifice whose foundations had been laid in 1895 when Guglielmo Marconi made his breakthrough to the invention of “wireless telegraphy” (radio).

Sarnoff’s later contributions to black-and-white and color television were also highly significant, but they chiefly consisted in bringing the work of others into fruitful juxtaposition, building on ideas that were already “in the air.”

By essentially coming up with the concept of broadcasting, on the other hand, Sarnoff had an idea that changed the daily texture of human life for hundreds of millions of people all over the planet over the course of the twentieth century.

Television: Collected Addresses and Papers on the Future of the New Art and Its Recent Technical Developments (two volumes) (1936–1937).

The Wisdom of Sarnoff and the World of RCA, edited by Leon Gutterman (1967).

Looking Ahead: The Papers of David Sarnoff (1968).

Bilby, Kenneth, The General: David Sarnoff and the Rise of the Communications Industry (1986).

Camenzind, Hans, Much Ado about Almost Nothing: Man’s Encounter with the Electron (2007).

Schwartz, Evan I., The Last Lone Inventor: A Tale of Genius, Deceit, and the Birth of Television (2002).

Woolley, Scott, The Network: The Battle for the Airwaves and the Birth of the Communications Age (2016).