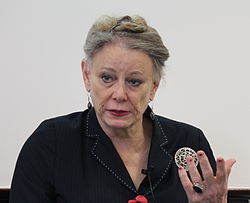 In 1968, McCloskey was appointed an assistant professor of economics at the University of Chicago. She was promoted to associate professor in 1973 and received tenure in 1975. She continued teaching at Chicago through 1980.

In 1980, McCloskey was hired by the University of Iowa as a full professor. In 1984, she was appointed Chair of the Iowa Economics Department, a post she retained until leaving Iowa in 1999.

In 1996, McCloskey also served as a visiting professor at Erasmus University in Rotterdam.

Since 2000, McCloskey has taught at the University of Illinois at Chicago, where, since 2015, she has been Distinguished Professor of Economics and History and Professor of English and Communication, Emerita.

In 1995—at the age of 53, after 30 years of marriage, and after fathering two children—Donald N. McCloskey transitioned to being a woman and took the name Deirdre N. McCloskey.

McCloskey calls herself a “classical liberal”—as did Friedrich A. Hayek. This means that she subscribes to the principles first articulated by Adam Smith and his followers, and later by Carl Menger and the Austrian school of economics: namely, freedom of economic activity and entrepreneurship, free trade, free markets, low taxes, laissez-faire, and limited government.

McCloskey is probably best known for her “Bourgeois” trilogy: Bourgeois Virtues (2006), Bourgeois Dignity (2010), and Bourgeois Equality (2016) (see McCloskey’s Major Works below). In these volumes, she traces the history of the ideas associated with the rise of the merchant class (“bourgeoisie”), which she maintains was the most important factor in the success of the industrial revolution, which in turn led directly to the extraordinary enrichment, or “mass flourishing,” of England and then Western civilization as a whole.

McCloskey’s main thesis in the trilogy is that ideas are more important than social institutions, as the latter in fact depend upon the former. The three books focus on the following topics:

McCloskey’s claim is that these three factors best explain the meteoric historical rise of the West to its unprecedented position of wealth and influence on the world stage.

The Bourgeois trilogy has been met with much acclaim, but also with not a little controversy. Economists as a group tend to elevate material explanatory factors above ideological ones. For this reason, most of the profession has remained respectful of McCloskey’s enormous synthetic labors in the trilogy, but skeptical of her explanatory emphasis on ideas.

McCloskey’s publishing career spans 50 years and she is the first to admit that she has changed her mind on many matters over that long period of time. She has sketched an outline of the history of her economic thinking in the following paper: “Apologia Pro Vita Sua: A History of My Economic Opinions.”

McCloskey is hugely prolific. She has published some 120 peer-reviewed scholarly articles, as well as some 250 reviews, popular essays, op-eds, and other short pieces. Still more impressively, she has published more than 20 single-authored or co-authored books and has edited or co-edited another nine scholarly volumes.

McCloskey has also participated in nearly 90 interviews and 50 podcasts, all of which may be accessed through her personal website. She also maintains a blog titled “Prudentia” on her website.

Enterprise and Trade in Victorian Britain: Essays in Historical Economics (1981).

If You’re So Smart: The Narrative of Economic Expertise (1990).

Knowledge and Persuasion in Economics (1994).

The Vices of Economists, the Virtues of the Bourgeoisie (1997).

The Bourgeois Virtues: Ethics for an Age of Commerce (2006).

The Cult of Statistical Significance: How the Standard Error Costs Us Jobs, Justice, and Lives,with Stephen T. Ziliak (2008).

Bourgeois Equality: How Ideas, Not Capital or Institutions, Enriched the World(2016).

Why Liberalism Works: How True Liberal Values Produce a Freer, More Equal, Prosperous World for All (2019).

The Myth of the Entrepreneurial State (2020).

Leave Me Alone and I’ll Make You Rich: How the Bourgeois Deal Enriched the World, with Art Carden (2020).

Historical Impromptus: Notes, Reviews, and Responses on the British Experience and the Great Enrichment (2020).

Bettering Humanomics: A New, and Old, Approach to Economic Science (2021).

Beyond Positivism, Behaviorism, and Neoinstitutionalism in Economics (2022).

The Rhetoric of the Human Sciences: Language and Argument in Scholarship and Public Affairs, with John S. Nelson and Allan Megill (1987).