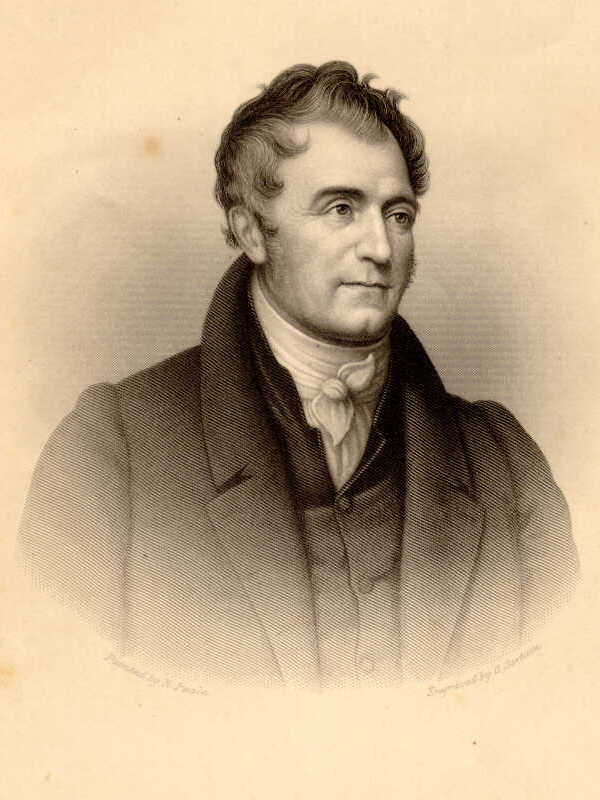 Éleuthère Irénée du Pont de Nemours (1771–1834) was born in Paris, France. His family were Huguenots (Protestants). His given names derive from the Greek words for “freedom” [eleutheria] and peace [eirēnē], respectively.

In 1785, du Pont fils entered the Collège Royal (now Collège de France) in Paris. Two years later, he was accepted as an apprentice by the pioneering chemist Antoine Lavoisier, who was a friend of his father’s.

Éleuthère Irénée began to work with Lavoisier at the Régie des poudres et salpêtres [Administration for Gunpowder and Saltpeter]. There, he learned about the extraction of nitrates and the manufacture of gunpowder.

A few years later, Du Pont followed his mentor when the latter relocated to a provinicial government munitions facility. However, in 1792 Lavoisier lost his position (he would eventually lose his life during the Reign of Terror) and Éleuthère Irénée returned to Paris, where he joined his father in a publishing endeavor the elder man had begun with money he had borrowed from Lavoisier.

Both the father and the son were initially sympathetic to the Revolution. They published a pro-Republican newspaper, and the father was even a member of a Jacobin militia.

However, the Du Ponts refused to go along with the arrest and execution of King Louis XVI and his Queen, Marie Antoinette. In fact, they were involved in the physical defense of the royal couple when the Tuileries palace was stormed by a mob in August of 1792.

This defense effort, of course, failed. The king and queen were taken prisoner (and were eventually guillotined), while Pierre Samuel was arrested and condemned to death, as well.

Du Pont père was awaiting execution when the Thermidorian Reaction occurred on 9 Thermidor, l’An II (July 27, 1794), leading to the fall of Maximilien Robespierre and an end to the Reign of Terror.

Even so, the family continued to suffer from ongoing agitation against the nobility, culminating in the sacking of the Du Pont family home in 1797.

Two years later, in 1799, the whole family moved to the United States. They arrived in Newport, Rhode Island, on New Year’s Day of 1800.

The mill began producing gunpowder for the market in 1804. The methods Du Pont had learned during his time working with Lavoisier made his product better than any other powder produced in North America.

The Du Pont company would go on to become one of the most-successful corporations in the America. By the middle of the nineteenth century, Du Pont was the largest purveyor of gunpowder to the US military. During the Civil War, about 40-percent of the Union Army’s gunpowder supplies were met by the company.

Du Pont was also the founder of an enduring dynasty of influential individuals on the American business, high-society, and political scene. Among the most prominent of them were the following.

After Éleuthère Irénée died, his sons, Alfred V. du Pont and Henry du Pont, assumed the management of the company and the mill.

Among the next generation of grandchildren, born around mid-century, Alfred I. du Pont not only inherited money from his family, but also founded a real estate and banking empire in Florida, becoming a multimillionaire and socialite in his own right.

Finally, among the great-grandchildren, born towards the end of the nineteenth century, we may mention Henry F. du Pont, a noted art collector, animal breeder, and horticulturalist, and Pierre S. du Pont, an entrepreneur and financier, who struggled with Alfred P. Sloan, Jr., for control of the General Motors corporation, as well a board member of the group that built the Empire State Building.

It is worth noting that Henry F. du Pont came by his interest in animal breeding and horticulture honestly, seeing that botany was one of Éleuthère Irénée’s scientific avocations.

Over time, the Du Pont company expanded its operations from gunpowder and explosives to general industrial chemistry. The company pioneered the development of such well-known products as paint, nylon, and—controversially—napalm.

Du Pont Farmers’ Handbook: Instructions in the Use of High Explosives for Clearing Land, Planting and Cultivating Trees, Drainage, Ditching and Subsoiling (1911).

The History of the E.I. Du Pont de Nemours Powder Company; A Century of Success(1912).

Dupont: The Autobiography of an American Enterprise; The Story of E.I. Du Pont de Nemours & Company, Published in Commemoration of the 150th Anniversary of the Founding of the Company on July 19, 1802 (1952).

History of Du Pont at the Savannah River Plant (1990).

Ferraro, James L., Blindsided: The True Story of One Man’s Crusade Against Chemical Giant DuPont for a Boy with No Eyes (2019).

Kinnane, Adrian, DuPont: From the Banks of the Brandywine to Miracles of Science (2002).

Linz, Maggie, The Du Ponts: Houses and Gardens in the Brandywine (2009).