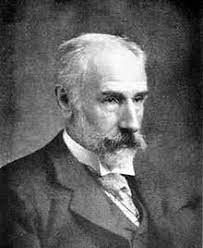 Francis Ysidro Edgeworth (1845–1926) was born in Edgeworthstown, in County Longford, Ireland, into the so-called “Anglo-Irish” (i.e., Protestant English) landed aristocracy, which ruled Ireland at the time.

Edgeworth’s father’s family was of French Huguenot extraction, while his mother was born in Spain. She was living in England as a war refugee, when she met his father on the steps of the British Museum.

As the name of his birthplace implies, Edgeworth’s family owned the region surrounding the ancestral manor where he was born and raised. He was educated at home by private tutors until he was of college age.

Edgeworth initially attended Trinity College Dublin, which was then an Anglican institution. (Although Catholics had been allowed admission since 1793, their numbers remained small until after the establishment of the Irish Free State in 1922.)

In 1865, Edgeworth took his bachelor’s degree in classics from Trinity. He then studied classics and modern languages at Oxford University’s Balliol College, but never took a higher degree.

Edgeworth qualified as a barrister (a lawyer who argues cases in court) in London in 1877, but never practiced his profession.

Edgeworth was an autodidact in mathematics and economics, but though he studied these subjects on his own after leaving college, he was so successful that he began publishing papers on economics in professional journals beginning in the early 1880s.

On the strength of his publications, Edgeworth was appointed a professor in economics at King’s College London in 1888.

In 1891, Edgeworth moved to Oxford University, where he held the title of Drummond Professor in Political Economy. He was also elected a Fellow of All Souls College, where he remained until retiring with emeritus status in 1922.

A lifelong bachelor, Edgeworth lived throughout his life mostly in his rooms at Oxford, though for many years he also maintained a second residence in London.

In 1911, Edgeworth inherited the family estate in Ireland.

Edgeworth was influential (along with his friend, William Stanley Jevons, and Alfred Marshall) in the transition from classical to neo-classical economics. Building upon work by Léon Walras, Vilfredo Pareto, and others, he developed modern formal analytical techniques in order to model individual decision-making in an economic context.

Edgeworth also applied his work in statistics and probability theory to the foundations of utility theory, within the context of utilitarianism—which he believed formed the basis for all human action, and so in the economic sphere, as well. In so doing, he e Hintroduced the concepts of the indifference curve and the “Edgeworth box,” which are still widely taught in modern microeconomics classes.

Edgeworth’s principal ideas were advanced in a relatively small number of essays published during the 1880s (see “Selected Works by Edgeworth” below), which were collected into a three-volume set entitled Papers Relating to Political Economy, which were published in 1925, the year before his death.

Otherwise, Edgeworth’s reputation as an economist largely rests on his monograph, Mathematical Psychics, published in 1881. In this work, he introduced a type of indifference curve known as a “contract curve.” This idea formed the basis for work by the Nobel laureate Gérard Debreu (with Herbert Scarf) in 1963 (see “Selected Works About Edgeworth” below).

Perhaps the most-influential concept Edgeworth advanced in Mathematical Psychics was the idea that general equilibrium may be characterized as an optimal set of feasible exchanges which cannot be improved upon by any subset of agents. These became known as the economic “core,” or as “Edgeworth allocations.”

Edgeworth then posited the conjecture that increasing the number of economic agents to infinity will cause the economic core to shrink to the set of Walrasian equilibrium states.

Separately, Edgeworth’s theory of barter provided a basis for later research on dynamic adjustments to the economy, as discussed by Hirofumi Uzawa in his 1962 paper cited below.

Mathematical Psychics: An Essay on the Application of Mathematics to the Moral Sciences (1881).

Metretike: Or the Method of Measuring Probability and Utility (out of print) (1887).

Bonner, John, Economic Efficiency and Social Justice : The Development of Utilitarian Ideas in Economics from Bentham to Edgeworth (1995).

Creedy, John, Edgeworth and the Development of Neoclassical Economics (1986).