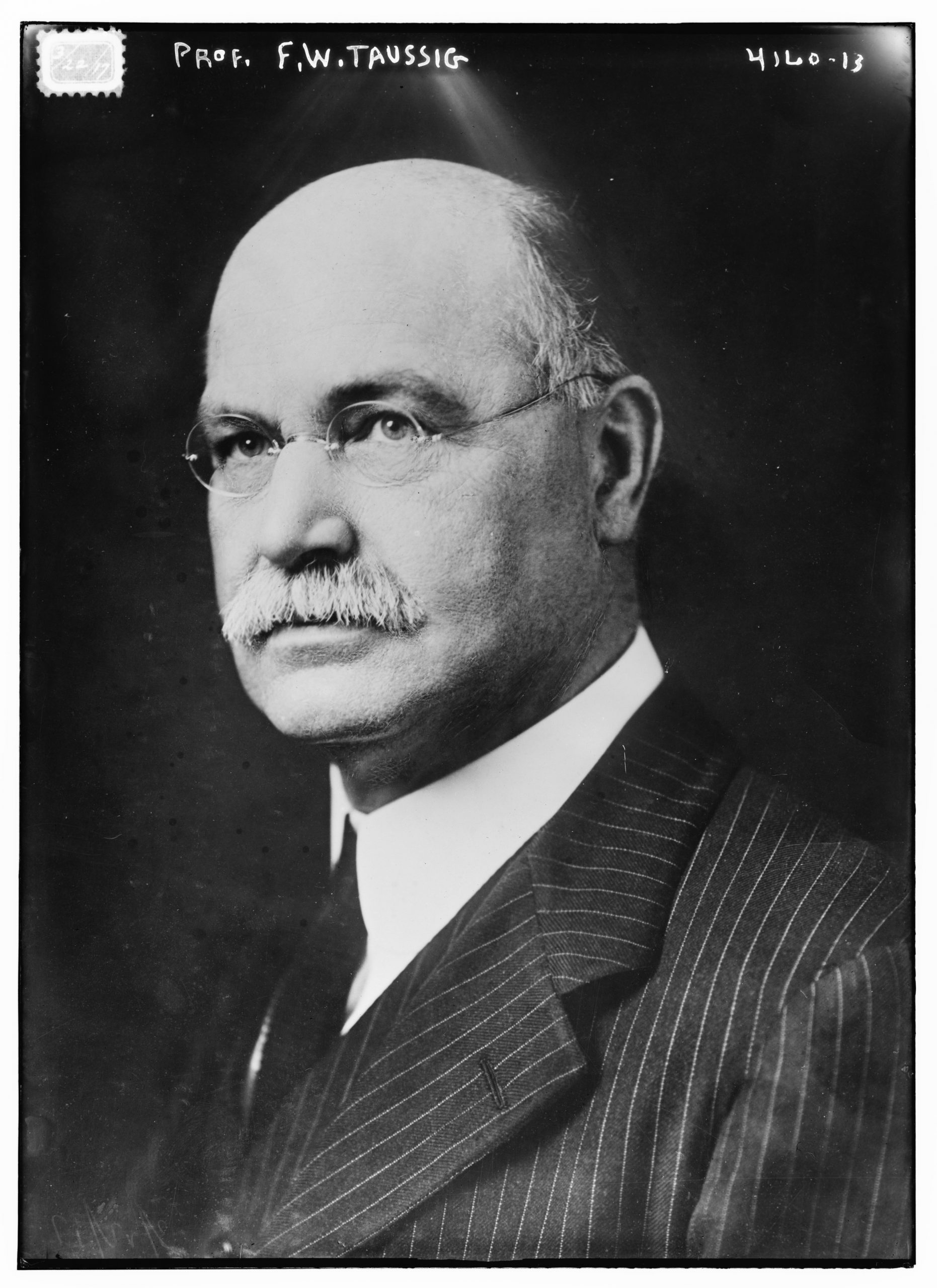 Taussig’s father was a physician and businessman, who was involved in the construction of the Eads Bridge connecting St. Louis with East St. Louis, Illinois, which was completed in 1874. The Eads Bridge, which still stands, was the first to be built across the Mississippi River south of its confluence with the Missouri River.

Taussig’s parents encouraged his early literary and musical interests. The boy learned to play the violin at an early age.

Taussig received his bachelor’s degree from Harvard in 1879. He then spent a year in Europe, where he studied economics the University of Berlin.

Upon returning to the US, Taussig reentered Harvard, where he studied for a law degree. During his graduate studies, he served as a secretary to Harvard President Charles W. Eliot for several years.

In 1886, Taussig received his law degree from Harvard.

Immediately upon graduation, Taussig was offered a position as assistant professor of economics at Harvard. In 1892, he was promoted to full professor.

Apart from a few years devoted to government service and to traveling in Europe for health reasons, Taussig spent his entire career at Harvard.

Over his years at Harvard, Taussig taught many students who went on to have distinguished careers, perhaps most notably, Jacob Viner.

Taussig was deeply involved with activities designed to bolster the professional status of the young discipline of economics. For example, Taussig was editor of the Quarterly Journal of Economics from 1889 until 1890 and again from 1896 until 1935.

Moreover, Taussig was elected president of the American Economic Association twice, in 1904 and in 1905, and served as chair of the United States Tariff Commission during World War I, between 1917 and 1919.

In addition to his professional activities as an economist, Taussig was a vocal advocate of eugenics, a now-discredited belief system inspired by Charles Darwin’s theory of natural selection, which was widespread in American academia at the time.

Taussig was an important conduit of neo-Classical economic ideas from England to the US during the last two decades of the nineteenth century and the early years of the twentieth century.

Taussig was sometimes referred to as the “American Marshall.” However, he earned this sobriquet not just for his advocacy of Alfred Marshall’s actual doctrines, but also for the central role that he played in the establishment of economics as a professional discipline in the US, which was analogous to the role that Marshall played in the UK.

In addition to Taussig’s professional activities already mentioned above, his 1911 textbook, Principles of Economics, reprinted in 1915 and 1927, was one of the principal conduits of this influence.

On the other hand, Taussig was not a dogmatic follower of Marshall or anyone else. Indeed, he opposed placing inordinate stress on the “Marginalist Revolution,” emphasizing instead the continuity between Classical and neo-Classical economics. An example of this was his effort in 1896 to resurrect the forgotten “wages-fund” doctrine.

Taussig generally accepted the principles of Austrian economics, especially the theory of capital of Eugen von Böhm-Bawerk. However, he took a dim view in general of economic theorizing conducted at a high level of abstraction, such as Marginalism and the American version of Institutionalism.

Taussig’s own main contribution to economics was in the area of international trade. More specifically, he was considered an authority on the issue of tariffs.

While Taussig’s support for free trade was decidedly qualified, he was considered quite conservative in other ways, such as his suspicion of labor unions and of silver coinage.

Protection to Young Industries as Applied to the United States: A Study in Economic History (1883).

The Tariff History of the United States: A Series of Essays (1888).

The Silver Situation in the United States (1892).

“Results of Recent Investigations on Prices in the United States,” Publications of the American Statistical Association, 3: 487–491 (1893).

Wages and Capital: An Examination of the Wages Fund Doctrine (1896).

Inventors and Money Makers; Lectures on Some Relations Between Economics and Psychology (1915).

“The Financial Situation: A General Survey,” Annals of the American Academy of Political and Social Science, 75: 1–11 (1918).

“The Present and Future of the International Trade of the United States,” Quarterly Journal of Economics, 34: 1–21 (1919).

“The Present and Future of the International Trade of the United States,” Quarterly Journal of Economics, 34: 1–21 (1919).