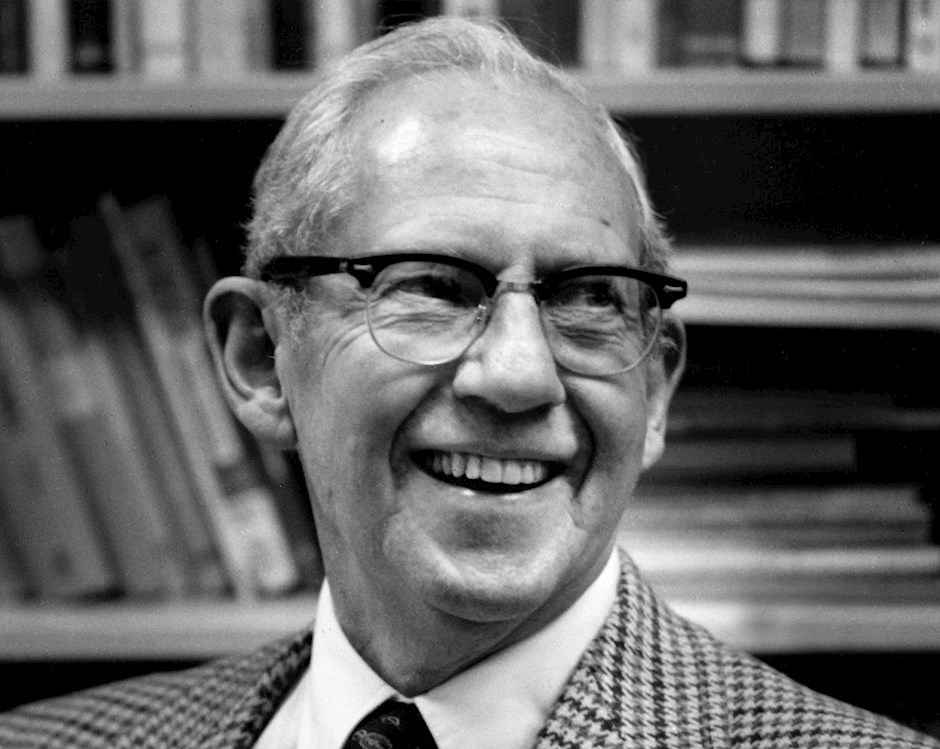 George J. Stigler (1911–1991) was born in Renton, Washington, a suburb of Seattle. Both of his parents had immigrated to the US from German-speaking lands. Stigler himself spoke German in the home before he learned English.

Stigler’s father was a brewer by profession, who was driven underground by Prohibition. For this reason, Sigler’s childhood was somewhat precarious financially.

In 1931, Stigler received his bachelor’s degree from the University of Washington in Seattle.

Stigler then attended Northwestern University, in Evanston, Illinois, just north of Chicago, where he received an MBA in 1932.

While at Northwestern studying business, Stigler developed a strong interest in economics. He decided to apply to the University of Chicago’s doctoral program in economics, which was already flourishing under the leadership of Frank H. Knight.

Stigler was accepted by Chicago and obtained his PhD in economics there in 1938. He wrote his doctoral dissertation under the supervision of Knight.

During World War II, Knight worked for the US government at Columbia University, doing research of a mathematical and statistical nature for the Manhattan Project.

After the war, Knight taught at Brown University for a year, before returning to Columbia, this time as a faculty member. He taught economics at Columbia from 1947 until 1958.

In 1958, Stigler returned to his alma mater, the University of Chicago, where he taught until his retirement.

Stigler was a member in good standing of the Chicago school of economics, which means, of course, that he was a supporter of free markets.

Stigler made several specific contributions to free-market ideas. Probably the best known of these is the “economic theory of regulation,” perhaps better known by its popular label “regulatory capture.”

Regulatory capture occurs when an interest group co-opts the administrative state bureaucracy that is charged with its oversight in such a way that the interest group essentially takes over the reins of government power to shape laws and regulations to its own liking.

This side of the Chicago school’s work has become known as the “Chicago school of political economy.” It has obvious affinities with the viewpoint of the Virginia School of James M. Buchanan.

Another important contribution by Stigler—introduced in an important article published in 1961 (see below)—was his theory of the economic consequences of the information-status of economic actors. In a nutshell, he showed how information ought to be incorporated into economic calculation as a valuable resource.

The following year, Stigler published another paper extending the general theory of information economics to the particular case of the labor market (see below). This work became known as the “theory of search unemployment.”

Stigler was awarded the 1982 Nobel Memorial Prize in Economics Sciences. His Nobel Lecture, “The Process and Progress of Economics,” was published the following year in the Journal of Political Economy (see below).

Trends in the Service Industries (1956).

Capital and Rates of Return in Manufacturing Industries(1963).

The Intellectual and the Marketplace, and Other Essays (1964).

Essays in the History of Economics(1965).

The Behavior of Industrial Prices (1970).

The Citizen and the State: Essays on Regulation (1975).

The Economist as Preacher, and Other Essays (1982).

Memoirs of an Unregulated Economist (1985).

The Essence of Stigler, edited by Kurt R. Leube and Thomas Gale Moore (1986).

Five Lectures on Economic Problems: Five Lectures Delivered at the London School of Economics and Political Science on the Invitation of the Senate of the University of London (delivered 1949) (2021).

Selected Books about the Chicago School of Political Economy

Leeson, Robert, The Eclipse of Keynesianism: The Political Economy of the Chicago Counter-Revolution (2002).

Palda, Filip, A Better Kind of Violence: The Chicago School of Political Economy, Public Choice, and the Quest for an Ultimate Theory of Power (2016).