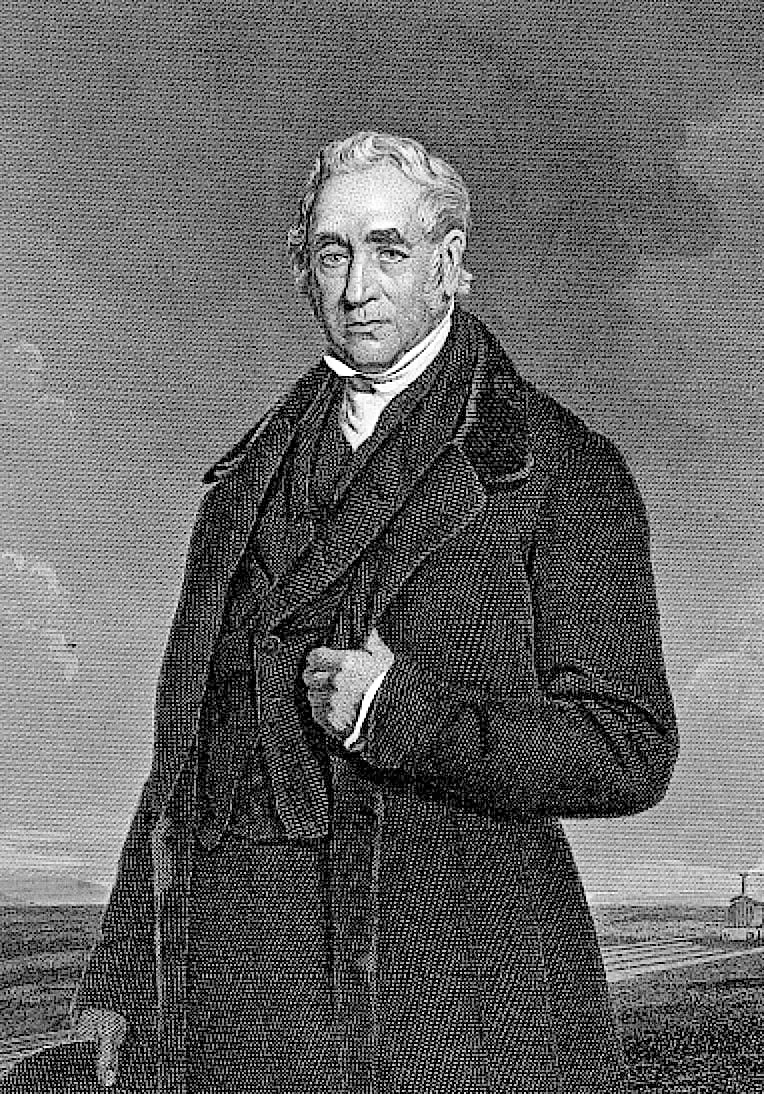 George Stephenson (1781–1848) was born in Wylam, Northumberland, England, a stone’s throw from Newcastle upon Tyne. His father, who could not read or write, worked as a fireman for a local colliery.

The family had no money to pay for the young Stephenson’s education, so the boy followed his father into a nearby coal mine as a teenager.

However, Stephenson had a strong desire to improve his lot in life and effectively taught himself to read, write, and do arithmetic at the age of 18 by studying at night.

In 1801, Stephenson began working in a different collier, this time in the more-responsible position of “brakesman,” that is, as the operator of the winding mechanism for the mine’s underground railway system.

After marrying, Stephenson continued to work as a brakesman at various collieries around Northumberland. He began working as a cobbler and clock repairman in his spare time to supplement his income.

In 1806, Stephenson’s wife died, leaving him with a three-year-old son. Not long afterwards, his father was blinded in a mining accident.

For the next five years, Stephenson lived with his disabled father and small son, while continuing to work as a brakesman at various collieries around Northumberland.

Finally, in 1811, the young widower caught a break. At a colliery where Stephenson was working in the town of Killingworth, north of Newcastle, a pumping engine happened to break down on his shift. He offered to fix the machine himself, which he managed to do successfully.

As a result, Stephenson was promoted to the position of enginewright—the person responsible for all the steam-driven machinery employed by the colliery.

In this way, Stephenson became a technical expert in the maintenance and repair of steam engines.

Encouraged by his recent successes, Stephenson began toying with other ideas for improvements to mine technology.

In 1815, Stephenson devised an improved type of safety lamp for miners, which would be proof against setting off explosions. He demonstrated his safety lamp to several other men at an underground fissure through which methane was seeping.

Almost at the same time, the famous scientist Humphrey Davy presented a lamp built on similar principles to the Royal Society of London, which awarded him a £2000 prize for his work.

When Stephenson heard of Davy’s invention, he applied to have his own safety lamp considered by the Royal Society. That august body could not believe that an uneducated man could have made such an invention on his own, and therefore ruled that Stephenson must have stolen his lamp’s design from Davy.

Meanwhile, a local Northumberland committee that looked into the matter exonerated Stephenson and awarded him £1000. Years later, the British House of Commons opened another investigation into the origin of the safety lamp, concluding that Stephenson had worked in ignorance of Davy’s efforts. However, Davy himself remained intransigent, continuing until the end of his life to consider Stephenson a thief.

Stephenson felt that Davy’s and the Royal Society’s prejudice against him was largely due to his strong north-country accent. For this reason, he saw to it that his son, Robert Stephenson, received a private education in which he was taught to speak with the “received pronunciation.” This would prove to be a wise move later in Stephenson’s career, when Robert’s ability to move with ease in the highest social circles became invaluable to the Stephenson family’s business pursuits.

The Scottish inventor James Watt had invented a much-improved steam engine in 1776, which would spark the Industrial Revolution.

By the 1810s, the main application of Watt’s invention had been to automate looms and other machinery for the manufacture of textiles. However, many people were attempting to apply it to other uses, for example, Robert Fulton, whose first financially viable steamboat had been launched in 1807.

Stephenson was not the first person to wed the steam engine with a wheeled conveyance. That honor goes to Richard Trevithick, who in late 1801 constructed the firststeam-powered wagon—named the “Puffing Devil” —designed to run on tires on an ordinary paved road. The following year, he adapted the Puffing Devil to run on stationary rails.

In 1803, one of Trevithick’s stationary pumping engines in Greenwich exploded, killing four bystanders. The inventor responded to this tragedy by installing a safety valve on his engines. Later the same year, he successfully demonstrated a steam-driven carriage in London.

Nevertheless, the main use to which Trevithick’s steam-powered vehicles were put was for work in collieries. Coal mines had long been equipped with “wagonways”—tracks for the human-powered transportation of wagons loaded with heavy equipment and coal into and out of the mines. Trevithick’s colliery locomotives were designed to run on these pre-existing tracks.

Trevithick worked tirelessly to adapt and improve his inventions for the next several years. Then, in 1811, he left for Peru, where he introduced his invention to the silver mines there. He returned to South America several times for long stays during the next dozen or so years.

Such was the state of the art in the budding locomotive industry when Stephenson created his first design in 1814. Like Trevithick’s colliery locomotives, Stephenson’s first entry in the field was designed for service in the coal mine at Killingworth.

However, Stephenson made an important innovation: namely, the equipped his colliery locomotive with a “flanged-wheel adhesion” systems, meaning that flanges on the locomotive’s wheels made contact with corresponding flanges on the rail itself, providing improved traction, stability, and safety.

Earlier, collier wagonways were mostly made of wood, but Stephenson’s flanged-wheel adhesion system required wrought-iron rails, which helped to provide his locomotives with a distinct competitive advantage.

Over the next decade or so, Stephenson received many commissions to build similar collier locomotive-and-railway systems all across the north of England. Gradually, he began to build railroads beyond the confines of collieries, as well.

For example, in 1821, Stephenson built a 25-mile railroad connecting collieries in the cities of Stockton and Darlington. In 1830, he built a 30-mile track between Liverpool and Manchester, the first railway link between two cities, as opposed to serving collieries.

By 1845, Stephenson, as well as others, had built railway lines connecting most of the major cities in the UK.

Another innovation introduced by Stephenson, which helped to make his locomotives preeminent in the field, was the construction of absolutely level railway beds wherever possible.

The need to do this had been established beyond the shadow of a doubt by experiments that Stephenson had personally supervised, which showed that even an extremely small gradient—as small as 1 in 260—could consume up to half the power of the locomotive, as compared to a completely level gradient.

During the 1830s, Stephenson acquired a worldwide reputation. For example, the men who built the first railroads in North America descended upon Stephenson’s home in Alton Grange, in Leicestershire, to negotiate with him to purchase his equipment and ship it back home, or else to obtain a license to build his equipment themselves.

In addition to the great success of his locomotive enterprise, Stephenson also profited handsomely from a series of coal mines that he began to purchase.

Upon his death, Stephenson’s net worth was estimated to be upward of £5 million.

More importantly, it is in no small part thanks to Stephenson’s massive development of his country’s railway system that the UK led the world in the area of transportation—of both raw materials and manufactured goods—in the early nineteenth century, thereby helping to place it at the forefront of the Industrial Revolution.

Selected Books About Stephenson and the Railway

Davies, Hunter, George Stephenson: The Remarkable Life of the Founder of the Railways (1975).

Focke, Leonora, The Story of George Stephenson: From the Humblest of Origins to His Final Days (2022).

Layson, John F., George Stephenson, The Locomotive and the Railway (1881).

Ross, David, George and Robert Stephenson: A Passion for Success (2010).

Smiles, Samuel, Lives of the Engineers. The Locomotive, George and Robert Stephenson (1862).

Summerside, Thomas, Anecdotes, Reminiscences, and Conversations, Of and With the Late George Stephenson, Father of Railways (1878).