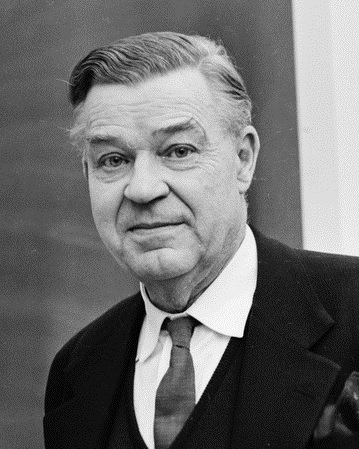 Gunnar Myrdal (1898–1987) was born Karl Gunnar Pettersson in the small town of Skattungbyn, Sweden, on the outer edge of settled portion of the country almost 200 miles northwest of Stockholm. His father was a building contractor.

At the age of 16, Myrdal dropped his first name and changed his surname from Pettersson to the distinctive Myrdal, after the name of his family’s farm.

For his undergraduate studies, Myrdal attended Stockholm University, where he studied the law. He received his law degree in 1923, then went on to study economics at the graduate level.

Myrdal obtained his PhD in economics from Stockholm University in 1927.

Myrdal’s doctoral dissertation was entitled (in English translation), The Problem of Price Formation under Economic Change. In this work, he developed mathematical models of the equilibrium state of price formation, given ongoing changes in various factors affecting the economy (“dynamic conditions”).

Myrdal’s dissertation was published in Swedish in 1927.

Even before receiving his PhD, Myrdal received a Rockefeller Foundation traveling fellowship to study economics abroad. Between 1925 and 1930, he attended classes and did independent research in the UK, in Germany, and in the US.

Myrdal’s first English-language book, The Political Element in the Development of Economic Theory, appeared in 1930 (see “Selected Works Authored or Co-authored by Myrdal” below). The book, which was based on a series of lectures he was invited to deliver at Stockholm University, was the first of many volumes he published in English over the course of a long and prolific career.

In 1933, Myrdal was appointed a professor of political economy at Stockholm University [Stockholms Högskola], a post he occupied until 1947.

In 1933, Myrdal was also elected as a member of the Swedish Parliament representing the Swedish Social Democratic Party. His political career also included a two-year stint, from 1945 until 1947, as Trade Minister under a Social Democratic government. However, he was forced out of office in 1947 as a result of a monetary crisis that was widely blamed on his policy recommendations.

The following year, Myrdal co-wrote with his wife, Alva Myrdal, a Swedish-language work on the declining Swedish birth rate, which had a direct impact on government support payments to encourage increased family formation and childbearing.

In 1938, Myrdal was hired by the Carnegie Corporation to undertake a comprehensive and multi-faceted study of the sociological, economic, legal, and other phenomena affecting the lives of African Americans in the US, and of so-called “race relations” in the US, more generally. The result was the landmark, two-volume publication in 1944 of An American Dilemma (see below), for which Myrdal remains best known to the general educated public beyond the walls of academia. The future diplomat and Nobel Peace Prize laureate Ralph Bunche worked as Myrdal’s principal research assistant on the project.

An American Dilemma made an enormous impact at the time, becoming a highly controversial bestseller, requiring 25 print runs with a total of more than 100,000 copies in print. The book was even cited in the Brown v. Board of Education decision by the US Supreme Court in 1954, which overturned the “separate but equal” doctrine of racial segregation in America’s public schools.

In 1947, upon the creation of the United Nations in the wake of World War II, Myrdal was appointed he Executive Secretary of the UN Economic Commission for Europe. He held this position for the next ten years.

In 1960, Myrdal returned to Stockholm University, this time as a professor of international economy. He was to remain there for the rest of his career, attaining emeritus status in 1967.

During this period, Myrdal began to widen his economic research to include issues of development economics, especially in Asia. To this end, he traveled extensively in the Third World.

Myrdal spent the 1974–1975 academic year as a visiting professor at New York University.

In 1974, Myrdal shared with Friedrich A. Hayek the Nobel Memorial Prize in Economic Sciences.

Myrdal’s importance to the history of economics lies in his contributions to the theory of international relations and development economics. His Nobel Prize citation mentioned his “penetrating analysis of the interdependence of economic, social and institutional phenomena.”

In his early work, beginning with his dissertation, Myrdal built on the theory of the cumulative process of price formation and endogenous money pioneered by his fellow Swede, Knut Wicksell. He also further developed the work of Frank H. Knight on the role of uncertainty in the economic process.

In lectures at Stockholm University published in 1939 as Monetary Equilibrium, Myrdal articulated the distinction between ex ante (that is, planned) and ex post (realized) expectations regarding savings and investment.

Although Myrdal had always been interested in the influence of institutional factors on the economy, in this early work he mostly pursued the accepted methodology of his field at the time, which consisted in constructing abstract formal models of economic relations.

Then, in the late 1930s, Myrdal changed gears. His landmark study for the Carnegie Foundation, An American Dilemma, published in 1944, was a pioneering investigation in sociology. From then on, his career was marked by a unique blending of sociological and economic reasoning.

In 1968, Myrdal published a massive, three-volume study of a number of Asian nations—based on similar, economically informed, sociological principles—entitled Asian Drama: An Inquiry into the Poverty of Nations.

Myrdal was at the opposite end of the political spectrum from Hayek. The fact that they were chosen to share the 1994 Nobel Prize raised eyebrows at the time, suggesting behind-the-scenes political maneuvering among the selection committee members.

The Political Element in the Development of Economic Theory (1930).

Kris i befolkningsfrågan [Crisis in the Population Question], with Alva Myrdal (1934).

Realities and Illusions in Regard to Inter-Governmental Organizations (out of print) (1955).

An International Economy: Problems and Prospects (1956).

Rich Lands and Poor: The Road to World Prosperity (1957).

Economic Nationalism and Internationalism (out of print) (1957).

Value in Social Theory: A Selection of Essays on Methodology (1958).

Asian Drama: An Inquiry into the Poverty of Nations (three volumes) (1968).

The Challenge of World Poverty: A World Anti-Poverty Program in Outline (1970).

Against the Stream: Critical Essays on Economics (1973).

Angresano, James, The Political Economy of Gunnar Myrdal: An Institutional Basis for the Transformation Problem (1997).

Carlson, Allan C., The Swedish Experiment in Family Politics: The Myrdals and the Interwar Population Crisis (1990).

Dostaler, Gilles, Diane Ethier, and Laurent Lepage, eds., Gunnar Myrdal and His Works (out of print) (1992).

Lyman, Stanford M., “Gunnar Myrdal’s An American Dilemma After a Half Century: Critics and Anticritics,” International Journal of Politics, Culture and Society, 12: 327–389 (1998).

Pulliam, John, “A Description and Analysis of Myrdal’s Theory of Social Change Including the Role of Education,” Journal of Thought, 1: 33–42 (1966).