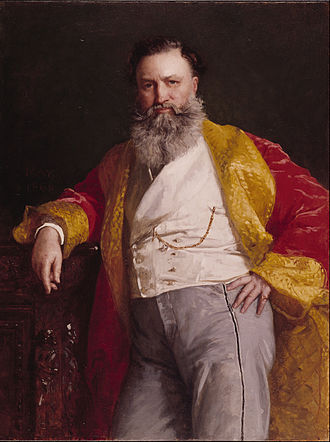 Isaac Merritt Singer (1811–1875) was born in Schaghticoke, New York, a hamlet adjacent to Pittstown, a small town about 20 miles northeast of Albany, not far from the Vermont border.

Singer’s father was an immigrant from Germany. His surname was originally Reisinger, which he anglicized to Singer upon arrival in the US.

The young Singer’s parents divorced when the boy was 10 years old. A little later, to all intents and purposes his mother abandoned the boy, who was left to shift for himself at the age of 12 or so.

After working briefly as a joiner and a lathe operator, Singer joined a group of traveling players and went on the road with them.

Several years later, in 1830, Singer became apprenticed to a machinist.

Over the next few years, Singer invented several modifications to various types of machines. For example, in 1839, he patented a rock-drilling machine, which he sold for $2,000 to the Illinois & Michigan Canal Building Company.

With the money from his patent, Singer decided to return to show business, founding his own traveling group of actors called the “Merritt Players.” He toured with this group for the next four years.

After this adventure, Singer returned to working as a machinist. At the same time, he began to toy with mechanical inventions once again. For example, in 1849, he built a metal- and wood-carving machine.

That same year, Singer moved to New York City to raise money to fund his carving machine. While there, he met G.B. Zieber, who became his financial backer and partner. After an explosion in the New York City machine shop where Singer was then working, Ziegler suggested he take his invention to Boston, where he demonstrated the carving machine at a machine shop run by Orson C. Phelps.

During Singer’s stay in Boston, Phelps asked him to take a look at some sewing machines—of a make that had been patented two years before, in 1849—that had been brought to Phelps’s shop for repair. The year was 1851.

While many ideas for aspects of the sewing machine had been patented before this, beginning in the middle of the eighteenth century in both England and Germany, none of these early ideas was ever successfully developed into a commercially viable product.

One of the first sewing machines to be built and used commercially was developed in France by Barthélemy Thimonnier, in the revolutionary year of 1830.

Thimonnier actually built a factory and began producing his sewing machines en masse. However, the factory was burned to the ground by rioting tailors who were outraged by the competition afforded by the machines.

Thimonnier’s machines also had two major design flaws. First, they were made of wood; second, the stitching motions of their needles were patterned on the hand motions of human sewers.

In 1833, the American inventor Walter Hunt invented a machine that abandoned the attempt to emulate the motion of the human had in sewing. His machines created a lockstitch using the type of eye-pointed needle with two spools of thread that is still in use today. However, the machine was limited—it could only produce short, straight seams—and did not prove financially successful.

Finally, in 1844, the American inventor Elias Howe took over Hunt’s lockstitch concept, adapting it by adding an automatic feed, by moving the eye of the needle to its point, and by causing the needle to pass completely through the cloth, with a shuttle installed underneath to form the lockstitch.

In 1846, Howe was awarded a patent for his design. However, he had difficulty in raising capital to begin mass production, which allowed competitors to steal a march upon him. Chief among these was to be Singer.

First, however, came yet another sewing machine, patented in 1849 by a firm known as J. Lerow & S. Blodgett, of Worcester, Massachusetts. This machine, which was essentially a copy of Howe’s, was the one that Phelps asked Singer to examine in his workshop in Boston in 1851, as mentioned above.

This fortunate occurrence gave Singer the opportunity to study Howe’s design—which, recall, was in part based on Hunt’s—in close detail.

Singer immediately set about improving upon Howe’s sewing machine. The design he came up with possessed several important advances, including a shuttle moving in a straight line (rather than in a circle), a straight needle (rather than a curved needle) moving in a curved path, continuous operation, and an overhanging arm holding the needle bar above the sewing table.

The latter innovation provided access to any part of the cloth or garment being sewn, without requiring any reconfiguring of the machine.

The combination of design features incorporated by Singer into his new sewing machine included almost all of those that are still in use to this day.

Singer patented these innovations in 1851 and founded a company, I.M. Singer & Co., to support the mass manufacture of his new sewing machine.

Production was held up, however, by a flurry of lawsuits against his company—and by his company against others—over the question of priority and patent infringement.

The details of the legal tangle that followed are far too complex to go into here. In essence, though, after several years, the courts found that Howe’s patent-infringement suit against Singer was invalid due to Howe’s own infringement of the patent previously filed by Hunt (with whom Singer had meanwhile joined forces).

By 1856, the legal landscape had been cleared and Singer began to produce his sewing machine at scale. The first year, the company produced over 2500 machines. Four years later, in 1860, he opened a second factory in New York City, which produced 13,000 units in its first year of operation.

Singer also introduced customer service innovations such as purchasing on the installment plan and the acceptance of trade-ins. Accordingly, the sales of Singer’s machines soared.

Not only were they affordable, but Singer sewing machines were perceived by the public as clearly superior in quality.

For this reason, at the time of Singer’s death in 1875, his company was beginning to expand into Europe.

Today, many economic historians point to I.M. Singer & Co. as one of the first international conglomerates in the world.

Selected Books About Singer and the Sewing Machine

Askaroff, Alex, A Brief History of the Sewing Machine: Without the Boring Bits (2019).

Askaroff, Alex, The Rise and Fall of Singer Manufacturing in Britain (2019).

Brandon, Ruth, Singer and the Sewing Machine: A Capitalist Romance (1977).

Hunter, Claire, Threads of Life: A History of the World Through the Eye of a Needle (2019).

Scott, John, Genius Rewarded; or The Story of the Sewing Machine (1880).