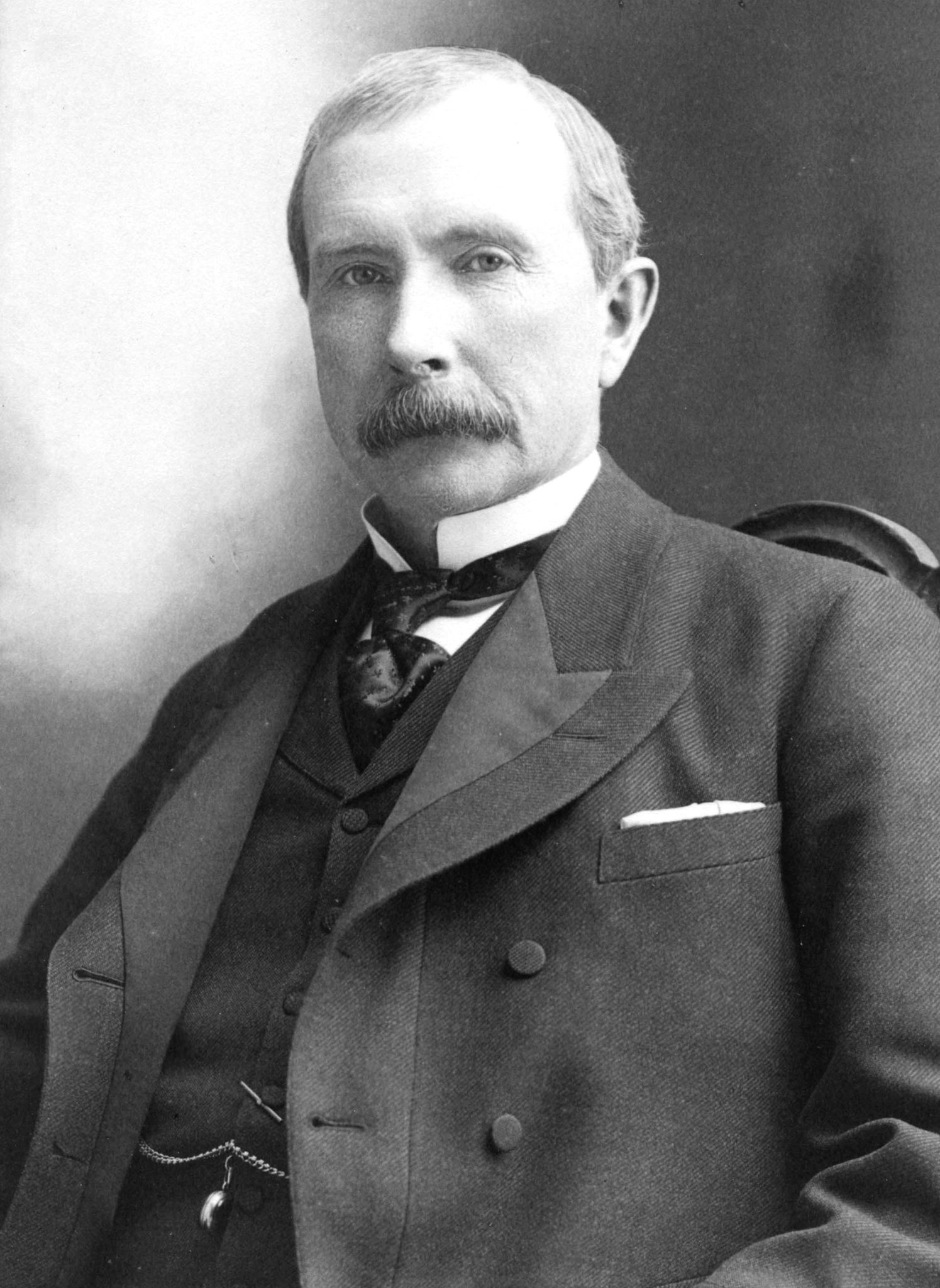 John Davison Rockefeller, Sr. (1839–1937), was born in Richford, a village in between the towns of Ithaca and Binghamton in upstate New York.

Rockefeller’s father began life as a lumberman, but later took to the road as a traveling “medicine show” huckster, also known as a “snake oil salesman.” In addition, the father led an irregular private life, presenting Rockefeller with two half-sisters born out of wedlock. He later “married” his mistress, trading adultery for bigamy.

Rockefeller’s father’s long absences from home saddled the boy with household responsibilities beyond his years. In later life, Rockefeller always credited his mother for counteracting his father’s baleful influence.

Rockefeller’s family relocated several times while he was growing up, moving first from Richford to Moravia, New York, north of Ithaca, and subsequently, in 1851, from Moravia to Owego, west of Binghamton.

In Owego, Rockefeller was able to attend a private academy for two years.

In 1853, the family relocated once again, this time to Strongsville, Ohio, about 20 miles south of Cleveland.

In 1855, Rockefeller left Central High and took a ten-week course in business at Folsom’s Mercantile College, which had been founded in Cleveland just seven years before, in 1848.

Folsom’s was in existence, with many name changes, for 165 years. Its last incarnation was as Chancellor University, which closed its doors for good in 2013.

Later in 1855, at the age of 16, Rockefeller obtained his first full-time paying job—as a bookkeeper for a commission-merchant and produce-shipping firm based in Cleveland.

Rockefeller performed very well in his first job. At first, he was assigned such routine tasks as calculating transportation costs; however, his employers soon gave the boy the authority to negotiate prices directly with freight agents, ship’s captains, and canal-barge owners. Eventually, he was even entrusted with debt collection duties.

In 1859, Rockefeller and a friend set up their own commission-merchant business. With the advent of the American Civil War two years later, the business flourished beyond the young partners’ dreams.

During the war, a new business opportunity presented itself to Rockefeller. Up to this point, whale oil had been the chief fuel used for lighting lanterns in private and public spaces. However, the price of whale oil was continuing to rise.

It was already known that “rock oil” (petroleum) could be refined into kerosene, which made an excellent fuel for lamps. However, rock oil itself was relatively rare and the price accordingly high.

Then, in 1859, oil reserves was discovered in Titusville in northwestern Pennsylvania, setting off an “oil rush” as dozens of wildcat companies were formed overnight to take advantage of the new, much cheaper fuel source.

Finally, during the War, the Union government provided subsidies. which brought the price of oil down still further—eventually leading to a temporary glut.

Rockefeller and his partner, recognizing a good business opportunity when they saw one, switched from supplying foodstuffs to the government to investing in the budding oil industry.

Rockefeller built his first oil refinery in 1863 in the industrial section of Cleveland known as “The Flats,” just behind the downtown area.

Rockefeller’s refinery was not only timely, it was also highly innovative. Other refineries of the day typically rendered about 60% of the original crude oil into kerosene, dumping the remaining 40% left over from the kerosene refinement process into the river.

Rockefeller, however, continued to refine the remaining 40% of the original crude oil into additional valuable products, such as gasoline, lubricating oil, paraffin wax, petroleum jelly, tar, naphtha, and others.

After the close of the Civil War, the US experienced a strong economic expansion, fueled by the Homestead Act of 1862 and the subsequent western settlement, the construction of railroads, and the rapid industrialization of the economy across the board.

Oil would prove to be the product that literally fueled and lubricated much of this feverish economic activity.

In 1865, Rockefeller, together with several new partners, set up his first oil company. This company expanded rapidly, going through several incarnations and ultimately being rebaptized as Standard Oil in 1870.

Rockefeller continued to pursue his business interests aggressively, buying competitors and integrating them into his own concerns.

By 1880, Standard Oil—while not technically a monopoly—controlled approximately 90% of the US oil business.

In 1882, Rockefeller’s lawyers created a new and innovative financial structure for Rockefeller’s extensive holdings, which they called the Standard Oil Trust. Rockefeller’s trust proved to be highly controversial and eventually gave rise to strong political opposition.

In the late nineteenth many politicians adopted the cause of “trust-busting.” The best known of these was undoubtedly the future US President, Theodore Roosevelt. As a result, in 1890 a federal law was passed, the Sherman Antitrust Act, providing a legal basis for the prosecution and dismantling of monopolies.

In 1904, the “muckraking” journalist Ida Tarbell wrote The History of the Standard Oil Company (see below), which depicted Rockefeller as the worst of the “Robber Barons.” Her book played a catalytic role in persuading the public to support the progressive candidates who wanted to rein in America’s industrial behemoths during the early decades of the twentieth century.

In 1911, the US Supreme Court found Standard Oil in violation of the Sherman Act. Rockefeller’s company was accordingly broken up into 34 smaller companies, including the forerunners to such contemporary household names as Conoco, Chevron, ExxonMobil, Sohio, and Pennzoil.

In 1914, Rockefeller’s reputation was further besmirched by the “Ludlow Massacre”—a struggle between the United Mine Workers and private security forces hired by Rockefeller in order to break a strike at a coal mine he owned in Ludlow, Colorado.

Estimates of the loss of life during the confrontation vary widely, with 70 considered to be the minimum likely number.

Throughout his life, Rockefeller had been involved in philanthropic activity. Among his most-famous donations are the endowment for Rockefeller University in New York City and for what is now Rockefeller Memorial Chapel on the campus of the University of Chicago.

Upon his death in 1937, at the age of 98, Rockefeller left a fortune estimated to amount to some $1.5 billion, which would be equivalent to around $30 billion in today’s dollars.

However, when calculated as a percentage of GDP, Rockefeller’s wealth was unrivalled in American history. Indeed, Rockefeller’s fortune was about two orders of magnitude greater than that of any other American who ever lived, including that of Bill Gates.

It is entirely justified, then, to think of Rockefeller as the “richest American who ever lived.”

Random Reminiscences of Men and Events (1909).

John D. Rockefeller on Making Money: Advice and Words of Wisdom on Building and Sharing Wealth (2015).

Anderson, Nathan, John D. Rockefeller: Biography of the Richest and Most Ruthless Business Titan in History (2021).

Brown, Marcus Monroe, A Study of John D. Rockefeller: The Wealthiest Man in the World (1905).

Doran, Peter B., Breaking Rockefeller: The Incredible Story of the Ambitious Rivals Who Toppled an Oil Empire (2016).

MacGregor, J.R., John D. Rockefeller – The Original Titan: Insight and Analysis into the Life of the Richest Man in American History (2019).

Tarbell, Ida, The History of the Standard Oil Company (1904).