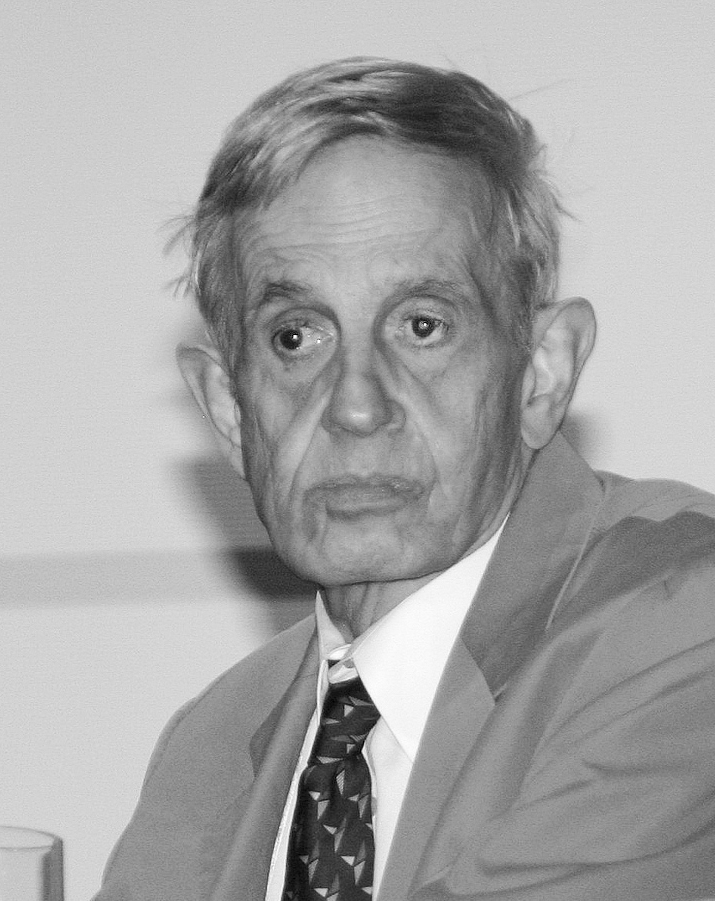 John Forbes Nash, Jr. (1928–2015), was born in the town of Bluefield, West Virginia, abutting the border with Virginia in the Appalachian Mountains at an elevation of 2611 ft.

Nash’s father was an electrical engineer who worked for the Appalachian Electric Power Company. His mother had worked as a schoolteacher before her marriage.

While Nash attended the public schools, his parents instilled in him a love of learning and respect for education. An avid reader from an early age, he began taking classes in advanced mathematics at a local community college during his senior year in high school.

Nash won a scholarship to attend the Carnegie Institute of Technology (later Carnegie-Mellon University), where he originally intended to study chemical engineering. However, under the influence of John Lighton Synge, he changed his major to mathematics.

Nash received both his bachelor’s and his master’s degrees in mathematics from Carnegie Tech in 1948, at the age of 20.

Two years later, in 1950, Nash received his PhD in mathematics from Princeton University. His doctoral dissertation, entitled “Non-Cooperative Games,” contained the seeds for the “Nash equilibrium,” which in its later and more-refined formulation represents his principal contribution to the field of economics.

Beginning in 1950, and continuing for the next four years, Nash worked as an occasional consultant for the RAND Corporation. These were the same years during which he was pursuing his seminal work on non-cooperative equilibria in game theory.

In 1951, Nash obtained his first academic post as an instructor in mathematics at the Massachusetts Institute of Technology (MIT) in Cambridge, Massachusetts. Seven years later, in 1958, he finally received a regular, tenured position at MIT.

However, soon afterwards, in 1959, Nash began to show the first signs of the severe mental illness which was to plague him for the next two decades and, in a less severe form, for the rest of his life. As a result of his declining health, he resigned from his job at MIT.

Nash spent the next decade in and out of mental hospitals. During the 1970s, his condition began to improve, and by the 1980s, he had recovered his mental health sufficiently to return to his academic work.

In 1994, Nash shared the Nobel Memorial Prize in Economic Sciences with Reinhard Selten and John Harsanyi.

In 1998, the journalist Sylvia Nasar published a book about Nash’s personal life and his struggles with mental illness. In 2001, the book, entitled A Beautiful Mind (see “Books About Nash” below), was made into a successful film directed by Ron Howard, with Russell Crowe playing the part of Nash.

Nash was first and foremost a gifted mathematician. He made significant contributions, not just to game theory, but also to the fields of partial differential equations and differential geometry.

However, for the purposes of this article, we will focus on his contribution to game theory, which is the work that influenced the discipline of economics.

Nash’s work in economics consisted of highly technical, mathematical contributions to the field of game theory. The Nobel Prize committee stated that Nash:

In addition to his early formal work on game theory, in his later years, Nash developed an interest in the broader issues of political economy, notably, the role of money.

In this late work, Nash criticized Keynesian-style government intervention in the economy on the ground that whatever the short-term benefits might be, in the long run (which John Maynard Keynes famously deprecated!), it would undermine the value of the currency.

Nash put forward the idea of an world-wide “industrial consumption price index” designed to support the creation of a system of “ideal money,” which would be more stable and would foster greater trust than the various existing monetary systems, which are subject to government manipulation.

Nash acknowledged the influence of Friedrich Hayek on this aspect of his thinking.

1. Works Authored or Co-authored by Nash

Siegfried, Tom, A Beautiful Math: John Nash, Game Theory, and the Modern Quest for a Code of Nature (2006).

Thomson, William, ed., Bargaining and the Theory of Cooperative Games: John Nash and Beyond (2010).