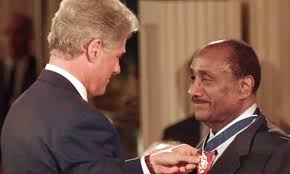 John Harold Johnson (1918–2005) was born in Arkansas City, Arkansas, today a very small town on the Mississippi River in the southeastern part of the state.

When Johnson was born, however, Arkansas City was a flourishing port city and an important local hub for steamboat and railway traffic. The town boasted several churches, three sawmills, two doctors, and even an opera house.

In 1933, when Johnson was 15 years old, his family joined the Great Migration north, settling in Chicago.

When Johnson first began attending DuSable High School—in the South Side neighborhood of Washington Park—he was mocked for his rural manners. However, he soon adapted successfully, and indeed flourished, in his new environment.

By his senior year, Johnson had been elected president of the student council, as well as editor of both the school newspaper and the class yearbook.

During this period of his life, Johnson also formed the habit of studying self-improvement books during his free time.

Johnson graduated from DuSable with honors in 1936. He applied to the University of Chicago, which offered him a scholarship to pay for his tuition expenses. However, there would have been no money for his living expenses, so Johnson felt he had to turn down the university’s offer.

Luckily, fate intervened to make it possible for Johnson to accept the scholarship and attend the university, after all. This intervention took the following form.

Thanks to his achievements in high school, Johnson was invited by the Urban League to give a speech at a dinner they held. The speech so impressed Harry Pace, an African American entrepreneur in attendance at the dinner, that he offered Johnson a part-time job with a life insurance company he headed. Pace did this explicitly to help Johnson to earn the living expenses he needed to bring college within his means.

Johnson received his bachelor’s degree from the University of Chicago in 1942.

Johnson started with Pace’s insurance company as an office boy. Within two years, he had risen to become the company president’s personal assistant.

Among Johnson’s responsibilities as Pace’s assistant was the task of scanning the press to find and save news clippings of interest to his boss. Johnson has stated that this task is what first prompted him to think about starting a publication aimed at an African American readership.

Initially, everyone Johnson discussed his idea with discouraged him. However, his mother had great faith in him and offered to back up that faith with a small loan. To cover the rest of his start-up expenses, Johnson sold charter subscriptions.

In 1942, Johnson brought out the first issue of Negro Digest (the name was later changed to Black World). Negro Digest—which was published by the Johnson Publishing Company (JPC) founded the same year—proved to be quite successful, eventually reaching a circulation of 100,000.

Johnson’s fundamental inspiration was to create a magazine similar to Life in quality and appearance, but which focused on the lives and achievements of famous and financially successful African Americans.

Ebony was wildly popular from the outset. Indeed, its initial print run of a quarter million copies quickly sold out.

Over time, Ebony’s emphasis on the rich and famous gradually gave way to an increased engagement with current events, especially—as the 1940s gave way to the ‘50s and ‘60s—the civil rights movement and race relations. The magazine did not flinch from covering many controversial topics of the time.

Johnson insisted on maintaining the highest journalistic standards, going to great lengths to recruit trained writers, photographers, and historians, as well as other academic professionals, to write the magazine’s hard-hitting photo-essays.

Johnson also hired African Americans wherever possible. For example, all the photographic models for the magazine’s advertisements were black.

In summary, everything in Ebony was printed with the black consumer in mind and was ultimately geared to presenting a positive image of black America.

In 1951, Johnson launched another publication, which became an outstanding nationwide success. Its name was Jet.

Jet was a digest-sized format, weekly news magazine with black and white photographs. It was marketed as a more-compact and more-economical version of Ebony (though it never achieved financial parity with Johnson ‘s monthly magazine).

To run Jet, Johnson hired a recent Morehouse College graduate and Atlanta Daily World reporter by the name of Lerone Bennett, Jr. Bennett became a close associate of Johnson’s, soon moving up to the editor-in-chief position at Ebony, in which capacity he served for many years. Eventually, Bennett established a reputation as a scholar of black history in his own right.

In his later years, Johnson received a good deal of public recognition. The first African American to appear on Forbes’s list of “400 wealthiest Americans,” he was showered with many honorary doctorates, including from Carnegie Mellon University, the University of Southern California, and Harvard University.

During the late 1950s and early 1960s, Johnson was appointed by the US government as a Special Ambassador on missions to several foreign countries, including Russia, Poland, Kenya, and the Ivory Coast.

However, following Johnson’s death in 2005, the company he founded, JPC, fell on hard times, mainly because of changes affecting the entire print news industry due to the digital revolution.

JPC was eventually forced to file for bankruptcy in 2019.

Succeeding Against the Odds: The Autobiography of a Great American Businessman, with Lerone Bennett, Jr. (1989; pbk ed., 1992).

Books About Johnson and Ebony Magazine

West, E. James, Our Kind of Historian: The Work and Activism of Lerone Bennett Jr. (2022).