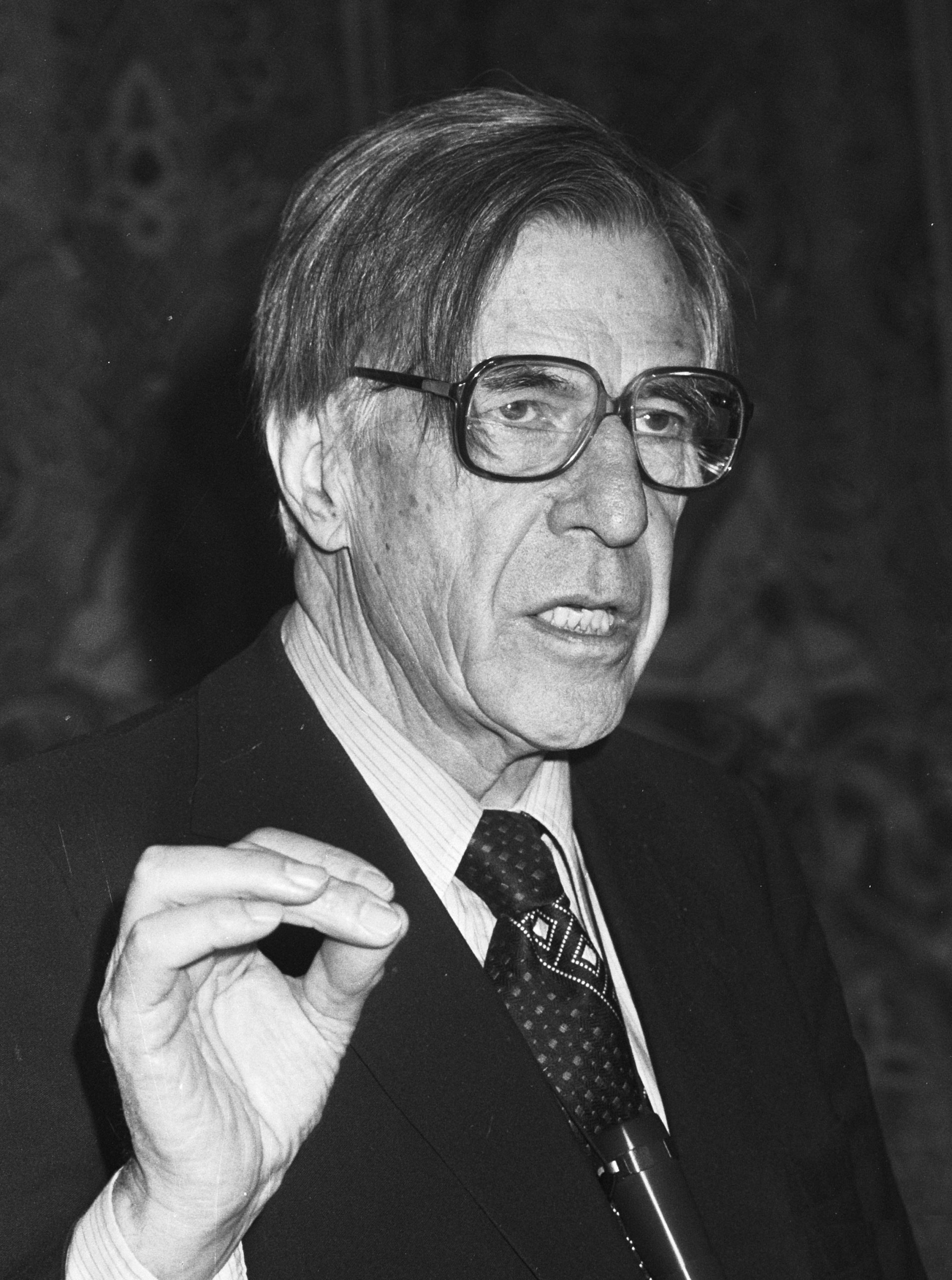 John Kenneth Galbraith (1908–2006) was born in Iona Station, Ontario, Canada, a small town on the southwestern peninsula of Ontario, a stone’s throw from Port Stanley, on the northern shore of Lake Erie. He was mostly raised in nearby Dunwich Township.

Galbraith’s father was a farmer and schoolteacher. His mother, a community activist, died when the boy was 14 years old. Both his parents were of Scottish descent.

After attending a one-room rural schoolhouse and a public high school, Galbraith attended a Catholic school to complete his secondary education.

For his higher education, Galbraith attended Ontario Agricultural College in Guelph, where he majored in animal husbandry. He obtained his bachelor’s degree in agriculture in 1931.

After completing his bachelor’s degree, Galbraith obtained a scholarship to study agricultural economics. He used the money to attend the University of California, Berkeley, where he received his PhD in 1934.

In 1934, Galbraith obtained part-time work as an instructor at Harvard University. He continued to work for Harvard in that capacity, on and off, for the next five years, until 1939.

Galbraith became a US citizen in 1937. Around the same time, he also obtained a fellowship to study at the University of Cambridge during the 1937–1938 academic year. While in Cambridge, he came under the influence of John Maynard Keynes.

After the end of his fellowship at Cambridge University, Galbraith spent the summer of 1938 traveling around the Continent, attending academic meetings and thinking through his own economic ideas.

During the 1939–1940 academic year, Galbraith taught at Princeton University.

In 1941, during the run-up to America’s entrance into World War II, Galbraith was engaged by the US government to do war work for the Office of Price Administration, whose remit was to prevent inflation from spinning out of control during the ramp-up of armaments production. He remained in this position for two years.

In 1943, Galbraith was appointed an editor of Fortune magazine, a position he held until 1948.

In 1946, Galbraith took a leave of absence from Fortune to serve in the US government once again, this time in the State Department’s Office of Economic Security Policy. However, his dovish political beliefs were out of tune with the times, and he soon resigned this post.

Years later, in 1968, Galbraith wrote a satirical novel entitled The Triumph, exposing his frustration with what he perceived as the absurdities of the American foreign policy establishment.

In 1949, Galbraith was appointed a professor of economics at Harvard University. He remained at Harvard until his retirement in 1975, when he was named the Paul M. Warburg Professor of Economics, Emeritus.

During his Harvard years, Galbraith took numerous leaves of absence to work for the US government in a variety of capacities.

In 1952, Galbraith was recruited by his friends Arthur M. Schlesinger, Jr., and George Ball to work as a speechwriter for the unsuccessful presidential campaign of the Democratic candidate, Adlai Stevenson.

From 1961 to 1963, Galbraith served as President John F. Kennedy‘s ambassador to India, where he won the confidence of Indian Prime Minister Jawaharlal Nehru, who sought his advice on economic matters.

After President Kennedy’s assassination, his successor, President Lyndon B. Johnson, often sought Galbraith’s advice on the conduct of the war in Vietnam. Galbraith believe the war to be a mistake and consistently counseled Johnson to scale back US involvement, though to no avail.

In 1968, Galbraith became heavily involved in the campaign for the unsuccessful Democratic presidential nomination of Senator Eugene McCarthy. Galbraith was the McCarthy campaign’s floor manager during the chaotic 1968 Democratic Party convention in Chicago.

In 1972, Galbraith played a similar role in the unsuccessful general election campaign of Senator George McGovern.

Over the years, Galbraith also traveled the world widely as an independent expert to provide economic advice to foreign governments, including those of the USSR and the People’s Republic of China.

Galbraith is considered a significant figure in the development of the field of institutional economics, within a broadly Keynesian or post-Keynesian framework. He was also an influential figure within American politics, particularly during the 1950s and the 1960s.

Galbraith has said he was influenced by reading Thorstein Veblen, who rejected the formalism of the neoclassical economic consensus as being divorced from reality.

Following Veblen, Galbraith believed that it was inherently impossible to distill economic activity into a set of mathematical laws, because the market is the product of the inconceivably complex cultural and political milieu in which it embedded.

More particularly, Galbraith held that many important causal factors stemming from social institutions had been ignored by economists. Among these institutions were the artificial separation of corporate ownership from management, the phenomenon of oligopoly, and the massive influence of government spending, especially by the military.

Galbraith felt that most economists had neglected these factors because they are not reducible to mathematical models. In this respect, they were correct! However, Galbraith believed that economists had learned the wrong lesson. The correct moral was not to neglect institutional factors, but to abandon the illusion of formal methods.

For these reasons, Galbraith focused his own research and writing on the older approach of political economy in lieu of the formalism of classical economics.

Galbraith was hugely prolific, but three of his books are considered his most important contributions from an economic point of view.

First, in American Capitalism, published in 1952 (see “Selected Works Authored or Co-authored by Galbraith” below), Galbraith showed that the American economy is dominated by a threefold, interlocking structure consisting of big business, big labor, and big government. He also depicted industry lobby groups and labor unions as centers of what he called “countervailing power.” Finally, he traced the historical path by which this state of affairs had come about.

Second, in The Affluent Society, published in 1958, Galbraith promoted Keynesian spending on big public projects, such as highways, education, and welfare. This book had a significant influence on the Kennedy/Johnson “War on Poverty.” It also contained one of the first critiques of the assumption that economic growth should be the principal aim of government.

Third, in The New Industrial State, published in 1967, Galbraith pointed out the failure of the classical economic model of competitive markets governed by consumers’ decisions.

The book also explored the ways in which the competitive market is distorted by manipulation on the part of big businesses functioning as an oligopoly.

Ambassador’s Journal: A Personal Account of the Kennedy Years (1969).

Economics and the Public Purpose (1973).

A View from the Stands: Of People, Politics, Military Power, and the Arts (1986).

Economics in Perspective: A Critical History (1987); published in the UK under the title, History of Economics: The Past as the Present (1987).

A Short History of Financial Euphoria (1993).

A Journey Through Economic Time: A Firsthand View (1994).

The Economics of Innocent Fraud: Truth for Our Time (2004).

Dunn, Stephen P., “John Kenneth Galbraith and the Theory of the Firm,” in by Michael Dietrich and Jackie Krafft, eds., Handbook on the Economics and Theory of the Firm. Cheltenham, UK: Edward Elgar Publishing (2012).

Friedman, Milton, Friedman on Galbraith, and On Curing the British Disease (1977).