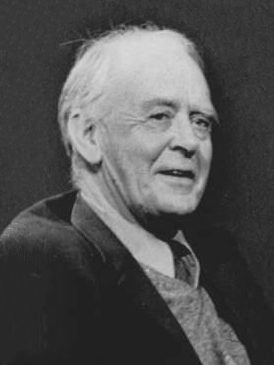 John Richard Hicks (1904–1989) was born in Warwick, UK, a town in the English midlands not far from Birmingham to the northwest, and a stone’s throw from and Coventry to the northeast and from Stratford-upon-Avon to the southwest.

Hicks’s father was a reporter for a local Warwick newspaper.

Thanks to a scholarship based on the mathematical ability Hicks demonstrated from an early age, he was able to receive his secondary education at Clifton College, a private boarding school in Bristol.

While still on a mathematics scholarship, Hicks matriculated at Oxford University’s Balliol College in 1922.

At Oxford, in addition to studying math, Hicks initially studied literature and history. Then, during his second year, he signed up for Oxford’s newly established program in “Philosophy, Politics and Economics.”

Hicks received his bachelor’s degree from Oxford in 1926.

After graduating, Hicks obtained a position as lecturer at the London School of Economics (LSE), where he taught until 1935.

During his years at the LSE, Hicks became a close associate of Lionel Robbins. He also made the acquaintance of many other well-known economists, including Friedrich A. Hayek, Abba P. Lerner, Nicholas Kaldor, and Ursula Webb.

In 1935, Hicks and Ursula Webb were married, after which Webb was known professionally as Ursula Hicks.

In 1935, Hicks was also elected a fellow of Gonville and Caius [pronounced “Keys”] College at Cambridge University. Hicks taught at Cambridge for three years, until 1938.

Hicks spent his years at Cambridge writing Value and Capital (see “Selected Works by Hicks” below)—often considered to be his magnum opus—which was published in 1939.

In this book, Hicks widened his early focus on labor economics to a broader concern with welfare economics (the impact of the economy on the welfare of society as a whole). In particular, in Value and Capital he showed how welfare economics can be applied to social accounting.

In 1938, Hicks was hired as a full professor at the University of Manchester, where he taught until 1946.

In 1946, Hicks returned to his alma mater, Oxford University. Initially, he was a research fellow at Nuffield College. Then, in 1952, he was appointed the Drummond Professor of Political Economy.

Finally, in 1965, Hicks became a research fellow of All Souls College, a post he held until his retirement in 1971.

Hicks began life as a labor economist focused primarily on industrial relations. Over time, he gradually moved into the broader field of welfare economics.

In his later work, Hicks was able to apply his background in mathematics to the formal analysis of the causal effects of economic factors on the welfare of society as a whole.

Specifically, in Value and Capital, Hicks built on the earlier concept of ordinal utility, focusing on the now-standard distinction in demand theory between the substitution effect and the income effect in the case of two goods.

The book then generalized the previously established analysis to the case of one good and a “composite good”—that is, all other goods—aggregating individuals and businesses throughout the economy by means of supply and demand.

Hicks anticipated the aggregation problem, especially for the stock of capital goods.

In addition to these analyses, Value and Capital advanced the state of play of economics at the time in three main ways: (1) it introduced formal general equilibrium theory to an English-speaking audience; (2) it refined the earlier form of the theory in order to make it suitable for dynamic analysis; and (3) it attempted for the first time to construct a rigorous model of the stability conditions for general equilibrium.

In the same year that he published Value and Capital, 1939, Hicks also developed the “compensation criterion”—which later became known as the “Kaldor–Hicks efficiency”—which provided a model making welfare comparisons between the expected consequences of alternative public policies (or states of the economy).

Even before Value and Capital was published, Hicks had already made what is perhaps his single best-known contribution to macroeconomics, namely, the so-called “Hicks–Hansen,” or “IS–LM,” model, published in his 1937 paper “Mr. Keynes and the “Classics” (see below).

IS–LM is a model of general equilibrium in which equilibrium is defined as the point of intersection of the “investment–saving” (IS) curve and the “liquidity preference–money supply” (LM) curve.

In the 1937 paper, Hicks used the IS–LM model to provide a formal interpretation of the General Theory of Employment, Interest, and Money, which John Maynard Keynes had published the previous year.

At the most abstract level, in his 1937 paper and the 1929 book, Hicks maintained that the economy may be understood as a balance among three factors: money, consumption, and investment.

In his later years, Hicks came to doubt the validity of his own IS–LM model, dismissing it in a 1980 paper as a “classroom gadget.”

Finally, Hicks is also famous for his mathematical formalization of income for accounting purposes.

Value and Capital: An Inquiry into Some Fundamental Principles of Economic Theory (1939; second edition, 1946).

The Social Framework: An Introduction to Economics (1942).

A Contribution to the Theory of the Trade Cycle (1950).

“Measurement of Capital in Relation to the Measurement of Other Economic Aggregates,” in D.C. Hague, ed., The Theory of Capital: Proceedings of a Conference held by the International Economic Association. London: Palgrave Macmillan (1961).

The Crisis in Keynesian Economics (1974).

Collected Essays in Economic Theory, Volume I: Wealth and Welfare (1981).

Procházka, David, “The Hicks’ Concept of Income and Its Relevancy for Accounting Purposes,” European Financial and Accounting Journal, 4: 37–60 (2009).