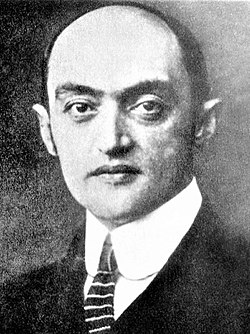 Joseph A. Schumpeter (1883–1950) was born in the town of Triesch in the Hapsburg province of Moravia (now Třešť, Czech Republic).

Schumpeter’s family was Catholic, of mixed German and Czech origins. However, he was raised in a family that was self-consciously Germanic in language and culture.

The Schumpeter family was well-to-do. However, his father, who owned a factory, died when young Joseph was only four years old, drastically reducing the family’s social and economic standing.

Upon graduating from the Theresianum, Schumpeter entered the University of Vienna with the intention of studying law. However, after taking courses from the first-generation Austrian economists Eugen von Böhm-Bawerk and Friedrich von Wieser, he decided to combine his legal studies with economics.

In his classes, Schumpeter became well-acquainted with his fellow students Ludwig von Mises and Friedrich von Hayek. The three of them are often accounted the “second generation” of Austrian economists.

Schumpeter received his PhD in political economy in 1906.

After graduating, Schumpeter spent three years traveling on various research grants. He obtained his first teaching position at the University of Czernowitz, Romania (now Chernivtsi, Ukraine), in 1909. Two years later, in 1911, he moved to the university of Graz in Austria.

Following the break-up of the Austro-Hungarian Empire at the end of World War I, Schumpeter was appointed Minister of Finance of the rump “Republic of German-Austria” (the modern Austria) in 1918.

In 1921, Schumpeter left government service to embark upon a career in private banking as President of the Biedermann Bank in Vienna.

From 1925 until 1932, Schumpeter held a chair at the University of Bonn in Germany. During this period, he held visiting professorships at Harvard University in the US and at the Tokyo College of Commerce in Japan.

In 1932, Schumpeter relocated to the US, where he was able to parlay his existing relationship with Harvard into steady employment. During this period, he and his wife were involved in assisting with the resettlement of Central European economists who had become refugees following Hitler’s accession to power.

Schumpeter continued to serve as a professor of economics at Harvard until his death in 1950. Over the years, he had many students who would go on to win high recognition in the field, including Paul Samuelson, James Tobin, Hyman Minsky, and Nicholas Georgescu-Roegen, among many others.

Schumpeter became an American citizen in 1939.

Schumpeter is undoubtedly best known for the concept of “creative destruction,” an idea he did not invent (Werner Sombart was the first to use the term), but which he made famous and which is closely associated with his name.

“Creative destruction” refers to the doctrine that unprofitable enterprises should be allowed to fail, because to prop them up artificially with a government infusion of capital—when replicated at a large scale—would lead to a massive misallocation of resources away from their most efficient employment. The result of such misallocation would be the underperformance of the economy as a whole.

Although creative destruction is one of the central tenets of Austrian economics—and, indeed, is often mocked today by left-leaning critics of “neo-liberalism,” just as it continues to be invoked by the latter’s defenders—Schumpeter was not in fact as doctrinaire as some of his “second-generation” Austrian confrères, especially Mises. He was perfectly prepared to look beyond the market mechanism narrowly construed, if light could be thrown on economic reality by taking other factors into consideration.

For example, Schumpeter was very interested in the interplay between social and institutional factors, on the one hand, and economic factors, on the other. He argued that innovation—especially, technological innovation—is the most important factor in promoting economic growth.

He then followed up on this insight with a series of pioneering studies of entrepreneurship, in which he argued that very large enterprises are more important than small and medium-sized ones in driving innovation and economic growth, because they have the resources to undertake their own research and development.

This view had implications for government policy—for example, anti-trust policy—that some other Austrian economists found uncongenial. Indeed, it is ironic that this sociological dimension of Schumpeter’s thought has sometimes been better appreciated by Keynesian, Marxian, and so-called “heterodox” economists than by other Austrians.

In addition to his work on the conceptual foundations of political economy and on the sociology of business enterprises and other institutions, Schumpeter also did path-breaking research in the history of economic thought. In this regard, he played an important role in bringing the seminal contribution of the sixteenth-century Salamanca School of economics to the attention of the public.

Principal Works of Joseph A. Schumpeter

The Nature and Essence of Economic Theory (1908).

The Theory of Economic Development: An Inquiry into Profits, Capital, Credit, Interest, and the Business Cycle (1911).

The Economics and Sociology of Capitalism (1918).

Business Cycles: A Theoretical, Historical, and Statistical Analysis of the Capitalist Process (1939).

Essays: On Entrepreneurs, Innovations, Business Cycles, and the Evolution of Capitalism, edited by Richard V. Clemence (1951)

Andersen, Esben Sloth, Joseph A. Schumpeter: A Theory of Social and Economic Evolution (2011).

Shionoya, Yuichi, Schumpeter and the Idea of Social Science: A Metatheoretical Study (1997).