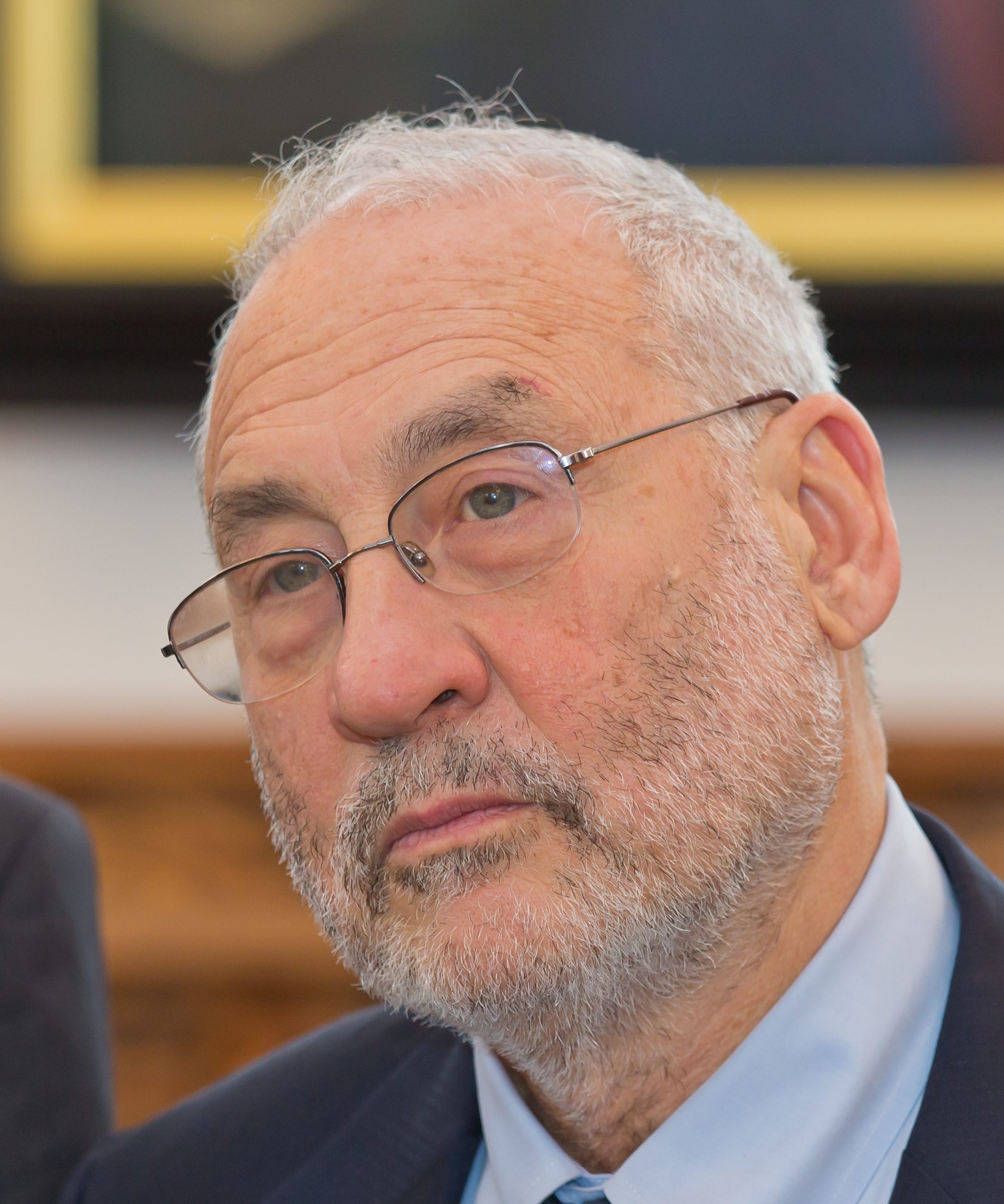 Joseph Eugene Stiglitz (b. 1943) was born in the then-thriving industrial city of Gary, Indiana, on the southern shore of Lake Michigan.

Stiglitz’s parents were second-generation Jewish immigrants to the US. His father was an insurance salesman, while his mother was a schoolteacher.

For his primary and secondary education, Stiglitz attended the public schools in Gary.

For his higher education, Stiglitz attended Amherst College in Massachusetts, where he obtained his bachelor’s degree in 1964.

Stiglitz has stated that his year at Cambridge helped him to appreciate the importance of the work of John Maynard Keynes and of macroeconomic theory, more generally.

In 1966, Stiglitz began his doctoral studies at the Massachusetts Institute of Technology (MIT), in Cambridge, Massachusetts.

Stiglitz received his PhD in economics from MIT in 1967.

During his doctoral work at MIT, Stiglitz also held an assistant professorship at the university.

After graduating, Stiglitz returned to Cambridge, this time at Gonville and Caius College, where he continued to pursue his research interests until 1970.

After a brief stint as a visiting professor at University College in Nairobi, Kenya, Stiglitz returned to the US. He received an appointment as a Professor of Economics at Yale University in New Haven, Connecticut, where he taught for the next two years.

During the 1973–1974 academic year, Stiglitz was back in the UK, this time at Oxford University’s St. Catherine’s College.

From 1974 until 1976, Stiglitz was a Professor of Economics as Stanford University in California.

After two more years at Oxford from 1976 until 1978, during the 1978–1979 academic year, Stiglitz held the position of Oskar Morgenstern Distinguished Fellow and Visiting Professor in the School of Mathematics at the Institute for Advanced Study in Princeton, New Jersey.

In 1979, Stiglitz settled into a professorship at Princeton University, where he taught for the next nine years.

That same year, 1979, Stiglitz was awarded the John Bates Clark Medal for the best American economist under the age of 40.

During the 1990s and 2000s, Stiglitz also held a wide variety of institutional memberships and visiting professorships—too many to enumerate here.

In 2001, Stiglitz shared the Nobel Memorial Prize in Economic Sciences with George A. Akerlof and Michael Spence.

Stiglitz’s Nobel Lecture, “Information and the Change in the Paradigm in Economics,” was published the following year in the American Economic Review (see “Selected Works Authored or Co-authored by Stiglitz” below).

Joseph Stiglitz is associated with the New Keynesian movement in economics—an effort to bring Keynesian theory up to date by bringing to bear a variety of factors uncovered by more recent research.

Among the many factors that may have a bearing on modifying the basic Keynesian framework, the three which Stiglitz explored most thoroughly are risk aversion, the impact of monopolies and oligopolies on competition, and information asymmetry. For present purposes, we shall focus on his work on the latter phenomenon, for which he was recognized by the Nobel Prize committee.

Stiglitz, together with Akerlof and Spence, developed a theoretical foundation for the analysis of markets with asymmetric information. Their work has had many practical applications to everything from traditional agricultural markets to modern financial markets.

Stiglitz, in particular, focused on the question of the various means by which market adjustments may be made to compensate for information asymmetry. For instance, in the insurance example mentioned above, the insurer might require the customer to submit to a physical examination to reduce the information asymmetry between them.

In summary, Stiglitz’s greatest contribution in his technical work has lain in demonstrating how many otherwise puzzling empirical market phenomena may be explained as resulting from market adjustments to information asymmetry.

In addition to his technical work in economics, Stiglitz has been a highly active public intellectual, through both his voluminous popular writings and his innumerable public lectures, op-ed columns, and interviews.

The main thrust of Stiglitz’s public interventions has consistently been to lend support to the Keynesian vision of replacing the “invisible hand” of the marketplace with the “visible hand” of centralized planning by government economic experts like himself.

Lectures on Public Economics, with Anthony B. Atkinson (1980).

The Theory of Commodity Price Stabilization: A Study in the Economics of Risk, with David M.G. Newbery (1981).

Peasants versus City-Dwellers: Taxation and the Burden of Economic Development, with Raaj K. Sah (1992).

Joseph Stiglitz and the World Bank: The Rebel Within, edited by Ha-Joon Chang (2001).

Globalization and Its Discontents (2002).

Towards a New Paradigm in Monetary Economics, with Bruce Greenwald (2003).

Fair Trade for All: How Trade Can Promote Development, with Andrew Charlton (2005).

“Simple Formulae for Optional Income Taxation and the Measurement of Inequality,” in Kaushik Basu and Ravi Kanbur, eds., Arguments for a Better World: Essays in Honor of Amartya Sen, Volume I: Ethics, Welfare, and Measurement. Oxford: Oxford University Press; pp. 535–66 (2009).

The Stiglitz Report: Reforming the International Monetary and Financial Systems in the Wake of the Global Crisis (2010).

Mismeasuring Our Lives: Why GDP Doesn’t Add Up, with Amartya Sen and Jean-Paul Fitoussi (2010).

Freefall: America, Free Markets, and the Sinking of the World Economy (2010).

The Price of Inequality: How Today’s Divided Society Endangers Our Future (2012).

The Great Divide: Unequal Societies and What We Can Do About Them (2015).

People, Power and Profits: Progressive Capitalism for an Age of Discontent (2019).

Measuring What Counts; The Global Movement for Well-Being, with Jean-Paul Fitoussi and Martine Durand (2019).

Readings in the Modern Theory of Economic Growth, with Hirofumi Uzawa (out of print) (1969).

Frontiers of Development Economics: The Future in Perspective, with Gerald M. Meier (2001).

Time for a Visible Hand: Lessons from the 2008 World Financial Crisis, with Stephany Griffith-Jones and José Antonio Ocampo (2010).

Galí, Jordi, Monetary Policy, Inflation, and the Business Cycle: An Introduction to the New Keynesian Framework and Its Applications, second edition (2015).