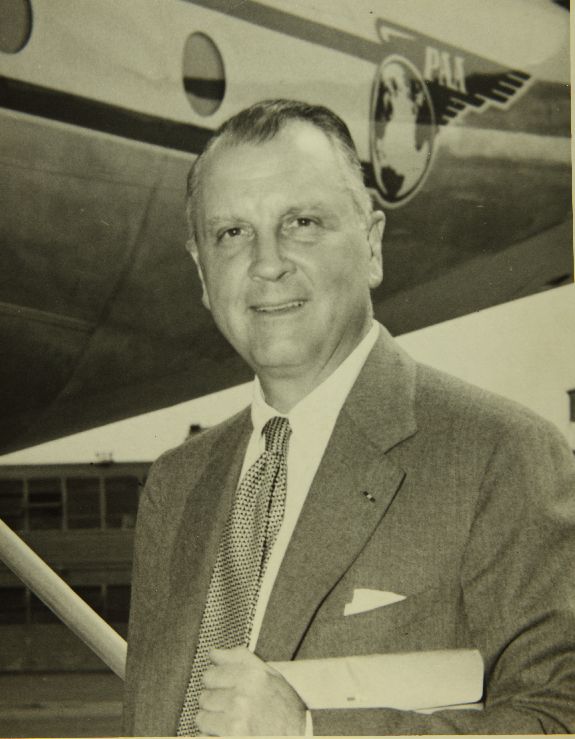 Juan Terry Trippe (1899–1981) was born in Sea Bright, New Jersey, a small town on the barrier island off the coast of central New Jersey. It is situated at the southern end of the inlet that joins Shrewsbury Bay to the south with the Navesink River and Sandy Hook Bay to the north.

Trippe’s ancestors immigrated to Maryland from England in the seventeenth century. His great-great-grandfather was a ship’s captain, who in 1803 commanded a US Navy schooner during the First Barbary War.

Trippe’s given name is the male form of “Juanita.” His father bestowed it on him in honor of the Venezuelan-born wife of one his uncles, who was named Juanita.

Trippe was educated in private schools, graduating in 1917 from the Hill School in Pottstown, Pennsylvania, about 35 miles northwest of Philadelphia.

Trippe enrolled in Yale University in New Haven, Connecticut, but soon left to join the US effort to assist France in her struggle with Germany during the closing years of World War I.

In the family tradition, Trippe joined the US Navy, but wanted to learn to fly then-recently invented airplanes. He was accepted into the naval aviation program, completing his training in the summer of 1918.

However, the Armistice was signed before Trippe had a chance to be deployed to France, so he never saw action in the war.

After being demobilized, Trippe returned to Yale, completing his bachelor’s degree in 1921.

In 1920, Trippe attended the first meeting of the National Intercollegiate Flying Association, at which he was selected to serve as the organization’s first Treasurer.

After graduating from Yale, Trippe initially worked on Wall Street. However, he found the work boring.

Trippe’s first business venture proved successful and gradually he began investing in other small airlines of the day, while casting about for an opportunity to found a proper airline of his own.

In 1927, Trippe created the Aviation Corporation of the Americas, based in Florida. After further financial maneuvers, the company soon emerged with a new name: Pan American Airways, universally known as “Pan Am.”

Pan Am’s first regularly scheduled flight took place between Key West, Florida, and Havana, Cuba, in 1927. During the 1920s and 1930s, the company gradually expanded its service throughout Central and South America.

In 1933, Juan Trippe bought a 45% share in the China National Aviation Corporation, which allowed Pan Am to begin operating in the western Pacific region.

Trippe continued to expand his operations throughout the 1930s and the Second World War. In 1942, Pan Am became the first private airline to circumnavigate the world.

Following the war, Trippe was one of the first to see the potential of introducing jet aircraft into the private air travel industry. Pan Am became a major purchaser of Boeing 707 and Douglas DC-8 jet aircraft.

In the mid-1960s, Trippe urged friends at the Boeing Company to build a much larger aircraft, which would allow fares to be reduced still further, which would truly bring international air travel to the masses.

The Boeing 747 was finally brought to market in 1989, eight years after Trippe’s death.

In 1968, Trippe stepped down as President and Chairman of the Board of Pan Am.

After Trippe stepped down from day-to-day management, Pan Am ran into serious financial problems. This was due to a variety of factors.

One factor was the spike in oil prices that occurred during the 1970s. Another was the failure of demand for air travel to grow commensurately with the increased capacity of the company’s new fleet of Boeing 747s.

Finally, the First Persian Gulf War in 1990–1991 caused fuel prices to spike once again. This was the last straw, which tipped Pan Am into bankruptcy.

Since 1991, the name “Pan American” has been resurrected several times. However, there is no connection between these more-recent companies and the one founded by Juan Trippe.

Trippe was responsible for several innovations in the history of the American airline industry.

For one thing, Trippe grasped—in a way unlike any other airline executive—the crucial importance of adopting technological innovations for the continuous improvement and growth of the civilian airline industry.

For another, Trippe was a firm believer in the idea of bringing air travel to average Americans from all walks of life. This commitment translated into such innovations as the concept of the tourist class, which Pan Am was the first to introduce into the industry.

Finally, Trippe had the idea of building a chain of moderately priced hotels located near major international airports to provide inexpensive and easy-to-access accommodations for middle-class customers.

To realize this vision, in 1946 Trippe created the InterContinental Hotels Group as a division of Pan Am.

Selected Books About Trippe and Pan Am

Bender, Marylin and Selig Altschul, The Chosen Instrument: Pan Am, Juan Trippe; The Rise and Fall of an American Entrepreneur (1982).

Daley, Robert, An American Saga: Juan Trippe and His Pan Am Empire (1980).

Josephson, Matthew, Empire of the Air: Juan Trippe and the Struggle for World Airways (1944).