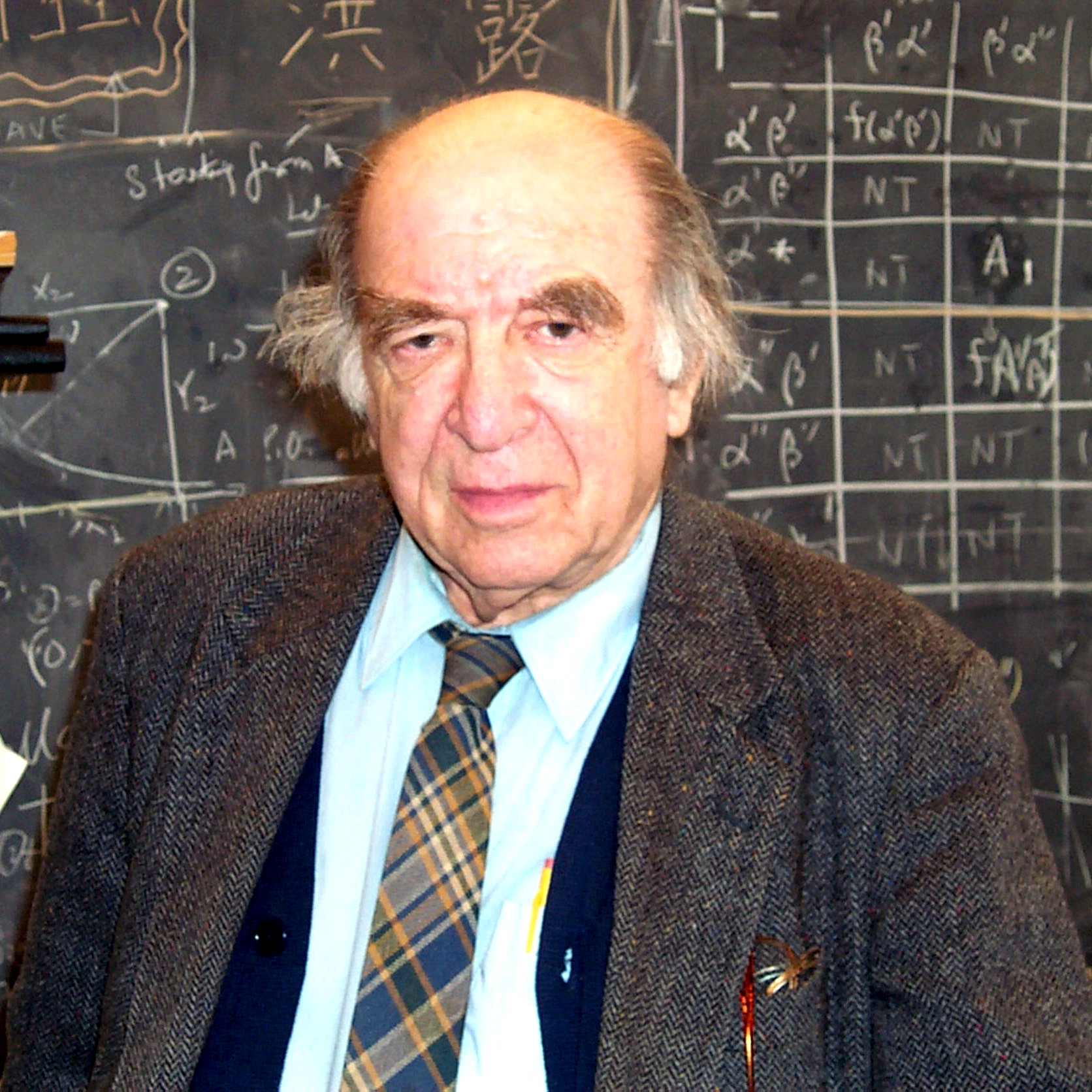 Leonid Hurwicz (1917–2008) was born in Moscow into a Polish-Jewish family, only months before the outbreak of the Bolshevik Revolution. The family returned to their native Warsaw a short time after the boy’s birth.

Hurwicz received his law degree in 1938 from the University of Warsaw.

When World War II broke out the following year, with Adolph Hitler‘s invasion of Poland on September 1, 1939, Hurwicz was pursuing graduate studies at the London School of Economics, with Nicholas Kaldor and Friedrich A. Hayek.

The following year, in 1939, Hurwicz traveled to Geneva, Switzerland, where he studied at the Graduate Institute of International Studies.

As the international political situation continued to deteriorate, Hurwicz decided to make for the US, which he reached by way of Portugal in 1940.

Several of Hurwicz’s relatives, including his father and his brother, were able to join him in the US, after being released from forced-labor camps in the Soviet Union.

In the US, Hurwicz studied economics, first at Harvard University and then at the University of Chicago.

While at Harvard, in 1941, Hurwicz was hired as a research assistant by the economist Paul Samuelson at the Massachusetts Institute of Technology (MIT). Harvard and MIT are both located in Cambridge, Massachusetts, about a mile and a half apart.

After moving to the University of Chicago later in 1941, Hurwicz studied economics for about a year with Jacob Marschak and Tjalling Koopmans, while also working as a research assistant for Oskar Lange.

However, due to the need to earn more money, Hurwicz soon dropped out of his doctoral program at Chicago, leaving the future Nobel laureate in economics with no academic degree in that subject.

Hurwicz now took on three part-time jobs. One was with the Chicago-based Illinois Institute of Technology for the duration of the war, where he taught electronics to soldiers serving with the US Army Signal Corps.

Hurwicz’s second job during the war was as a researcher for the Cowles Commission for Research in Economics.

The third job Hurwicz accepted at this time was as an instructor with the University of Chicago’s Institute of Meteorology. His main job there was to teach statistics. He was also permitted to offer a course on statistics within the Department of Economics itself.

At the end of the war, Hurwicz received a Guggenheim Fellowship for the 1945–1946 academic year, which gave him some financial breathing space.

Eventually, Hurwicz was able to find a regular, full-time position as an associate professor of economics at Iowa State College (now University) in Ames, Iowa.

In 1950, Hurwicz left his position at Iowa State to take up a one-year visiting professorship back at the University of Chicago, where he replaced Koopmans while he was on leave.

An inveterate workaholic, Hurwicz also worked during this year as a research professor with the University of Illinois at Chicago and as a consultant with both the RAND Corporation and the US Bureau of the Budget.

On top of that, Hurwicz continued to work as a consultant for the Cowles Commission up until the early 1960s.

In 1952, at the end of his visiting professorship at Chicago, Hurwicz was recruited by Walter Heller to join the regular faculty of the University of Minnesota in Minneapolis, where he was given a professorship in economics and mathematics with the School of Business Administration.

Minnesota was Hurwicz’s home base for the rest of his career. However, he made frequent forays as a visiting professor to universities elsewhere, both in the US and in the rest of the world.

By the end of his career, Hurwicz had become the Curtis L. Carlson Regents Professor of Economics at the University of Minnesota, a title which he attained in 1989.

In 2007, Hurwicz shared the Nobel Memorial Prize in Economics Sciences with Eric Maskin and Roger Myerson.

Hurwicz’s Nobel Lecture, “But Who Will Guard the Guardians?,” was published the following year in the American Economic Review (see “Selected Works Authored or Co-authored by Hurwicz” below).

When Hurwicz shared the 2007 Nobel Memorial Prize in Economic Sciences with Eric Maskin and Roger Myerson, the selection committee said it had conferred the award on the trio “for having laid the foundations of mechanism design theory.”

Mechanism design theory is a field of political economy that is simultaneously a subfield of game theory.

The “mechanisms” in question are interpreted as economic incentives oriented towards desired objectives, on the assumption of rationality on the part of all actors.

The theory takes an “objectives-first” approach, which implies working “backwards” towards the best incentive structure (“mechanism”) in order to attain the given objectives. As an example of “reverse engineering,” mechanism design theory is sometimes referred to as “reverse game theory.”

The theory has been applied very broadly, from market design, auction theory, and social choice theory in economics and politics, to internet interdomain routing and sponsored search auctions in technological contexts such as networked-systems.

Mechanism design theory is a subfield of general game theory. More specifically, it studies solutions to problems that belong to the class of private-information games.

Hurwicz has explained that:

. . in a design problem, the goal function is the main “given,” while the mechanism is the unknown. Therefore, the design problem is the “inverse” of traditional economic theory, which is typically devoted to the analysis of the performance of a given mechanism.

1. Works Authored or Co-authored by Hurwicz

Mirowski, Philip and Edward Nik-Khah, “Going the Market One Better,” in idem, The Knowledge We Have Lost in Information: The History of Information in Modern Economics. Cheltenham, UK: Edward Elgar Publishing (2017).