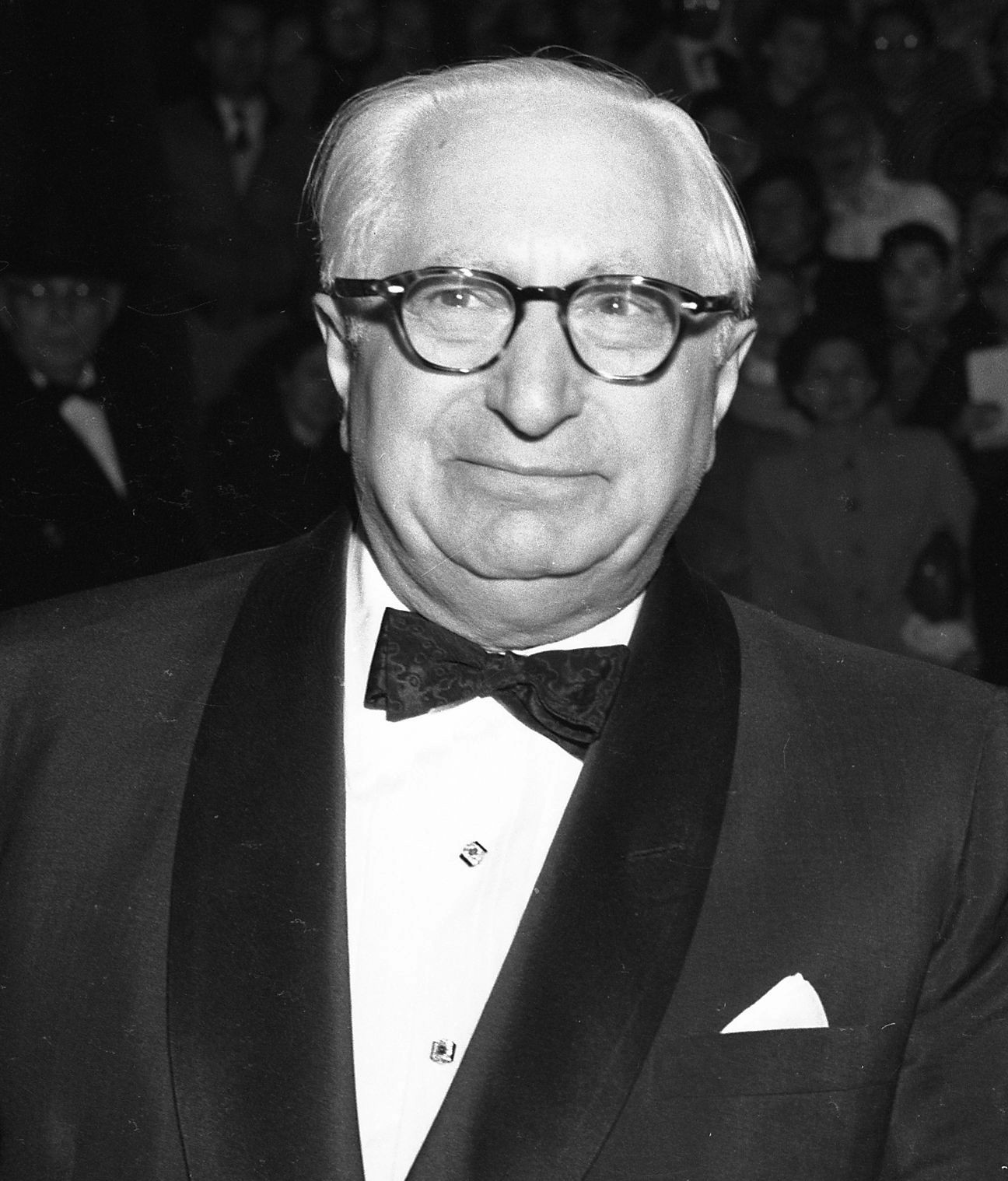 Louis Burt Mayer (1884–1957) was born Eliezer (or Lazar) Meir (or Mayer) into a Jewish family in the town of Dymer, just north of Kyiv, in what is now Ukraine but was then the Russian Empire.

There remains some uncertainty surrounding the details of the place and year of Mayer’s birth, but the scholarly consensus appears to be converging on the above account.

In 1887, Mayer’s family emigrated to the US, initially settling on Long Island in New York.

Mayer’s father was unskilled in any manual trade and struggled to make a living.

Eventually, the father started up his own scrap metal business, and Mayer dropped out of school at the age of 12 in order to help his father make a success of the company.

The young Mayer collected scrap metal from the general public by pushing a handcart with a sign that read “Junk Dealer” through the streets of St. John.

The language of the home Mayer grew up in was Yiddish. His father never managed to learn English well. For this reason—and because he was the oldest boy in the family—Mayer felt the weight of the family’s financial well-being on his shoulders from an early age.

In addition, on account of the early interruption of his formal schooling, Mayer developed a strong desire to advance his own self-education.

During his teenage years, Mayer began to frequent vaudeville performances in St. John. He soon formed the ambition to break into the entertainment industry somehow, seeing it as a way out of the poverty and monotony of his life.

In 1904—at the age of 20—Mayer moved to Boston, Massachusetts, where he continued to work in the junk business, but also began to actively explore ways to obtain a toehold in the entertainment business.

In 1907, Mayer acquired, refurbished, and reopened an old burlesque theater in Haverhill, Massachusetts, a town in the far northeastern part of the state, a stone’s throw from the New Hampshire border.

Mayer began showing films—including some of a religious character to offset the sordid reputation the theater had acquired in its previous incarnation—with growing success.

For context, it is helpful to know that the very first public exhibition of a motion picture had occurred just 12 years earlier, in 1895, in France—namely, the Lumière Brothers’ L’arrivée d’un train en gare de La Ciotat [The Arrival of a Train in the Station of La Ciotat]. La Ciotat is a town on the French Riviera about halfway between Marseille and Toulon.

The film lasted for only 50 seconds, but it had some naïve spectators fleeing their seats in terror, desperate to escape the growing mass of the train looming out of clouds of steam.

By 1907, movie-fever was beginning to grip the public in the US as it had already done in Europe.

Within a few years, Mayer had formed his first company with a business partner and had purchased all four of the other theaters in Haverhill, forming the largest theater chain in New England at that time.

In 1914, Mayer and his partner founded a motion picture distribution agency in Boston, and two years later, in 1916, Mayer founded the Metro Pictures Corporation, a talent-booking agency located in New York City.

With his various film-related business interests growing rapidly, Mayer decided to relocate to Hollywood in 1918 with a view to forming his own film production company.

The company he founded, the Louis B. Mayer Pictures Corporation, developed its first film, called Virtuous Wives, in 1918. Unfortunately, it is now lost.

In 1922, Mayer met and formed a new partnership with Irving G. Thalberg. Thalberg was still in his early 20s—he was 15 years younger than Mayer—and the older man came to regard him as his son. He often referred to him as the “boy wonder.”

Mayer’s collaboration with Thalberg was a reflection of his awareness of his own limitations when it came to evaluating the potential of film projects to appeal to the American public. For this reason, Thalberg became heavily involved in the artistic details of the movies Mayer produced.

Two years later, in 1924, Mayer entered into a major business transaction, which transformed his position within the Hollywood studio system.

The theater-chain owner Marcus Loew had the idea of merging three relatively small, film-related companies, owned by himself, Samuel Goldwyn, and Mayer, into a single, giant, new Hollywood studio. After a period of financial turmoil and internal jockeying for position, the new studio emerged.

It was called Metro-Goldwyn-Mayer, popularly known as MGM.

While Loew was the owner of MGM, he appointed Mayer a vice president in charge of studio operations. Officially, Mayer reported to Loew (through one of his close associates), but he and Thalberg were the creative engine that ran MGM.

Mayer and Thalberg shared similar values and goals regarding filmmaking. They both aspired to make motion pictures of artistic quality, that would still draw in the masses.

To this end, Mayer and Thalberg would spare no expense to obtain the most brilliant stars—notably, the great Swedish silent-film actress, Greta Garbo, whom MGM introduced to American audiences. Indeed. Mayer is often credited with having invented the “star system,” meaning the Hollywood studios’ new self-understanding that film stars were the main product they were selling.

Additionally, Mayer and Thalberg created the most spectacular sets, hired the best writers—for example, Joseph L. Mankiewicz—and employed the most-innovative directors—for instance, Erich von Stroheim—that they could find. Occasionally, they were known to reshoot an entire picture if they felt it was warranted.

Over time, as Thalberg aged and grew more self-confident, he began to seek a place for himself beyond Mayer’s shadow. The two men quarreled over whether prestige pictures or profits should take an increasingly important role in MGM’s repertoire.

Mayer brought in David O. Selznick to produce the more crowd-pleasing spectaculars he preferred, while Thalberg continued to work on bringing famous novels and historical incidents to the silver screen.

Nevertheless, Mayer was reportedly devastated by Thalberg’s sudden death from a heart attack in 1936, at the age of just 37.

Many observers forecasted MGM’s decline in the wake of Thalberg’s death. However, the next decade proved to be the strongest that the studio—and Hollywood as a whole—ever registered, in terms of both profitability and quality, not to speak of cultural influence.

The year 1939 is often cited as the most-distinguished year in the history of the cinema. Of the many great films released that year, Mayer’s MGM contributed Goodbye, Mr. Chips, Ninotchka, The Women, The Wizard of Oz, and Gone with the Wind.

As an East-European Jew, Mayer was of course highly conscious of events in Europe in the years leading up to World War II. On the other hand, MGM made as much as 40 percent of its income from its German and Europeans audiences. For this reason, the heads of many other Hollywood studios shied away from the theme of the Hitler regime.

While Mayer did not dare to develop films that reflected his real feelings, MGM did produce a couple of anti-Nazi films that did not actually name the dictator or his party, but were daring for the times: Three Comrades (1938) and The Mortal Storm (1940).

After America’s entry into the war, Mayer greenlighted the great film, Mrs. Miniver (1942), designed to foster support for the British war effort among the American public. Mrs. Miniver is essentially wartime propaganda, but it is surely one of the most elegant and moving propaganda films ever produced.

MGM’s continued success during this period made Mayer the first person in American history to earn a $1 million salary. Between 1937 and 1946, he was the highest-paid person in the US.

After the war, public taste underwent a profound shift, which is perhaps best evinced by the spate of realistically themed and expressionistically photographed crime films—which came to be known as film noir—that appeared during the late 1940s and early 1950s.

MGM had little role in this artistic and psychological ferment. Its commercial fortunes began to decline accordingly.

The studio that had done more than any other to artistically develop the film noir genre was RKO Pictures. For this reason, Mayer brought in an RKO executive named Dore Schary in an effort to inject new creative energy into MGM.

At the same time, however, Mayer doubled down on gaudy musicals during the 1950s. While such films did enjoy a broad audience at the time, it proved to be insufficient to halt or reverse MGM’s continuing decline.

Mayer stepped down from MGM in 1951, at which time Schary took over as the studio’s president.

Though Mayer continued to work as an independent producer for a few years, his time had passed. He died in Los Angeles from leukemia in 1957.

Selected Books About Mayer and MGM

Altman, Diana, Hollywood East: Louis B. Mayer and the Origins of the Studio System (1992).

Bingen, Steven, The MGM Effect: How a Hollywood Studio Changed the World (2022).

Crowther, Bosely, Hollywood Rajah: The Life and Times of Louis B. Mayer (1961).

Dick, Bernard F., That Was Entertainment: The Golden Age of the MGM Musical (2018).

Vieira, Mark A., Hollywood Dreams Made Real: Irving Thalberg and the Rise of M-G-M (2008).

Ziarko, Charles, MGM: Saving the Best for Last: Dore Schary and the Death of MGM (2013).