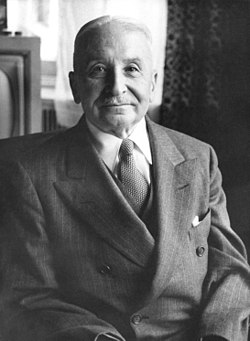 Mises was raised in a polyglot atmosphere of high achievement. In addition to his native German, the boy spoke fluent Polish and French, could understand English and Ukrainian, and had a reading knowledge of Latin and ancient Greek. His younger brother, Richard von Mises, became a distinguished mathematician, probability theorist, and member of the Vienna Circle.

Mises’s great-great-grandfather was first ennobled, enabling his forebears to add “von” to the family name. His father, Arthur Edler von Mises, was a railroad magnate who helped finance the construction of railroads throughout the Empire. The Austrian crown recognized his achievements by endowing him with the designation “Edler” [“noble”]. His son’s full name was Ludwig Heinrich Edler von Mises.

Mises’s mother was the niece of a Liberal Party member of the Austrian Parliament.

In 1904, Mises matriculated at the University of Vienna. Although he was formally a student in the law faculty, he sought out the classes taught by the famous economists Eugen von Böhm-Bawerk and Friedrich von Wieser. It was by this means that—like his teachers before him (see the Glossary entry for “Austrian Economics”)—Mises fell in love with the writings of the founder of Austrian economics, Carl Menger.

At this time, Mises also became acquainted with his economics classmates, Joseph A. Schumpeter and Friedrich A. Hayek, who (together with Mises himself) would eventually come to be known as the “second generation” of Austrian economists

After graduating, Mises worked briefly as a civil servant in the Austrian government’s Ministry of Finance before entering private practice with a Vienna law firm. In 1909, he got a job as an economic adviser with the Vienna Chamber of Commerce and Industry.

During World War I, Mises served on the eastern front as an officer with an artillery unit before being tapped by the War Department as an economic adviser. After the war, he was appointed Chief Economist with the Austrian Chamber of Commerce. From this perch, he also acted as an economic adviser to the fiercely patriotic and anti-Nazi Austrian Chancellor, Englebert Dollfuss.

In 1933, Adolf Hitler came to power next-door in Germany and the following year, 1934, a Nazi agent assassinated Dollfuss. That same year, with the handwriting of the coming Nazi takeover on the wall, Mises left Austria for Geneva, Switzerland, where he worked for several years as a professor at the Institut de Hautes Études Internationales [Graduate Institute of International Studies; now known simply as the Graduate Institute].

In 1940, with Europe in flames all around him, the 59-year-old Mises emigrated with his family to the United States. With aid from various funds and foundations, he was able to eke out an existence until he finally was able to obtain a position as an unsalaried Visiting Professor at New York University, where he taught from 1945 until his retirement in 1969. However, it was the private generosity of the many admirers of his work—especially that of the journalist and advertising executive, Lawrence Fertig—that helped make Mises’s life in exile supportable.

In 1947, Mises was one of the founding members—along with his long-time friend and intellectual jousting-partner, Friedrich A. Hayek—of the Mt. Pèlerin Society, an elite organization devoted to the advancement of Austrian economics.

During the early, European part of his career, Mises was highly productive. His first major book, on money and credit (see Bibliography below) appeared in 1912.

In 1922, Mises released a critical study of socialism, as a result of which he became a major participant, along with Hayek, in the public, highly rancorous Socialist Calculation debate. Along with Hayek, Mises argued that socialism—not just in practice, but in principle—inevitably suffers from three insurmountable difficulties:

In addition to his many other writings on economics and socialism, Mises is important for his writings in two additional fields: the sociology of the modern state; and a comprehensive philosophical anthropology providing an intellectual foundation for the free-market vision of the economy.

In the first category, we may mention a pair of studies by Mises analyzing what is now referred to as the “administrative state,” both published towards the end of World War II in 1944. (See the Bibliography below.)

In the second category, we have the magisterial Human Action, which is undoubtedly Mises’s masterpiece. Initially published in 1949 and later revised and expanded several times, the definitive edition of this indispensable, foundational investigation is a four-volume set published in 1996, long after the author’s death.

Some of Mises’s Main Works

Socialism: An Economic and Sociological Analysis (1922)

Omnipotent Government: The Rise of Total State and Total War (1944)

Human Action: A Treatise on Economics (1949)

Edwards, James Rolph, The Economist of the Country: Ludwig Von Mises in the History of Monetary Thought (1985)

Greaves, Bettina Bien, Mises: An Annotated Bibliography: A Comprehensive Listing of Books and Articles by and About Ludwig Von Mises (1993)

Hayek, Friedrich A., et al., Toward Liberty: Essays in Honor of Ludwig Von Mises on the Occasion of His 90th Birthday, two volumes (1971)