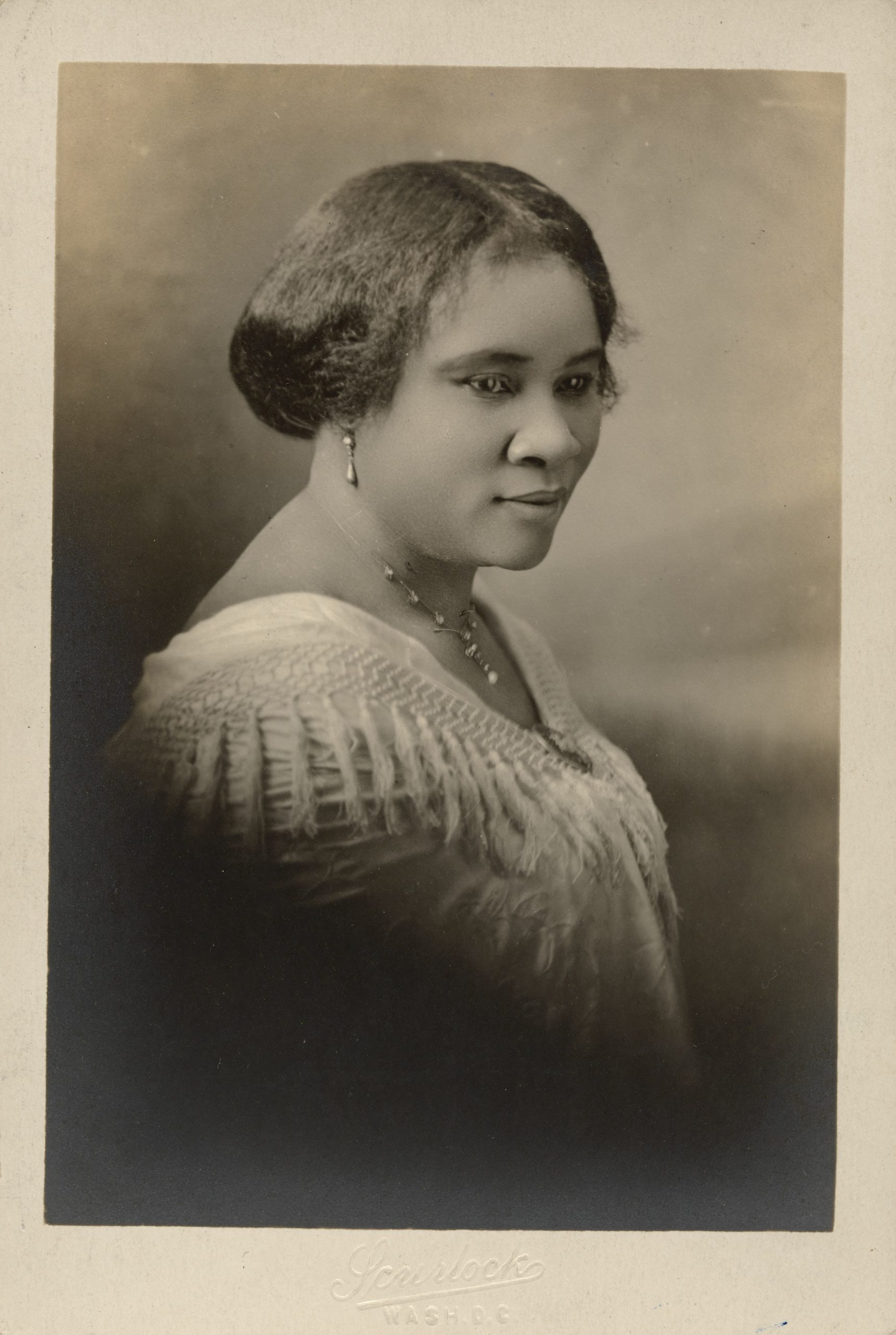 Madam C.J. Walker (1867–1919) was born as Sarah Breedlove into a slave family on a farm near the small Mississippi River town of Delta, Louisiana, opposite Vicksburg, Mississippi.

Sarah was the first member of her family to be born into freedom, following the 1863 Emancipation Proclamation.

Sarah’s mother died from cholera when the girl was only five years old. Her father followed her mother in death two years later, whereupon the young orphan moved across the Mississippi River to live with her older sister.

Right away, the seven-year-old girl began working as a domestic in order to pull her own financial weight in her sister’s family.

Later in life, Walker said she had only three months of formal education, which she received in a special literacy class organized by her church’s Sunday school program.

Sarah married for the first time in 1882, at the age of 14, in order to escape from the unwanted advances of her brother-in-law. Her daughter, Lelia, was born in 1885. Two years later, her husband died.

The next year, in 1888, Sarah moved to St. Louis, where three of her brothers lived. She found work as a laundress and, though she only earned one dollar a day, initially, she carefully set money aside for Lelia’s education.

Sarah suffered from a dermatological ailment of the scalp, which was exacerbated by the harsh hair care products available to black women at the time. She turned to her brothers, who worked as barbers, for advice on alternative products.

Single once again, Sarah began working on commission that same year as a sales agent for the Poro Company, which had been founded by an African American hair-care entrepreneur and millionaire named Annie Turnbo Malone.

Sarah was inspired by Malone’s products to begin experimenting with an improved line of products of her own.

In 1905, Sarah moved with her daughter to Denver, Colorado, where she continued to work for Malone and to develop her own product line. Eventually, Malone got wind of Sarah’s activities and accused her of stealing the formulas for her patented hair care products.

As Sarah’s hair care line began to take off, Malone would continue to be her main commercial rival for many years.

Initially, Madam Walker and her husband sold her products door to door. Soon, they embarked on a series of travels throughout the eastern and southern states to promote them.

Before long, Walker decided to expand into the mail-order business. She put A’Lelia in charge of that division of the growing company, freeing up her and her husband to continue traveling to promote the company’s products.

In 1908, Madam Walker, along with her daughter and husband, closed the Denver headquarters and relocated to Pittsburgh, Pennsylvania. In Pittsburgh, Walker opened a beauty parlor, as well as Lelia College of Beauty Culture.

The Lelia College taught the “Walker System,” primarily geared to the training of women who wished to join Walker’s national network of licensed sales agents. Part of Walker’s success was due to the reputation her sales agents enjoyed for earning sizable commissions.

In 1910, Walker relocated once again, this time to Indianapolis, Indiana, leaving A’Lelia in charge of the Pittsburgh operations.

In Indianapolis, Walker incorporated her company as the Madam C.J. Walker Manufacturing Company. The Walker Company opened a new hair salon and beauty school in the city, as well as a large, new manufacturing facility.

Charles Joseph Walker did not follow his wife to Indianapolis, and the couple divorced in 1912.

In 1917, Madam Walker hired Vertner Woodson Tandy, the first African American architect licensed in New York state, to build a mansion for her in Irvington-on-Hudson, then as now an exclusive commuter town north of New York City.

After her move to New York, during the last two years of her life, Walker became involved in public affairs, delivering a series of lectures on social, economic, and political issues at venues sponsored by black institutions.

During this period of her life, Walker became well-acquainted with other African American leaders of the time, such as Booker T. Washington, W.E.B. Du Bois, and Mary McLeod Bethune.

Walker also joined the executive committee of the National Association for the Advancement of Colored People (NAACP)’s New York chapter.

Trudeau, Suki, The Biography of Sarah Breedlove: And the Story of the Madame C.J. Walker Manufacturing Company (2017).