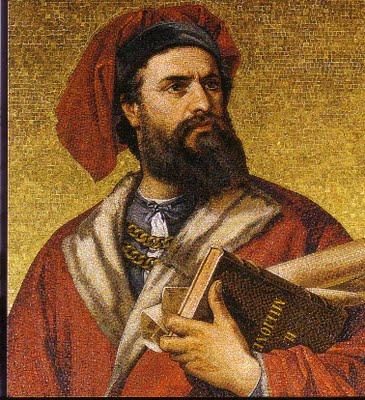 The Polo family were prosperous merchants whose business was originally focused on trade with the Near East.

Nothing is known of the provisions that must have been made for the young Marco’s education.

In 1254, Polo’s mother and father, as well as his father’s brother, were living in Constantinople. Due to political instability, it was decided to relocate the family. Polo’s mother, pregnant with the author, duly set sail for Venice.

However, Polo’s father and uncle decided to travel towards the east to seek out new trading opportunities. They traveled by camel caravan along the well-established, trans-Eurasian trading route known as the “Silk Road,” eventually making their way to what is now Beijing—to the court of Kublai Khan, the Mongol founder of the Chinese Yuan Dynasty.

The brothers returned home in 1269, after 15 years. Two years later, in 1271, they set off once again on a second expedition to China. This time, they took the 17-year-old Marco along with them.

Polo’s epoch-making journey to China lasted for 24 years. He left Venice in 1271 as a young man of 17 and returned home in 1295 as a wealthy merchant and respected citizen of the Venetian Republic. (The journey itself will be discussed below.)

When Polo returned home, the second Venetian-Genoese War (1294–1299) was raging at the time.

As a prominent Venetian citizen, Polo outfitted a military galley, which he commanded himself, to help with the war effort. We know that Polo was captured by the Republic of Genoa during a naval engagement.

In either case, it is tolerably well established that it was not until 1298 that Polo met his fellow-prisoner, Rustichello da Pisa, who would become the real author of the book that bears Marco Polo’s name.

Rustichello composed his work—ostensibly on the basis of stories he heard from Polo’s own lips while both were in prison in Genoa—in the northern Italian language known to modern scholars as “Franco-Italian.”

Rustichello’s original manuscript and its oldest copies have all perished, but around 150 copies in various languages are still extant. The oldest surviving manuscript is in Franco-Venetian and is dated 1300. It is titled Livre des Merveilles du Monde [Book of the Wonders of the World].

We have already seen that Polo arrived in the same prison in 1298. All in all, the most likely date for the composition of the now-lost original manuscript is 1298 or 1299.

In later centuries, the book became largely known under the more-descriptive title of “The Travels of Marco Polo” and similar variants. Oftentimes, Polo came to be listed as the sole author, with Rustichello’s crucial role as amanuensis entirely effaced.

In Italy, the book’s author came to be referred to casually as “Il Milione” [the Million], presumably from the immense number of wonders and treasures described in the book.

Polo was released from prison in 1299. He returned to Venice and, together with his uncle (his father having died the previous year), set himself up in business as a trader. The Polo-family business prospered even more than it had before.

In 1300, Polo got married and moved into the grand palazzo that his father and uncle had built in Venice during his journey.

Polo spent the rest of his life as a prominent and prosperous citizen of the Serene Republic.

Marco Polo’s significance does not lie in his priority. Not only did his own father and uncle travel to China before him, but other Europeans had been there before them, as well.

Nor is The Travels of Marco Polo significant for the preeminent quality of its historical and ethnographic reporting. Ibn Khaldūn’s great Muqaddimah [Introduction], written about a century after the Travels, puts Marco Polo in the shade in that respect.

Rather, The Travels of Marco Polo is primarily important for the way it fired the imagination of men and women in Europe beyond number, from the Middle Ages until the present day.

The document has, of course, been copiously studied by scholars. But it is striking that the scholarly editions, even today, are probably equaled, if not exceeded in number, by illustrated editions aimed at children.

The reason for this is simple: the true author of the work, Rustichello, was fundamentally a member of the budding “chivalric romance” tradition in literature, which was getting under way in Provence and elsewhere at this time.

The Travels of Marco Polo is, above all, an adventure narrative. It is chock full of good stories of eye- and mind-opening wonders. This is undoubtedly the main reason for the immense popularity of the work.

The “marvels” Polo reported were many and varied. Above all, he stressed the great wealth, as it appeared to him, that he saw everywhere in China, particularly in such exotic (to Europeans) products as silk and spices. He wrote that the Chinese enjoyed “all things in great abundance.”

Polo also delighted in recounting the unusual flora and fauna he observed in China, including elephants, monkeys, and crocodiles. In some cases, it is true, he failed adequately to distinguish between such unfamiliar creatures and the abundant dragons and other inventions of Chinese myth and legend that were recounted to him during his sojourn.

In one case, he assimilated an unfamiliar animal to a familiar European myth, referring to the Asian rhinoceros as a “unicorn.”

Polo also reported the impressive social institutions that China had developed, including a state bureaucracy, a well-kept network of roads and bridges, and even a postal system far in advance of anything to be found in Europe at the time.

Moreover, among most readers’ favorite passages in the book were Polo’s elaborate descriptions of Kublai Khan’s magnificent summer and winters palaces at “Xanadu” (Shangdu, in present-day Inner Mongolia) and “Cambaluc” (Khanbaliq, modern Beijing).

Polo also provided detailed descriptions of Chinese technology—which we know was quite advanced by European standards—for example, their advanced shipbuilding techniques, including watertight bulkhead partitions between compartments below decks.

Nor did Polo neglect to paint a picture of the texture of the daily life of the Chinese people, including articles of everyday use unknown in Europe, such as paper books and eyeglasses.

Almost from the beginning, some of Polo’s European readers were skeptical about the truth of his reports of such “wonders.” Some modern scholars, too, noting the absence of this or that item from the list of Chinese innovations now known to us, have doubted his truthfulness.

However, the consensus of modern scholarship seems to be that Polo’s account is broadly accurate and that he did in fact visit the places he claims to have seen.

Arguments in favor of Polo’s bona fides are varied. They include many claims—from the kinds of currency in circulation to the detailed description of such things as salt production techniques and the procurement of government revenues—which could not have become known to a European at that time in any other way than by visiting China.

As for Polo himself, when asked on his deathbed what he had to say to his those who accused him of lying, he replied:

I did not tell half of what I saw.

Perhaps more important than the book’s veracity, or even its popularity, though, is the way it educates and expands the mental horizons of its readers.

The Travels treats the Chinese people with respect. Polo marvels at the differences between the “manners” (customs) of the Yuan Dynasty Chinese and medieval Europeans like himself.

But Polo is also at pains to communicates the underlying shared humanity of the Chinese people he lived and worked among for so many years.

Liu, Xinru, The Silk Roads: A Brief History with Documents(2012).