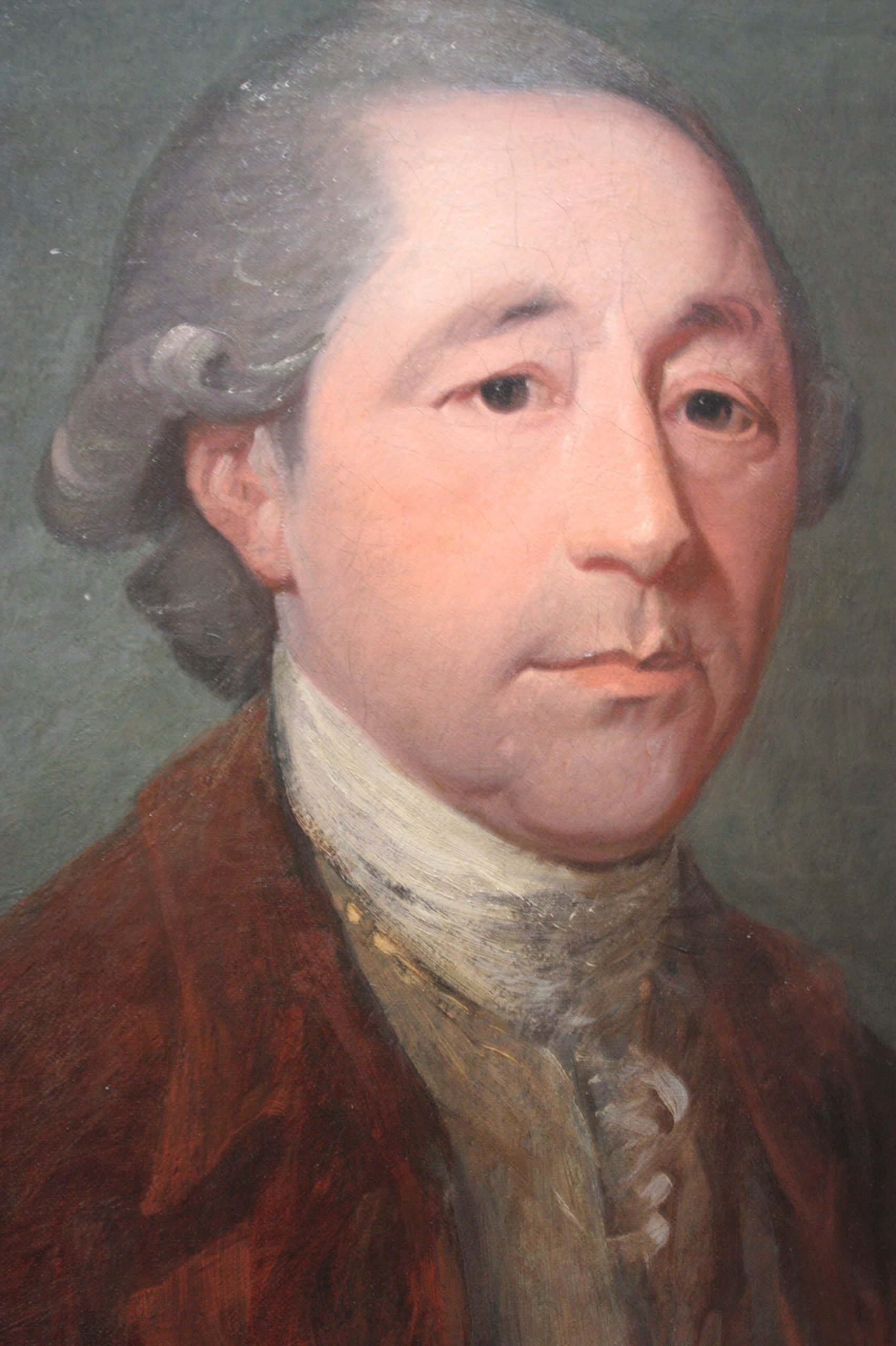 Matthew Boulton (1728–1809) was born in Birmingham in the English industrial Midlands.

Boulton’s family had been long established in nearby Lichfield, about 20 miles north of Birmingham. One of his ancestors, six generations back, had been Chancellor of Lichfield. Lichfield’s chief claim to fame, however, is as the birthplace of Samuel Johnson.

Boulton’s father, also named Matthew, moved from Lichfield to Birmingham to serve an apprenticeship in the manufacturing trade. He eventually established his own factory for the production of small metallic objects, such as buttons, buckles, cane heads, and snuff boxes, among others.

By the time of the younger Matthew’s birth, the Boulton family were quite affluent. The boy was educated in a private school in Birmingham.

Young Matthew left school at the age of 15 to join his father’s business. Two years later, he invented a new kind of belt buckle with an enamel inlay that became fashionable and made a lot of money for the family concern.

In 1749, Boulton senior made his son a partner in the family firm. Though only 21 years old, the young man proved himself to be a capable manager and soon took over the bulk of the responsibility for running the business.

The elder Boulton stepped down from management of the firm altogether in 1757, when the younger Matthew was just 29 years old. He died two years later.

With time, as the family business flourished, Boulton found himself increasingly on the road promoting his products and negotiating deals. Much of his time was spent in London.

Ever the alert businessman, Boulton arranged through connections he made in London to have swords he had manufactured presented as gifts to two royal princes, one of whom was the Prince of Wales, who was soon to become King George III.

In 1765, Boulton opened a larger and technologically up-to-date factory on the outskirts of Birmingham. The factory, which contained the most-advanced metalworking equipment then in existence, was widely admired as a wonder of modern industry.

Boulton used the improved capabilities of his new factory to diversify the range of objects he produced. More specifically, he began to cater to more-affluent customers, selling items made from silver, such as plate (dinnerware), candlesticks, and ceremonial chalices, flagons, tankards, and loving cups.

Boulton also branched out into expensive items such as boxes, chests, clocks, candelabra, and statuary cast in ormolu—formerly, an exclusively French craft. In 1771, he even participated in annual sales at the famous, high-end auction house, Christie’s, for a couple of seasons.

Boulton’s factory was originally powered by a waterwheel mounted on an adjacent millstream. Boulton became acutely conscious that his ability to expand the productive capacity pf his factory was limited by this fixed source of power.

In 1765, James Watt had had the insight that enabled him eventually to build a new type of double-acting steam engine exhibiting many important innovations, including parallel motion linkage connecting the twin cylinders to the external pump, a rocking beam, a throttle, and a centrifugal governor.

It took Watt several years to bring his idea to fruition, but once it was perfected, the new Watt steam engine represented an enormous improvement over Thomas Newcomen‘s engine invented in 1712. For one thing, the Watt engine consumed one-fifth the amount of fuel compared to the Newcomen engine.

Boulton first wrote to Watt in 1866, inquiring into the possibility of acquiring the new engine he was widely rumored to be working on. A correspondence followed, which blossomed into a close business partnership over the next several years.

Watt had been fighting both technical and financial and legal difficulties for almost a decade. All of these problems were finally resolved by 1775, when he was finally able to obtain a patent for his inventions.

Boulton and Watt formed a legal partnership that same year, Boulton & Watt. Boulton was able to provide Watt with access to technical resources, while Watt provided Boulton with a greatly expanded source of power for his factories.

In 1776, the new company began selling the Watt engine. In the beginning, there were still kinks that needed to be worked out, especially the tendence of the engine to explode.

At first, most sales of the machines were made to mining operations for the pumping of water. However, as engines for this purpose proved to be highly successful and popular, by the late 1780s and early ‘90s the Watt engine began to be applied to other purposes.

Watt was heavily engaged in adapting his engine for service in everything from textile mills to breweries, while Boulton remained preoccupied with spreading the firm’s reputation far and wide to drum up new business.

By 1800, Boulton & Watt had produced some 450 steam engines for all purposes. James Boswell reported that Boulton once said to him:

I sell here, sir, what all the world desires to have—POWER!

Boulton’s last great commercial coup occurred in 1786, when he secured the right to manufacture copper coinage for the British Crown. Stamped using steam-powered equipment, the coins produced by Boulton beginning two years later, in 1788, were immediately recognizable for their uniformity and perfect roundness.

The factory where Boulton & Watt stamped these coins became known as the “Soho mint,” after the neighborhood of Birmingham in which it was located.

Finally, one may obtain no little insight into Boulton’s character from knowing that he was a key figure in the Lunar Society of Birmingham, a group of like-minded entrepreneurs, scientists, and philosophers living in the vicinity of Birmingham, who were in the habit of meeting by the light of the full moon every month in a member’s home to discuss philosophical, economic, and political matters.

Often referred to as the “Birmingham Enlightenment,” or even the “Industrial Enlightenment,” and functioning on and off from around 1765 until about 1791, the Lunar Society consisted of some of the best-known writers and public figures in England at that time.

It may be noted in passing that Erasmus Darwin was Charles Darwin’s grandfather, while Josiah Wedgwood was his father-in-law. Such was the insular world of eighteenth-century British science and industry.

Selected Books about Boulton and the Steam Engine

Clay, Richard, Matthew Boulton and the Art of Making Money (2009).

Doty, Richard, Soho Mint and the Industrialization of Money (1998).

Hannavy, John, The Governor: Controlling the Power of Steam Machines (2022).

Hills, Richard L., Power from Steam: A History of the Stationary Steam Engine (1989).

Rosen, William, The Most Powerful Idea in the World: A Story of Steam, Industry, and Invention (2010).

Schofield, Robert E., The Lunar Society of Birmingham: A Social History of Provincial Science and Industry in Eighteenth-Century England (1963).

Smiles, Samuel, Lives of Boulton and Watt, Principally from the Original Soho Mass., Comprising also a History of the Invention and Introduction of the Steam-Engine (1865).