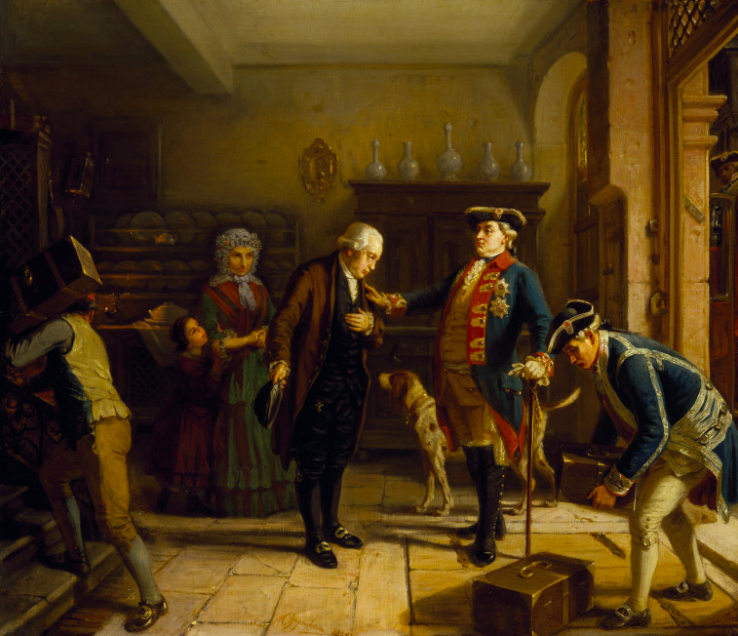 Mayer Amschel Rothschild (1744–1812) was born into an affluent family living in the Jewish ghetto of Frankfurt, which at that time was a part of the Holy Roman Empire and is now in Germany.

Rothschild’s paternal family was originally named “Bacharach.” The family changed its name to “Rothschild” in 1577, either in recognition of having received a coat-of-arms or in reference to a sign designating the ancestral home. (The German words “rothe schild” can mean either “red shield” or “red sign.”)

Rothschild’s father traded in various goods, as well as dealing in currency exchange. He developed a business relationship supplying coins to the Prince of Hesse (now Hessen), the state (Land) of which Frankfurt is the capital.

Between 1757 and 1763, the young Rothschild worked as an apprentice with the banking firm of Simon Wolf Oppenheimer in Hanover (Hannover). Simon Wolf’s grandson worked closely with the teenager, teaching him the basics of foreign trade and currency exchange.

Upon returning to Frankfurt in 1763, Rothschild joined the family firm, following in his father’s footsteps in supplying coins to the Crown Prince of Hesse. In 1769, Rothschild was granted the title of Hoffaktor [“Court Factor“] of Hesse.

The French Revolution was especially lucrative for Rothschild, as his firm was appointed by the British government to its handle payments to Hessian mercenaries

By the early nineteenth century, Rothschild’s business had expanded into the core function of modern banking, namely, providing loans.

In 1803, the Landgrave became Prince-Elector of Hesse. During the Napoleonic Wars, the already-close relationship between the Prince-Elector and Rothschild became even close, when the prince called upon the banker to help him hide his wealth from the invading French forces. The Prince-Elector himself fled abroad.

One of Rothschild’s sons had established a branch of the family’s banking business in London in 1798, which facilitated the financial maneuverings that Rothschild made on the Prince-Elector’s behalf.

After the withdrawal of the French troops, the Prince-Elector returned to Frankfurt. His gratitude to Rothschild helped to strengthen their business relationship still further.

Rothschild, for his part, used the Prince-Elector’s wealth while it was at his disposal to increase his own fortune several times over. It was at this point that he became internationally known as one of the richest and most powerful men in Europe.

Through his children and children’s children, many of whom followed in his footsteps in the family business, Rothschild became the founder of a veritable banking dynasty, with significant branches of the family present in London, Paris, Vienna, and Naples, as well as Frankfurt.

Among Rothschild’s many heirs, the two most prominent as bankers were undoubtedly his sons, Nathan Mayer Rothschild, based in London, and James Mayer de Rothschild, in Paris.

Mayer Amschel Rothschild has been called the “founding father of international finance.”

Cowles, Virginia, The Rothschilds: A Family of Fortune (1973).

Elon, Amos, Founder: A Portrait of the First Rothschild and His Time (1996).

Garten, Jeffrey E., From Silk to Silicon: The Story of Globalization Through Ten Extraordinary Lives (2016).

Muhlstein, Anka, Baron James: The Rise of the French Rothschilds (1983).

Reeves, John, The Rothschilds: The Financial Rulers of Nations (1887).

Simmons, Michael W., The Rothschilds: The Dynasty and the Legacy (2017).