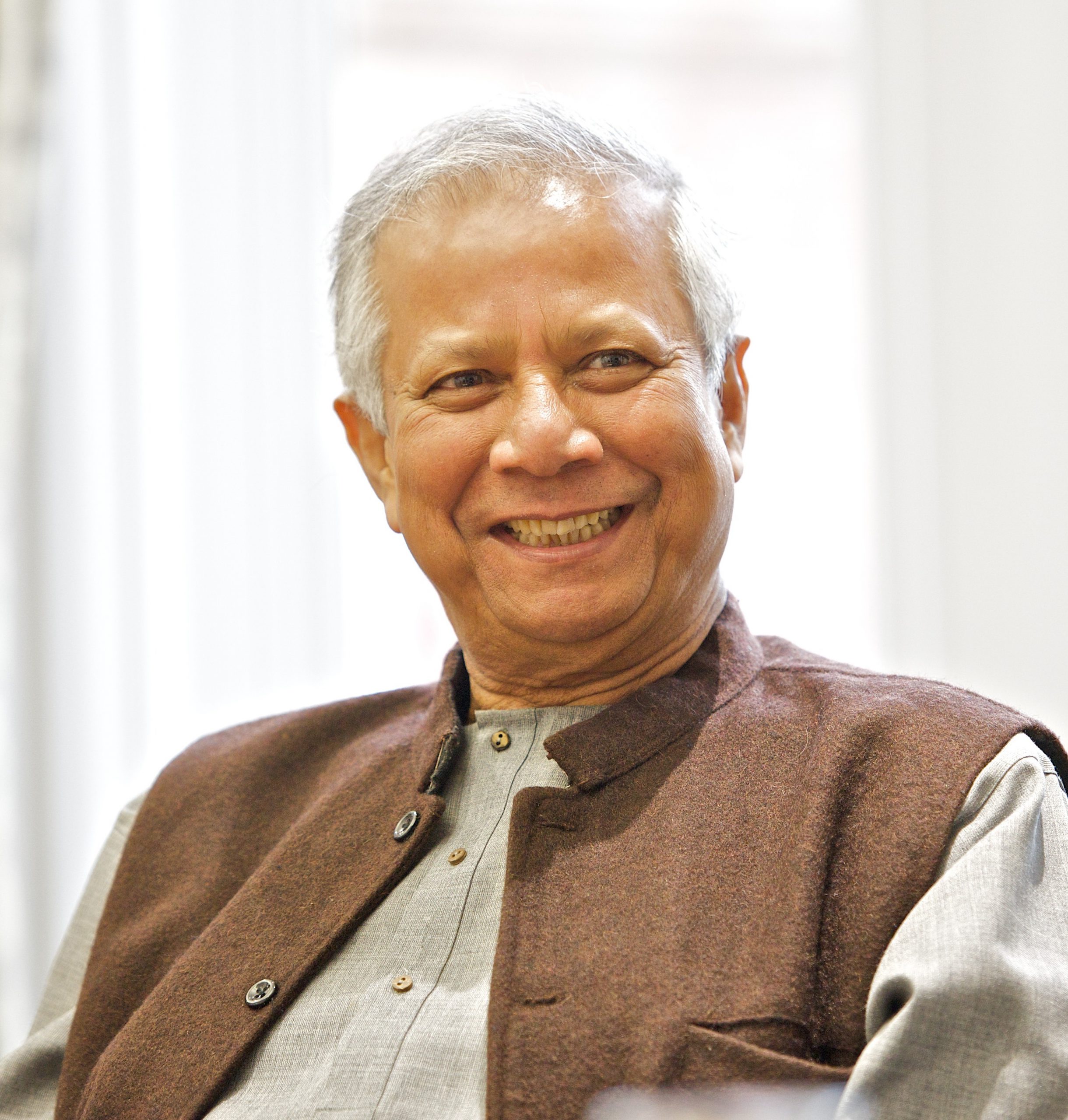 Muhammad Yunus (b. 1940) was born in the village of Bathua, on the northern outskirts of Chittagong, the second-largest city in what was then East Bengal, a part of British Imperial India. Yunus’s father was a jeweler.

Yunus’s family were Bengali-speaking Muslims, like the majority of the population of East Bengal.

In 1947, British Imperial India was partitioned into two independent countries based on the religion of the majority of the population: a Hindu state (India) and a Muslim state (Pakistan). Pakistan was divided into two geographic regions, West and East Pakistan, separated by more than 1000 miles.

Thus, in 1947, at age seven, Yunus became a citizen of East Pakistan.

In 1971, Bengali-dominated East Pakistan fought a victorious war against Urdu-dominated West Pakistan to establish its independence from their political union. When the war was over, East Pakistan declared itself the new nation of Bangladesh—and Yunus, at the age of 31, acquired his third national allegiance.

Yunus spent his early childhood in his native village. In 1944, when he was four years old, his family moved into nearby Chittagong—a city situated on the southeastern shore of the Bay of Bengal. Today, Chittagong is a metropolis consisting of some five million inhabitants.

An excellent student, Yunus was accepted by Chittagong Collegiate School, a public, elite secondary school, which was considered one of the best such schools in the country.

During his high school years, Yunus became active in the International Boy Scout movement, traveling under its auspices to meetings in West Pakistan, India, and Canada, as well as in his native East Pakistan.

In 1957, Yunus signed up to study economics at the University of Dhaka, East Pakistan’s capital and largest city.

Immediately upon obtaining his master’s degree in 1961, Yunus went to work for the East Pakistan government, in the Bureau of Economics.

There, Yunus worked briefly as a research assistant for Nurul Islam and Rehman Sobhan, both Bengali-Muslim economists with an international reputation. Sobhan would go on to play an influential role in the political movement that led to the war of independence from West Pakistan and the creation of Bangladesh in 1971.

Later in 1961, Yunus left government work to take up a permanent position at Chittagong College (not to be confused with his alma mater, Chittagong Collegiate School), where he taught until 1965.

During this period, Yunus also founded a packaging factory, which became a profitable enterprise.

In 1965, Yunus traveled to the US on a Fulbright Scholarship. There, he entered a doctoral program in economics at Vanderbilt University in Nashville, Tennessee, receiving his PhD from Vanderbilt’s Graduate Program in Economic Development in 1971.

While still in graduate school, Yunus obtained a position at Middle Tennessee State University in Murfreesboro, Tennessee, where he taught from 1969 until 1972.

In 1971, during the war of independence leading to the creation of Bangladesh, Yunus became politically active. He engaged in fund-raising activities in the US on behalf of the war effort and published the Bangladesh Newsletter out of his home in Nashville.

When Yunus returned home in 1972, he obtained a job working for the new government of Bangladesh on its Planning Commission, which was headed by his old mentor Nurul Islam.

In 1974, Yunus resigned his government position to accept a job offer from the University of Chittagong to teach in its economics department.

That same year, Bangladesh suffered a severe famine. As a result, Yunus became deeply involved in a variety of government-run projects aimed at the short-term alleviation of the famine, as well as the long-term development of the rural hinterlands. At the time, Bangladesh was one of the poorest nations on earth.

Out of this work came the idea of microlending, or microfinance, for which Yunus became famous (see “Yunus’s Ideas” below).

In 1983, Yunus founded Grameen Bank [“Village Bank”], which was dedicated by its charter to the business model of microlending, which Yunus had earlier demonstrated could be profitable.

In 2006, Yunus and the Grameen Bank he created won the Nobel Peace Prize for their efforts towards the alleviation of poverty in the developing world.

As already noted, it was in the context of the famine of 1974–1975 in Bangladesh that Yunus had the idea of microfinance for which he became internationally celebrated and won the Nobel Peace Prize. This happened as follows.

During a fact-finding mission related to the famine, Yunus visited a very poor village not far from Chittagong, where he learned about a case, which illustrated how even a very small amount of capital could make a large difference to the life of an impoverished villager. The problem, though, was getting access to such capital on reasonable terms.

Specifically, he heard about a group of village women who had the idea of making bamboo furniture by hand, a much more remunerative enterprise than farming.

However, in order to purchase the initial and subsequent supplies of bamboo, they needed a small amount of capital. Unfortunately, the women had no savings and no ordinary commercial bank was willing to lend to them.

Therefore, the women were forced to turn to an unscrupulous moneylender who charged them an exorbitant interest rate for supplying them with the capital they required to operate their small business.

The women’s interest payments to the moneylender made it impossible for them to put their business onto a sound financial footing. Yunus realized that if they had had access to small loans at a normal interest rate, their business could have flourished.

After hearing of this case, Yunus decided to create a lending institution dedicated to making very small loans (“microloans”) to the poor in the villages.

Other economists and bankers Yunus discussed his idea with dismissed it, saying that the villagers would be unable to provide collateral, without which they would lack the incentive to repay their loans. Moreover, the upper-class professors and businessmen felt that villagers were irresponsible and would simply fritter away the money that was lent to them.

Yunus believed otherwise. To test his idea, in 1976, he founded his first experimental banking venture to make microloans to the poorest of the poor in the villages.

However, Yunus did decide—in a partial concession to his colleagues’ warnings—to make it a policy to lend money only to village women. The reason was that he was afraid the men would indeed behave irresponsibly, whereas village women had a reputation for managing their households well and for entrepreneurship.

After several years of operating the experimental bank, Yunus found that the vast majority of the village women who received loans were in fact using the money to improve their financial condition and were able to repay their loans on schedule.

In 1983, Yunus received an official charter from the government of Bangladesh to open his Grameen Bank.

Both Yunus’s concept and his bank caught the imagination of the world. Within a relatively short time, the idea of microfinance began to be implemented in other countries throughout the developing world. Today, microfinance is a thriving academic industry, as well.

While the concept of microfinance in general, and Grameen Bank in particarl, have attracted some vociferous critics, the academic consensus seems to be that Yunus has added a valuable new weapon in the struggle against global poverty.

Banker to the Poor: The Autobiography of Muhammad Yunus, Founder of the Grameen Bank, with Alan Jolis (1998).

Creating a World Without Poverty: Social Business and the Future of Capitalism, with Karl Weber (2007).

Selected Works About Yunus and Microfinance

Armendáriz, Beatriz and Marc Labie, eds., The Handbook of Microfinance (2011).

Bornstein, David, The Price of a Dream: the Story of the Grameen Bank the Idea That is Helping the Poor to Change Their Lives (1996).

Fitzgerald, Marilyn A., If I Had a Water Buffalo: How to Microfinance Sustainable Futures (2013).

Karim, Lamia, Microfinance and Its Discontents: Women in Debt in Bangladesh (2011).

Rhyne, Elisabeth, Microfinance for Bankers and Investors: Understanding the Opportunities and Challenges of the Market at the Bottom of the Pyramid (2009).

Roodman, David, Due Diligence: An Impertinent Inquiry into Microfinance (2011).

Roy, Ananya, Poverty Capital: Microfinance and the Making of Development (2010).

Rutherford, Stuart and Sukhwinder Arora, eds., The Poor and their Money: Microfinance from a Twenty-First Century Consumer’s Perspective (2009).

Sinclair, Hugh, Confessions of a Microfinance Heretic: How Microlending Lost Its Way and Betrayed the Poor(2012).

Wahlen, Samuel, Microfinance: An Economic Analysis of Banking to the Poor (2017).

Watkins, Todd A., Introduction to Microfinance (2018).