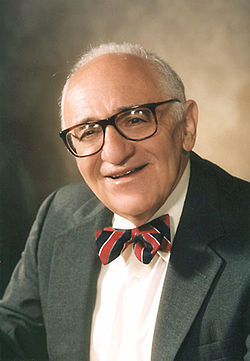 Murray N. Rothbard (1926–1995) was born in the Bronx, New York City, into a Jewish immigrant family. His father, who worked as a chemist, was originally from Poland, while his mother hailed from Russia.

Rothbard has stated that he grew up as the only “right-winger” on his block, among his mostly socialist- and communist-sympathizing neighbors. A member of the New York Young Republican Club, he credited his father with instilling in him an admiration for the American ideal of individual effort, private property, free enterprise, and minimal government, saying that at an early age he came to regard socialism as “monstrously coercive and abhorrent.”

Rothbard was educated in private schools in New York City, then attended Columbia University where he obtained his bachelor’s degree in mathematics in 1945.

Rothbard remained at Columbia for graduate school but switched his major to economics. Due to a personal conflict with Columbia Economic Department professor Arthur Burns, his PhD dissertation was originally rejected. However, after Burns left the Columbia faculty to join President Dwight D. Eisenhower’s Council of Economic Advisers, Rothbard resubmitted his dissertation. This time it was accepted, and he received his PhD in 1956.

Rothbard has said that almost all his fellow Columbia graduate students were “extreme leftists” and that there was only one other registered Republican there besides himself.

During the early 1950s, Rothbard attended private seminars held by Ludwig von Mises, who was then teaching at New York University’s Stern School of Business. He also read Mises’s magnum opus, Human Action (originally published in 1949), around this same time. Rothbard has stated that the book strongly influenced the development of his own views on philosophical anthropology and political economy.

During this same period, as well, Rothbard became friends with the conservative American thinker and author, Frank Chodorov, author of the remarkably titled book, The Income Tax: Root of All Evil (published in 1954). Rothbard also read widely at this time in the works of such earlier American free market– and limited-government-oriented thinkers as Lysander Spooner, Albert Jay Nock, Isabel Paterson, H.L. Mencken, and others.

By the early 1950s, Rothbard was no longer a student, but had not yet officially received his PhD. He was therefore not in a good position to find a regular teaching position. Luckily, he was able to find an alternative way of earning a living by working for the William Volker Fund, which supported him for the next ten years.

The Volker Fund had been founded by in 1932 in Kansas City, MO, by the German-born business magnate, William Volker, who earned his fortune in the home furnishings industry. Originally established by Volker as a charity to help the poor and the unemployed at the height of the Great Depression, the Fund evolved over the years into something similar to what we now call a political action committee. Its primary goal was to help clean up Missouri’s notoriously corrupt, “machine”-dominated, big city politics, such as the notorious “Pendergast machine,” named for Democratic Party boss Thomas J. Pendergast, who ruled Kansas City for nearly 15 years with an iron fist.

By the 1950s, the Volker Fund was one of the very few well-heeled charitable organizations in the country that supported individuals and groups representing the conservative side of the political spectrum.

Beginning in 1952, the Volker Fund supported Rothbard by paying him a retainer for his work as a “senior analyst.” One of the most-important projects he was assigned during this time was to write a detailed commentary on Mises’s Human Action.

Rothbard’s remit was to produce a book that would be more accessible to the general reading public than Mises’s original tome, as well as something that could serve as an introductory textbook for undergraduate college students—thus correcting, at least to some extent, the skewed economic views presented by the Keynesian and socialist works which were the only textbooks available at the time.

In 1962, Rothbard published Man, Economy, and State. Mises himself voiced his approval of the book.

Unfortunately for Rothbard, the Volker Fund went out of business that same year, 1962. After several years of fruitless job-hunting, Rothbard (who now had his PhD) finally landed his first regular teaching position as a part-time economics instructor at the Brooklyn Polytechnic Institute. The year was 1966 and Rothbard was 40 years old.

Rothbard taught at the Brooklyn Polytechnic for 20 years. During this time, he published many books, while also engaging in institution-building. In 1976 he founded the Center for Libertarian Studies, which was the original publisher of the Journal of Libertarian Studies.

In 1982, Rothbard co-founded (with Llewellyn H. Rockwell, Jr.) the Ludwig von Mises Institute (MI) in Auburn, Alabama, which is today the flagship institution of the libertarian movement. MI assumed the publication of the Journal of Libertarian Studies and today also publishes the more-technical Review of Austrian Economics.

In 1986, Rothbard left New York to become the S.J. Hall Distinguished Professor of Economics at the Lee Business School of the University of Nevada, Las Vegas (UNLV).

Rothbard’s years at UNLV were highly productive. He taught several students who would go on to establish distinguished careers, notably Hans-Hermann Hoppe. He also wrote many books, and even left several essentially completed manuscripts upon his death. Several of these were later edited by other prominent libertarian scholars and published posthumously.

To these common principles, Rothbard added a characteristic concern with international peace and a critique of the close relationship between big government and the military-industrial complex. He saw a deep-seated complicity between overweening government’s power to distort the domestic economy and its engagement in foreign wars of aggression

Rothbard’s critique of government was also based on a somewhat different set of philosophical principles, for which the term “anarcho-capitalist” is probably more accurate than the term “libertarian.”

Finally, Rothbard worked hard to write in a style that was accessible to the general reader. For this reason, his works may appear to lack some of the sophistication of the works of Mises and Friedrich A. Hayek. However, what they lose in philosophical depth, they gain in lucidity and readability. In short, the works of Rothbard provide an excellent introduction to the more-challenging works of the older Austrian economists.

Rothbard also wrote several important economic analyses of specific historical incidents, such as the Great Depression. The most important of his historical works, however, was his two-volume investigation of the history of libertarian ideas, An Austrian Perspective on the History of Economic Thought, published in 1995—the last year of his life. In this great work, Rothbard was one of the first to substantiate the major contribution to economic thought of the Salamanca School in the sixteenth century.

Economic Depressions: Their Cause and Cure (1969).

Power and Market: Government and the Economy (1970).

For a New Liberty: The Libertarian Manifesto (1973).

Egalitarianism as a Revolt Against Nature and Other Essays (1974).

An Austrian Perspective on the History of Economic Thought (two volumes) (1995).

A History of Money and Banking in the United States: The Colonial Era to World War II, edited by Joseph T. Salerno (2002).

Rockwell, Llewellyn H., Jr., Against the Left: A Rothbardian Libertarianism (2019).