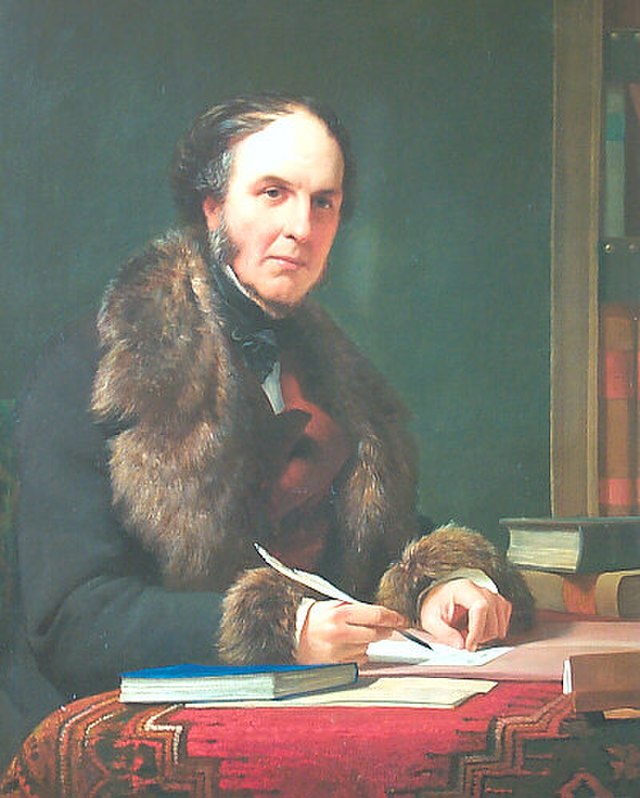 Nassau William Senior (1790–1864) was born in the village of Compton in Berkshire County in the UK, about halfway between Reading and Oxford. (Note that “Senior” is used here as a surname, not a suffix.) His father was a minister of the Church of England.

While at Oxford, Senior was befriended by Richard Whately—a famous philosopher, logician, economist, author, and Anglican prelate, who eventually became the Archbishop of Dublin. Senior engaged Whately for a time as a private tutor. The two men remained lifelong friends.

Senior took his bachelor’s degree in civil law from Magdalen College in 1811. He then received a prestigious scholarship which allowed him to pursue higher legal studies.

In 1816, Senior became a “pupil” (apprentice) in a private law firm, eventually qualifying as a lawyer in 1819.

However, Senior only practiced the law briefly. In 1825, he returned to Oxford, this time as the first tenant of a new chair in political economy, which he occupied until 1830, and once again years later, from 1847 until 1852.

Beginning in the late 1920s, Senior began to produce a steady stream of books, pamphlets, and articles for such prominent journals of his day as the Quarterly Review, the Edinburgh Review, the London Review, and the North British Review.

As Senior’s writings brought him to public attention, the then-governing Whig Party began to take an interest in him, eventually tapping him as an official adviser.

Senior served on several Whig government committees, playing a leading role in the drafting of the New Poor Law of 1834 and of a report on the attempted organization of the hand-weaving industry by the trade union movement that was issued in 1841.

Many of Senior’s writings were translated into French and other languages. As a result, he received invitations to travel to various conferences abroad, where he became acquainted with many of the leading economists, political thinkers, and statesmen of his day.

Among Senior’s many overseas connections was the distinguished French political thinker and author, Alexis de Tocqueville, author of Democracy in America, with whom he formed a close friendship.

Senior stoutly maintained that economics was a fact-based science and that no political policies can or should be inferred directly from economic facts.

Senior’s basic orientation was classical liberalism in the tradition of Adam Smith, Jean-Baptiste Say, and David Ricardo. His main contributions were in the nature of fine-tuning of the specific doctrines of those authors as inferred from their general principles.

Senior is perhaps best known for his willingness to speak his mind on controversial public issues and to take unpopular positions.

For example, he stoutly maintained that the Poor Laws—which mandated work in government-run institutions for the otherwise unemployed—contributed to the overall well-being of the populace because they improved the industriousness of the poor

An Introductory Lecture on Political Economy (1827).

Three Lectures on the Transmission of the Precious Metals from Country to Country and the Mercantile Theory of Wealth (1828).

Two Lectures on Population, with a Correspondence between the Author and Malthus (1829).

Three Lectures on the Cost of Obtaining Money, and on Some Effects of Private and Government Paper Money(1830).

Statement of the Provision for the Poor, and of the Condition of the Labouring Classes, in a Considerable Portion of America and Europe(1835).

On National Property, and on the Prospects of the Present Administration and of Their Successors(1835).

An Outline of the Science of Political Economy (1836).

Letters on the Factory Act, As It Affects the Cotton Manufacture (1837).

Remarks on the Opposition to the Poor Law Amendment Bill (1841).

Conversations with M. Thiers, M. Guizot, and Other Distinguished Persons, During the Second Empire, edited by Mary Charlotte Mair Simpson (1878).

Taussig, Frank W., Wages and Capital: An Examination of the Wages Fund Doctrine (1896).