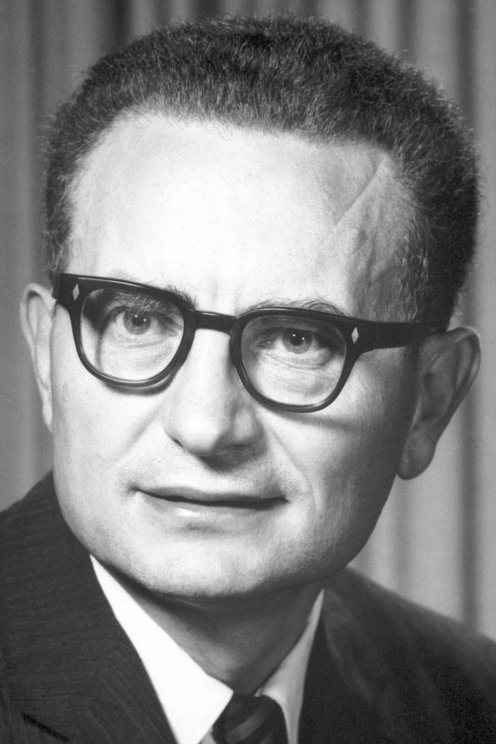 Paul Anthony Samuelson (1915–2009) was born in Gary, Indiana, into a Polish-Jewish family who had recently arrived, along with tens of thousands of other Eastern European immigrants, to work in that city’s then-booming steel industry.

Samuelson’s own father, however, was a pharmacist.

In 1923, Samuelson’s family moved to the Chicago neighborhood of Hyde Park, where he attended the public schools.

In 1931, at the age of 16, Samuelson entered the nearby University of Chicago, where he received his bachelor’s degree in economics 1935.

Samuelson’s doctoral dissertation, entitled “Foundations of Analytical Economics,” was recognized as the best Harvard dissertation in economics written during his graduating year. It was published in 1947 as Foundations of Economic Analysis (see “Selected Works Authored or Co-authored by Samuelson” below).

In 1940, Samuelson was appointed an assistant professor of economics by the Massachusetts Institute of Technology (MIT), just down the road from Harvard, at the opposite end of Massachusetts Avenue in Cambridge.

Samuelson remained at MIT for his entire career, apart from sabbatical years as a Guggenheim Fellow during 1948–1949 and as a visiting professor at Trinity University in San Antonio, Texas, in the spring of 1989.

In 1945, Samuelson obtained a joint appointment as Professor of International Economic Relations with the Fletcher School of Law and Diplomacy at Tufts University in Medford, Massachusetts.

In 1947, Samuelson won the John Bates Clark Medal, which is awarded to the best American economist under the age of 40.

In 1947, Samuelson was promoted to the position of full Professor of Economics at MIT. In 1962, he was appointed Institute Professor.

In 1948, Samuelson published the first edition of his textbook, Economics: An Introductory Analysis (see below). This volume became the most successful economics textbook ever written, dominating the field for decades. While the competition in economics texts is much fiercer today, Samuelson’s is still in print—now in Its twentieth edition, published in 2019. Overall, the book has sold more than four million copies and has been translated into some 40 languages.

While Samuelson’s early work was highly technical, employing mathematics borrowed from the physical theory of thermodynamics to explain the phenomenon of general economic equilibrium, his career as a whole is perhaps best viewed as that of a generalist who contributed to a wide variety of fields of economics.

Samuelson also played an important role as a teacher. His growing influence over the course of his career was due in no small part to the remarkable success of his 1948 textbook and its subsequent editions, by means of which several generations of American economists were taught to view the discipline through the lens of the teachings of John Maynard Keynes.

Samuelson’s influence was also very considerable in the halls of government. Indeed, he may be seen as one of the principal apologists of what became, in no small measure to his efforts, the Keynesian consensus of all the Western industrialized democracies in the aftermath of World War II.

Finally, Samuelson achieved am unusual level of analytical clarity in his writings, which combined technical sophistication with relative accessibility. Thus, the selection committee of the Nobel Memorial Prize in Economic Sciences stated that it recognized him for contributing “to raising the level of analysis in economic science.”

More specifically, in the area of general finance, Samuelson was one of the first to give the “efficient-market hypothesis” its modern form.

In the field of public finance, Samuelson made important contributions to the theory of the most-efficient theory of public-goods allocation.

With respect to the field of international economics, Samuelson came up with the idea now known as the “Balassa–Samuelson hypothesis,” which states that the so-called “Penn effect”—the tendency for consumer prices in wealthier countries to be systematically higher than those in poorer countries—can be explained by the productivity difference between more-developed and less-developed countries in the traded goods’ sectors, which in turn affects wages and prices in other sectors.

Finally, in the field of macroeconomics, Samuelson helped develop the “overlapping generations model,” which introduced variable effects related to the human life cycle into the theory of macroeconomic dynamics and growth.

“Efficient Paths of Capital Accumulation in Terms of the Calculus of Variations,” in Kenneth J. Arrow, Samuel Karlin, and Patrick Suppes, eds., Mathematical Models in the Social Sciences, 1959: Proceedings of the First Stanford Symposium. Stanford, CA: Stanford University Press; pp. 77–88 (out of print) (1960).

Economics from the Heart: A Samuelson Sampler, edited by Maryann O. Keating (1983).

Trade, stability, and Macroeconomics: Essays in Honor of Lloyd A. Metzler, with George Horwich (1974).

Inside the Economist’s Mind: Conversations with Eminent Economists, with William A. Barnett (2006).

Kurz, Heinz, ed., The Theory of Value and Distribution in Economics: Discussions between Pierangelo Garegnani and Paul Samuelson (2012).

Puttaswamaiah, K., Paul Samuelson and the Foundations of Modern Economics (2001).

Szenberg, Michael, Aron Gottesman, and Lall Ramrattan, Paul Samuelson: On Being an Economist (2005).

Wapshott, Nicholas, Samuelson Friedman: The Battle over the Free Market (2021).