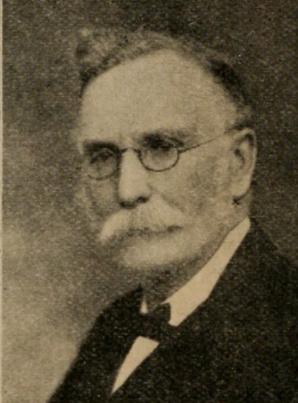 Philip Henry Wicksteed (1844–1927) was born in Leeds, UK, a city in the industrial English Midlands.

Wicksteed was the son and grandson of “nonconformist” or “dissenting” (i.e., non-Anglican Protestant) ministers. His mother’s side of the family consisted of affluent merchants and businessmen.

Wicksteed’s social milieu was politically progressive. For example, one of his mother’s brothers, yet another nonconformist minister, was an early supporter of universal suffrage.

Wicksteed was educated at University College, London, and at Manchester New College, one of the principal seminaries for nonconformist ministers. In 1867, he received his master’s degree in classics.

The same year, in 1867, Wicksteed followed in his family’s tradition, becoming ordained as a Unitarian minister. He then received an appointment as vicar of Mill Hill Chapel, on Leeds’s central square.

Almost immediately, Wicksteed undertook an ambitious program of scholarly and theological self-study. A steady stream of publications in a wide variety of disciplines flowed from these efforts.

Wicksteed initially focused on the Middle Ages in his scholarly investigations, eventually leading to his ground-breaking philological work on Dante and earning for him the reputation of one of England’s preeminent medieval scholars.

Wicksteed was also a well-regarded Classicist, who published translations of Aristotle in the Loeb Classical Library.

A little later, Wicksteed widened his focus to general problems of theology and philosophy, especially ethics.

In 1879, Wicksteed read the newly published bestseller, Progress and Poverty, by the American journalist and political economist, Henry George. Reading this book seems to have caused him to pour his considerable energies into mastering academic economics.

Within a few years, Wicksteed began publishing his own reflections on economics, drawing on the work of his contemporaries, John Bates Clark and, especially, William Stanley Jevons.

Eventually, Wicksteed was appointed a lecturer on economics in the University of London’s extension program, which provided university-level lectures on various subjects to the general public.

Wicksteed’s fist considerable publication in economics was The Alphabet of Economic Science, which appeared in 1888 with the subtitle, “Part I, Elements of the Theory of Value or Worth.” However, no Part II was ever published.

Wicksteed’s second monograph in the field of economics was An Essay on the Co-ordination of the Laws of Distribution (see “Selected Works by Wicksteed” below), published in 1894. This book sold very well.

Three years later, in 1897, Wicksteed resigned his appointment to the Unitarian ministry and began to live exclusively from his writings.

his 1910, Wicksteed published his masterpiece, The Common Sense of Political Economy (see below), which contained the most comprehensive presentation of his economic ideas. This book was an even greater success than his previous monograph on economics had been.

The Common Sense of Political Economy also had a considerable influence on the discipline of economics. In particular, in a book published in 1932, An Essay on the Nature and Significance of Economic Science (see below), Lionel Robbins further developed ideas Wicksteed presented in his 1910 magnum opus.

In his later years, Wicksteed became a prominent public opponent of animal vivisection.

Wicksteed has been called the “British Austrian,” meaning he represented the classical Austrian tradition of political economy, following up on the seminal contributions of Carl Menger. (See our article on “Austrian economics.”)

For example, Wicksteed subscribed to William Stanley Jevons’s ideas on the subjective foundation of economic value, which the latter had arrived at independently of Menger.

Wicksteed also developed the work of John Bates Clark and others on the theory of marginal production, one of the central concepts of classical political economy.

More specifically, Wicksteed proved important new theorems involving marginal production in both his 1894 book on the Co-ordination of the Laws of Distribution and in his 1910 magnum opus, The Common Sense of Political Economy.

With the latter volume—his most influential work on an economic subject—Wicksteed essentially produced a textbook, which in many ways reflected the Principles of Economics, the widely used economics text Alfred Marshall had published two decades earlier, in 1890.

It was commonly conceded that—despite the fact that Marshall was a Cambridge don, while Wicksteed was essentially self-taught—Wicksteed’s textbook was more clearly written, more precise, and more modern in spirit than Marshall’s.

It might be argued that Wicksteed owed the considerable reputation he enjoyed during his lifetime above all to his literary flair and to his insight into how best to organize a textbook in order to make the difficult subject of economics intelligible to the general reader.

In short, Wicksteed was the epitome of a Victorian autodidact and self-made gentleman.

The Alphabet of Economic Science: Part I, Elements of the Theory of Value or Worth (1888).

An Essay on the Co-ordination of the Laws of Distribution (1894).

The Common Sense of Political Economy, Including a Study of the Human Basis of Economic Law (two volumes) (1910).