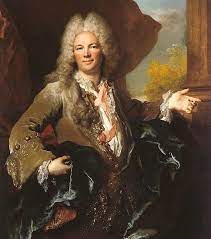 It is known that Cantillon’s father owned an estate in the Atlantic coastal town of Ballyheigue in County Kerry in the southwestern corner of Ireland. It seems likely that Cantillon was born there.

We do not know anything about Cantillon’s schooling, but we know that he turned up in France sometime during the first decade of the eighteenth century, when he was probably in his twenties. He eventually became a French citizen.

We next pick up Cantillon’s tracks in 1711, when he is known to have been employed by the British Paymaster General’s office, one of the cabinet ministries at the time. He worked for the Paymaster General in Spain, facilitating payments to British prisoners of war during the War of the Spanish Succession.

Cantillon remained in Spain until the conclusion of the war in 1714, at which time he returned to Paris, where he embarked upon a career in the banking industry.

Cantillon was able to advance his banking career with help from two sources. First, a cousin of his, who was already well-established in the Paris branch of his family’s bank, gave him employment.

Second, his former employer, the British Paymaster General, agreed to finance Cantillon’s effort to buy out his cousin’s interest and take over ownership of the bank where he worked.

After acquiring his own bank, Cantillon specialized in managing monetary transfers between Paris and London. With his many contacts through his family and his government employment, he was able to make a success of his banking venture.

Next, we know that Cantillon became involved with John Law—another British economic thinker and businessman who was operating in France at the time.

Cantillon was able to get in on the ground floor of Law’s Mississippi Company—a government-backed monopoly for the development of the huge territory of “Louisiana,” which then consisted of all the land between the Appalachian Mountains and the Mississippi and Missouri River basins, from east to west, and from Manitoba to the mouth of the Mississippi at the Gulf of Mexico, from north to south.

Cantillon invested heavily in the company, buying a large number of shares early on and selling them later for a huge profit, making him immensely wealthy. He had the foresight to get out of his position in the company’s shares before the “Mississippi Bubble” burst, leaving Law himself virtually penniless.

Law became outraged at Cantillon and threatened to have him deported from France. However, Cantillon replied that he preferred to stay and work with Law to try to rebuild a new company built on sounder principles.

Many other ruined investors in the Mississippi Company also blamed Cantillon for pulling out when he did. Though essentially unfair—the collapse of the Bubble was inevitable and would have brought down Cantillon, as well, if he had not had the foresight to get out in time—the general perception that Cantillon was somehow responsible for the catastrophe led to innumerable lawsuits being filed against him, as well as to threats on his life. He continued to be harried by both civil and criminal lawsuits for the rest of his life.

During the 1720s, with money now no object, Cantillon married and traveled throughout Europe with his new bride.

Cantillon set up households in both London and Paris in the late 1720s and traveled frequently back and forth between them to tend to his various business affairs.

It was during this period, around 1730, that Cantillon put his economic thoughts on paper, producing his only book, entitled Essai sur la nature du commerce en général [Essay on the Nature of Commerce in General] (see “Cantillon’s Work” below).

In 1734, Cantillon’s London home was burned to the ground. It was assumed that Cantillon perished in the fire. It was also generally assumed at the time that the fire was set on purpose and that Cantillon was murdered.

However, one modern scholar has floated the theory that Cantillon staged his own death to escape the legal harassment that continued to plague him and that he lived out the rest of his life under an assumed name in the Dutch South American colony of Surinam.

The Essai—sometimes called “the first treatise on economics”—was not published until many years after Cantillon’s death, in 1755, but it was widely circulated before that in manuscript. It had a wide impact on the thinking of later French economists, including François Quesnay, Anne-Robert-Jacques Turgot, Jean-Baptiste Say, and Frédéric Bastiat, as well as the great Scottish philosopher, Adam Smith.

Cantillon’s Essai was subsequently forgotten until rediscovered in the late nineteenth century by the eminent English economist, William Stanley Jevons.

The Essai is often considered to be the first comprehensive treatise on political economy. As such, Cantillon made several different contributions, which may be conveniently divided into four categories.

To begin with, Cantillon is the first person to apply the standard methodology of the natural sciences to economic phenomena, teasing out causes and effects by using idealized models that examine the behavior of one variable under a given set of assumptions, while holding other variables constant (“ceteris paribus”).

Second, Cantillon made several advances to monetary theory, for example, holding that prices are influenced by supply and demand relative to a specific market, as well as the quantity of money available for exchange.

Finally, Cantillon opened up the new field of spatial economics, which focuses on costs of production arising from geographical factors affecting transportation, such as distances and physical barriers (bodies of water, mountains, and the like).

Richard Cantillon’s Essay on the Nature of Trade in General: A Variorum Edition, edited by Richard van den Berg (2015).

The Essai has been translated into English three times:

Essai sur la nature du commerce en général, by Richard Cantillon, edited with an English translation and other material by Henry Higgs (out of print) (1931).

An Essay on Economic Theory, translated by Chantal Saucier and edited by Mark Thornton (2010).

Essay on the Nature of Trade in General, translated and edited by Antoin E. Murphy (2015).