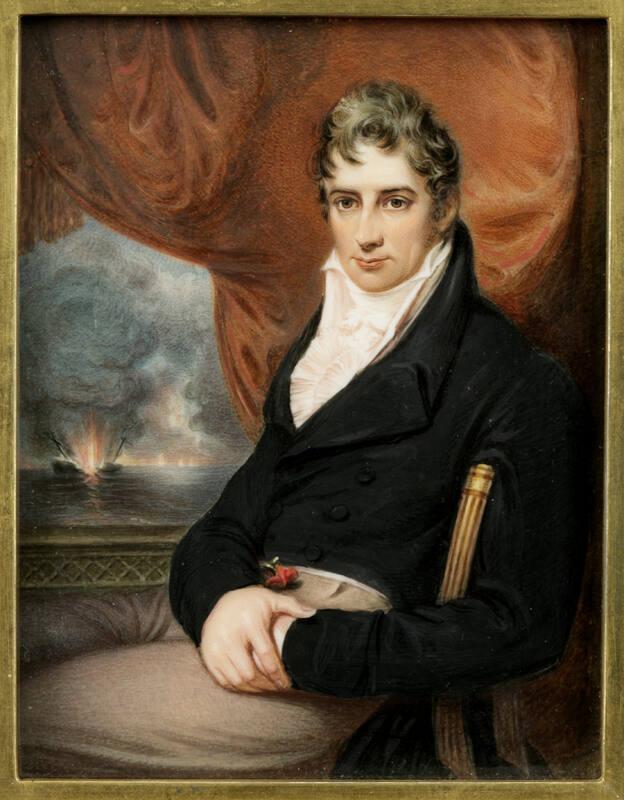 Robert Fulton (1765–1815) was born on a farm near Little Britain, a hamlet in southeastern Pennsylvania some 20 miles south of the town of Lancaster, and a stone’s throw from the Susquehanna River to the west and the Maryland border to the south.

Fulton’s parents, who were immigrants from Ireland, were not successful at farming. After their farm was foreclosed upon in 1771, Fulton’s family moved into the nearby town of Lancaster. Three years later, in 1774, his father died.

Fulton’s mother taught him to read and write at home. At the age of eight, the boy was sent to a Quaker school. A few years later, he was apprenticed to jewelry shop in Philadelphia jewelry shop.

In this job, the young Fulton learned how to paint miniature portraits on ivory for use in lockets.

In 1786, the young man had saved up enough money to buy a new farm, this time located on Hopewell Township, near Pittsburgh. Fulton settled his mother and siblings on the new property.

Fulton himself remained in Philadelphia, where he applied himself to developing his skill in drawing, with a view to earning his living as a painter.

Fulton was a good-looking and gregarious young man, who had already made many friends among Philadelphia’s merchants. A group of these friends banded together to raise money to make it possible for him to travel to London for further training in his art.

Fulton arrived In London in late 1786, carrying letters of introduction to several prominent individuals. One of these persons was Benjamin West, a distinguished American artist in residence there, who had known Fulton’s father back in Pennsylvania years before.

West invited Fulton to live in his home, where the younger man resided for the next three years.

Through his contacts with West and others in London, Fulton began to acquire commissions for portraits and was soon able to support himself from his painting.

At the same time, Fulton seems to have realized that his talent for painting was ultimately limited. At any rate, he also began at this time to cast about for other career opportunities.

During the early 1790s, there occurred what historians call the “canal mania” of the late eighteenth century. This was a sudden and startling boom in the construction of canals that occurred in both Europe and North America.

The construction of so many new canals—the purpose of which was of course to move goods to market more efficiently—naturally raised the question of how best to improve the shipping stock plying the canals, and even the nature of the canals themselves.

Fulton appears to have become infected with canal mania early on. He is known to have made preliminary sketches for a steamboat as early as 1794. In that same year, he obtained a patent for a design for a canal constructed on an inclined plane, which, if it had been successful, would have obviated the need for locks.

Fulton also patented plans for a dredging machine and several other inventions around this time.

In Manchester, Fulton made the acquaintance of Robert Owen, the Welsh-born textile manufacturer and socialist thinker, who is most famous for the utopian communities he later founded in the US, notably, New Harmony, Indiana, in 1825.

Back in 1794, though, Owen was a wealthy cotton textile manufacturer interested in financing improvements to canal transportation. He agreed to finance the implementation of Fulton’s idea for an inclined canal. Unfortunately, Fulton was unable to apply his idea successfully in practice, and he was eventually forced to abandon the undertaking.

In spite of this setback, Fulton did not give up his dream of constructing a financially viable steamboat.

Fulton did not originate the idea of applying steam power to riverine and marine transportation. The first commercially viable steam engine had, of course, been invented by James Watt some two decades previously, in 1776.

Moreover, a number of individuals had the idea of applying steam power to shipping before Fulton. For example, in the US, the first successful steamboat, built by the inventor John Fitch, cruised the Delaware River in 1787.

Even earlier experiments with applying steam power to river transportation had occurred in France, where the first steamboat propelled by a paddle-wheel had been demonstrated on the Saône River by the Marquis de Jouffroy In 1783.

So, what, exactly, did Fulton contribute to the development of the steamboat? The full answer is too complex to rehearse here, but in a nutshell, we may mention the following points.

In 1796, Fulton made the acquaintance of Francis Egerton, Third Duke of Bridgewater, who owned a privately constructed canal between Worsley and Manchester, and was financing experiments on it with steam-powered tugboats. Bridgewater allowed Fulton to conduct his own experiments, with a view to submitting a proposal for constructing a steamboat compatible with the existing canal.

Fulton worked on the Bridgewater project for several years. However, in the end, Bridgewater was unhappy with some of the technical details in the proposal that Fulton submitted, and in 1801 the project was ultimately awarded to a competitor.

While work on the Bridgewater project was under way, in 1797, Fulton relocated to Paris temporarily in order to promote his paintings. While living in France, he designed the first working submarine, albeit powered by human rowers.

In 1800, Fulton reached out to the French government under Napoleon Bonaparte to financial backing for his submarine project. After being refused twice, Fulton succeed with a third application.

With the injection of new money, Fulton was able to finish his submarine rapidly in a specially constructed shipyard in Rouen. In late 1800, his submarine made its maiden voyage beneath the surface of the Seine River at Rouen.

The following year, in 1801, Fulton met Robert R. Livingston, the newly appointed American ambassador to France. With Livingston’s Backing, Fulton built his first experimental steamboat, which he launched—once again in the Seine River—in 1803.

This prototype steamboat was 66 feet long, with an eight-foot beam. It could make around 3 knots against the current. Unfortunately, after a successful trial run, the boat sank.

In 1804, with the war between France and Britain heating up and fear of a French naval invasion mounting, Fulton returned to England. He received a commission from the government of Prime Minister William Pitt the Younger for the construction of mines and other naval defenses.

After the crushing defeat of the French fleet by Admiral Horatio Nelson at the Battle of Trafalgar off the coast of southern Spain in October of 1805, the threat of a French invasion receded. However, Nelson purchased his magnificent victory with his life.

Nelson’s death rendered the victory at Trafalgar bittersweet for the British nation. For Fulton personally, Trafalgar was equally equivocal, seeing that it meant his services were no longer required by the British government.

Still working with Livingston as his partner, Fulton began the construction of a new steamboat. This time, he intended it to enter into regular service between New York City and the New York state capital at Albany, some 150 miles up the Hudson River.

In 1807, the new steamboat, popularly called the Clermont, was larger than Fulton’s earlier prototype, with a length of feet and an 18-foot beam. Its twin paddle wheels were 15 feet in diameter and boat displaced 160 tons

Fulton’s fame rests largely on the fact that the Clermont was the first commercially successful steamboat in the US.

Initially, the public was skeptical about the concept of the steamboat. Newspapers called the Clermont “Fulton’s Folly.” But soon the reliability of the Clermont and the convenience of the regular service it provided between New York’s commercial and political capitals turned public opinion around.

Within a few months, Fulton went from being ridiculed in the press to being lionized.

In the remaining years of his life, Fulton continued to work on building steamboats in other locations and on improving his designs.

The US government gave Fulton a contract for a steam-powered war frigate during the War of 1812, but construction of the ship was not completed until after his premature death in 1815.

The largest and most important of Fulton’s late projects was the development of a steamboat service running from Pittsburgh, along the Ohio River to the Mississippi River, and on to New Orleans.

The nearly four-month-long maiden voyage of the New Orleans, as Fulton’s new steamboat was dubbed, occurred between October of 1811 and January of 1812.

This last great achievement of Fulton’s was very significant as an “existence proof” of the ability of steamboats to travel upstream against even powerful currents.

It also vividly demonstrated how the still uncharted and largely uninhabited territory the New Orleans traversed could be settled efficiently and rapidly by means of this astonishing new mode of transportation.

In this way, Fulton had a direct impact on the American psyche and must be accounted one of those who firmly implanted into the American consciousness the idea of “manifest destiny.”

Selected Books About Fulton and His Inventions

Sale, Kirkpatrick, The Fire of His Genius: Robert Fulton and the American Dream (2001).