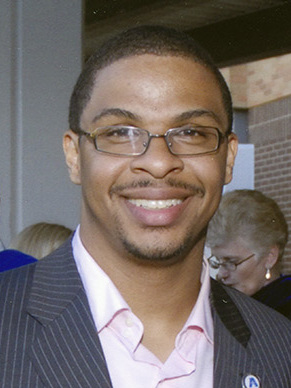 Roland G. Fryer, Jr. (b. 1977), was born in Florida. His father’s family hailed from the Daytona Beach area. However, he was raised from the age of four mostly in Lewisville, Texas, a small town about half-way between Dallas and Denton.

Fryer’s mother’s family was well-established in the black community of Tulsa, Oklahoma. One of her uncles played the saxophone with Duke Ellington. She herself is said to have attended Juilliard. Nevertheless, she disappeared from Fryer’s life when he was still very small. Accounts of how this happened vary.

Fryer was raised by his father, who was originally a high school math teacher. In time, however, Fryer, Sr., began drinking, became abusive, and lost his job.

Fryer has said that from the age of 13 he “raised himself,” altering his birth certificate to obtain a full-time job working the drive-thru window at McDonald’s.

Fryer soon became, in his own words, “a full-fledged gangster,” toting a .357 Magnum and engaging in acts of petty crime. Many members of his extended family were involved in producing and selling crack cocaine and ended up in prison. One of his first cousins was murdered in a drug-related slaying.

When he was 15, Fryer narrowly missed being with a group of his friends who were arrested in the act of committing a burglary. He states that this close call shook him out of his complacency and began to put his life on a different track.

Fortunately, Fryer was a gifted athlete who was a star of the Lewisville High School football and basketball teams. On the strength of this talent, the teenager was able to secure an athletic scholarship to attend college at the nearby University of Texas at Arlington.

After arriving at the UT-Arlington campus in 1995, Fryer decided not to play football for the school after all, but to pursue an academic scholarship, which he duly obtained.

Upon receiving his BA, Fryer was accepted into the doctoral program in economics at Pennsylvania State University, where he worked under the supervision of the Swedish-born economist, Tomas Sjöström. He received his PhD from Penn State in 2002.

After obtaining his PhD, Fryer spent two years, 2001–2003, at the University of Chicago as an American Bar Association (ABA) Doctoral Fellow. While at Chicago, he worked with the Nobel Prize–winner Gary Becker and made the acquaintance of Steven D. Levitt. He co-authored his first published papers with Levitt.

In 2003, Fryer obtained a prestigious, three-year appointment as a Junior Fellow at Harvard University. Harvard Junior Fellows receive generous financial support to pursue their own research interests for three years, free from any requirements with respect to departmental affiliation, writing, testing, or teaching.

In 2006, Fryer was appointed an Assistant Professor of Economics at Harvard. He also received joint appointments as a Faculty Associate at Harvard’s Institute for Quantitative Social Science and as Associate Director of Harvard’s Du Bois Institute for African and African-American Research, both for two years, through 2008.

The following year, in 2007, the 30-year-old Fryer was awarded tenure by Harvard and promoted to full Professor. He is currently the Henry Lee Professor of Economics there.

In 2008, Fryer founded the Education Innovation Laboratory (EdLabs) at Harvard, which he also served as Director until 2019. In that year, Harvard closed EdLabs down amid a flurry of allegations of Title IX violations. Fryer was also temporarily suspended from his teaching duties.

In 2015, Fryer was awarded the John Bates Clark Medal for the best American economist under 40.

In 2016, one of Fryer’s papers, “An Empirical Analysis of Racial Differences in Police Use of Force”—initially published as a working paper, then published in a top-ranked peer-reviewed journal three years later—created a storm of public controversy. (See the discussion under “Fryer’s Ideas,” below.)

Now aged 44, as of 2021 Fryer has published more than 70 peer-reviewed academic articles in economics.

Fryer has said that:

I basically want to figure out where blacks went wrong. One could rattle off all the statistics about blacks not doing so well. You can look at the black-white differential in out-of-wedlock births or infant mortality or life expectancy. Blacks are the worst-performing ethnic group on SAT’s. Blacks earn less than whites. They are still just not doing well, period.

He goes on to explain that the ultimate aim of all his work is to design more effective policies through the use of the well-established scientific principles of economics, combined with empirical evidence and randomized experiments.

He has investigated a wide variety of topics, from affirmative action and school voucher programs to the social effects of giving children distinctive Afrocentric names and of the stigma attached to “acting white.”

Fryer believes that objective truth can be discovered on these topics. He refuses political labels (“conservative” or “liberal”), insisting on following the evidence wherever it leads.

Nevertheless, one of his essays stirred an extraordinary public controversy. Entitled “An Empirical Analysis of Racial Differences in Police Use of Force,” the article was first published as a working paper in 2016, then later revised and printed in a high-visibility peer-reviewed journal in 2019. (See “Selected Publications of Roland G. Fryer, Jr.,” below, for publishing details.)

In this article, Fryer determined that the widespread perception that black suspects are at an increased risk of being shot by police officers while being arrested as compared to white suspects—when controlled for such factors as resisting arrest—is unsupported by the evidence.

This conclusion was highly uncongenial to many observers, to say the least, and elicited an avalanche of academic rebuttals and inflammatory personal attacks on Fryer. He revised the original paper, but stands by its basic findings.

Overall, it is safe to say that Fryer’s work has had significant impact. It has been widely reported in the media and has been cited in Congressional testimony.

“A Measure of Segregation Based on Social Interactions,” with Federico Echenique, Quarterly Journal of Economics, 122: 441–485 (2007).

“Getting Beneath the Veil of Effective Schools: Evidence from New York City,” with Will Dobbie, American Economic Journal: Applied Economics, 5: 28–60 (2013).

“Updating Beliefs When Evidence is Open to Interpretation: Implications for Bias and Polarization,” with Philipp Harms and Matthew O. Jackson, Journal of the European Economic Association, 17: 1470–1501 (2019).