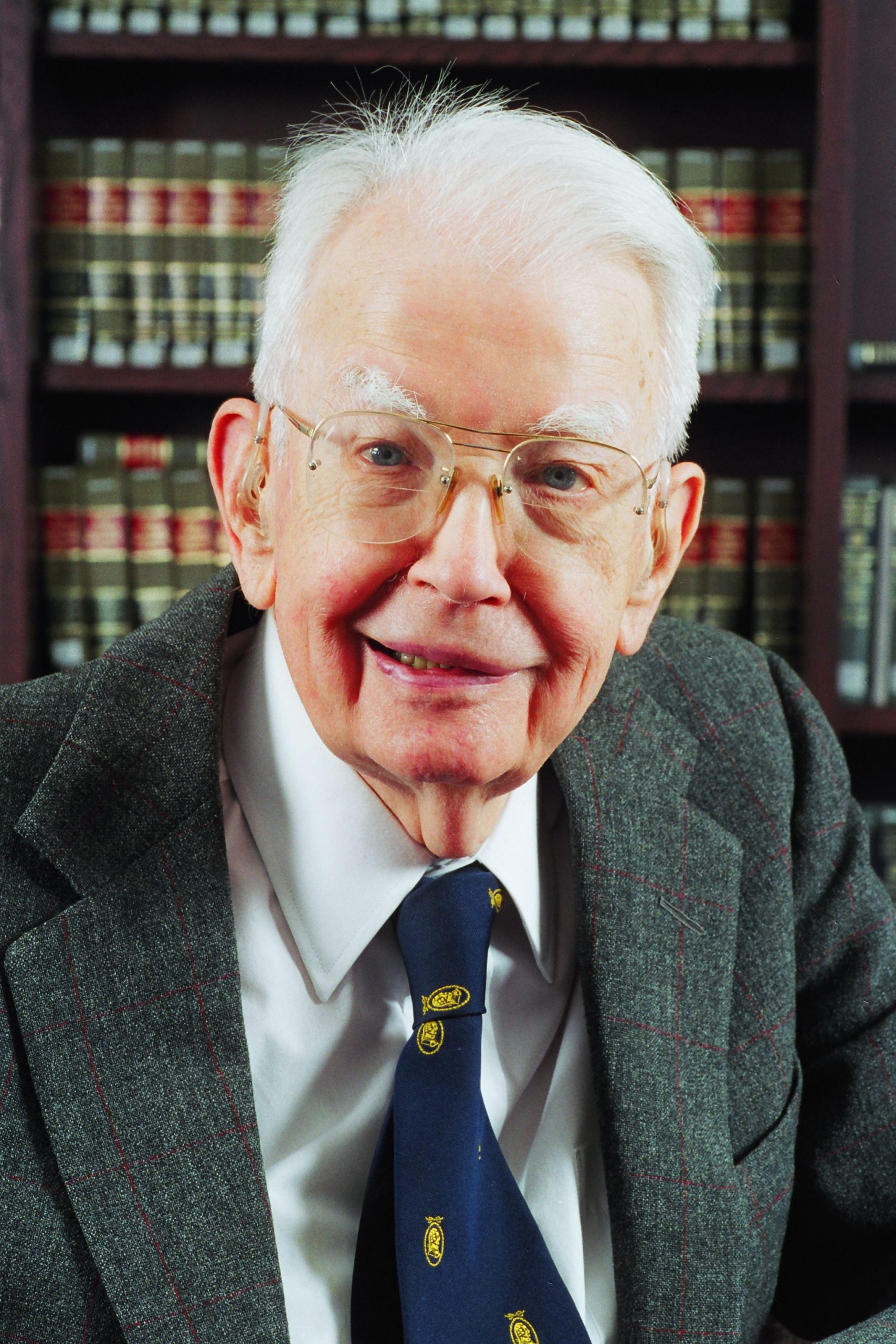 Ronald H. Coase (1910–2013) was born in Willesden, a suburb northwest of London. His father and mother were both telegraph operators for the post office.

Coase developed a serious problem with his legs as a child and was forced to attend to special school for the handicapped. However, he showed academic promise and was able to win a scholarship, which allowed him to attend a private grammar school when he was 12.

Beginning in 1927, Coase took courses at the University of London as a non-matriculated, “external” student.

Two years later, in 1929, Coase was able to enter the London School of Economics (LSE) as a regular student. He received his bachelor’s degree in commerce in 1932.

During his last year at LSE, Coase obtained a traveling fellowship to study at the University of Chicago, where he attended lectures by Frank Knight and Jacob Viner.

Coase’s first job after completing his degree in 1932 was as an assistant lecturer (a kind of adjunct) for two years in Scotland at the Dundee School of Economics and Commerce (a forerunner of the University of Dundee).

In 1934, Coase obtained a similar temporary lectureship at the University of Liverpool, where he taught commerce for a year. He then returned to the LSE as a regular faculty member, where he worked until 1951.

In 1937, Coase had married an American woman, which made a move to the US particularly attractive to him. In 1951, he obtained a position at the University at Buffalo in the state of New York.

In 1991, Coase received the Nobel Memorial Prize in Economic Sciences.

Coase’s contributions to economics were wide ranging and profound.

Among many other things, Coase is known as the founder of what is now the flourishing field of “law and economics.”

The essence of Coase’s contribution was the insight that the economy is embedded in a web of social, political, and legal systems, which all constrain the operation of the abstract principles of classical economics.

Coase has written the following:

It is suicidal for the field to slide into a hard science of choice, ignoring the influences of society, history, culture, and politics on the working of the economy.

Coase began his innovative work early in his career. In 1937, he published what became his single most famous and influential article, “The Nature of the Firm” (for details, see “Selected Works by Coase” below), on the nature and limits of business firms.

In this seminal work, Coase introduced the concept of “transaction costs” to explain why individual merchants, manufacturers, and other entrepreneurs form partnerships, corporations, and other types of commercial enterprises. He hypothesized that by means of a business enterprise, or company, an economic actor can lower his transaction costs compared to the costs he would incur by entering directly into a series of bilateral trading contracts in the marketplace. This conjecture was later empirically confirmed.

Another outstanding work by Coase that has been transformative for the entire discipline of economics was “The Problem of Social Cost,” published in 1960. In this article, he introduced the idea of “externalities,” which are a side effect of commercial activity between a buyer and a seller that creates a cost for a third party that is not represented by the price of the goods or services being sold.

As a solution to the problem of externalities, Coase proved what is now known as the “Coase theorem.”

The Coase theorem states that under ideal economic conditions, conflicts in property rights arising through externalities can be solved by bargaining between the parties involved, the purpose of which is to negotiate a contractual relationship between them that more accurately reflects the full costs incurred by both parties, including the underlying value of the property rights in question, as well as the externalities arising from both parties’ commercial activity.

The Coase theorem, then, represents the most efficient outcome and the solution to the problem of externalities—or, rather, it would do so if economic conditions were ideal.

Unfortunately, due to transactions costs, Coase believed that such ideal conditions could never be present in the real world.

Essays on Economics and Economists (1994).

“The Industrial Structure of Production: A Research Agenda for Innovation in an Entrepreneurial Economy,” with Ning Wang, Entrepreneurship Research Journal, 1(2): 20122002 (2011).