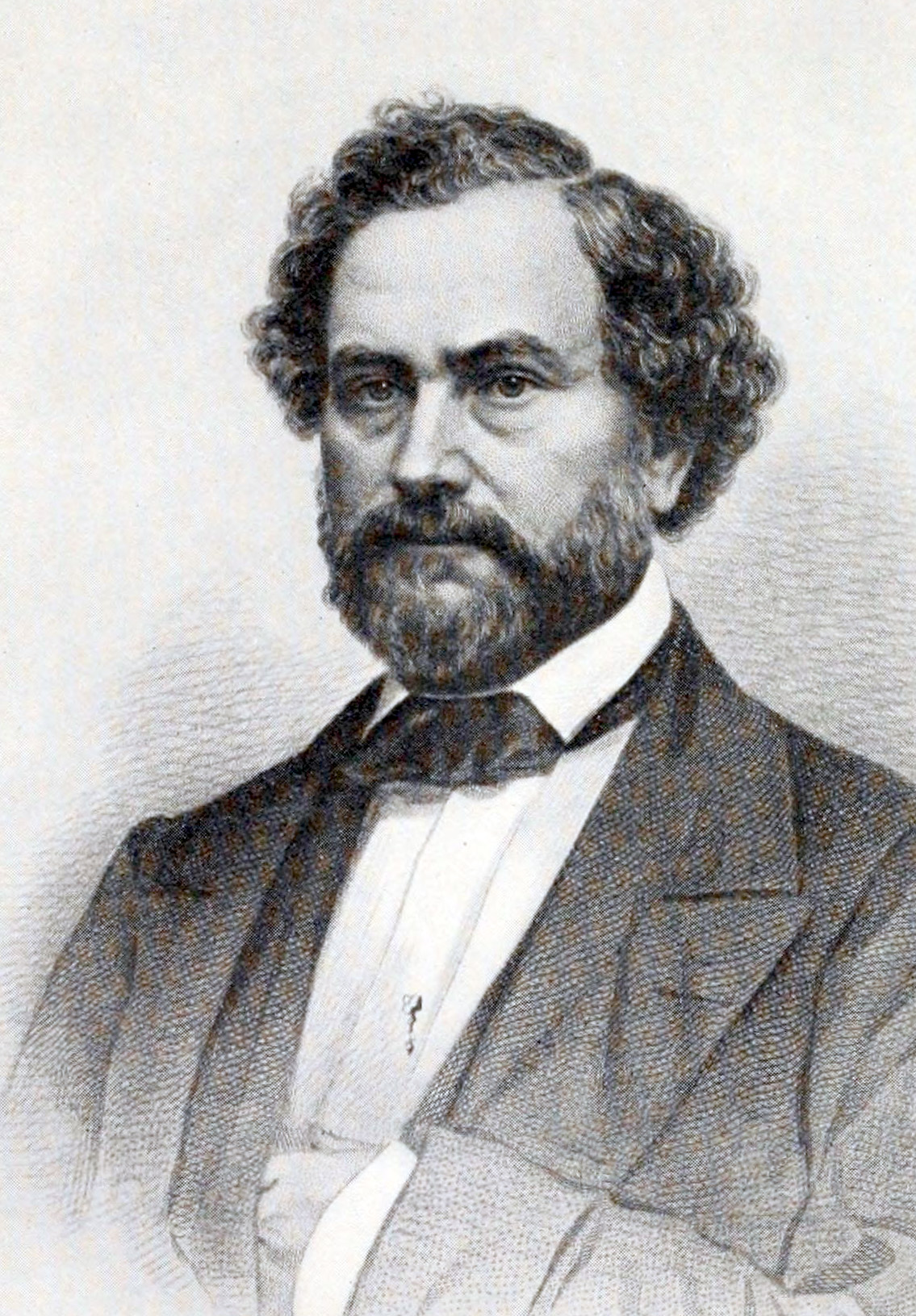 Samuel Colt (1814–1862) was born in Hartford, Connecticut. His father was a farmer turned businessman.

Colt’s maternal grandfather had been a major in the Continental Army during the Revolutionary War and one of the boy’s most precious possessions growing up was the major’s old flintlock pistol.

Colt lost his father when he was six years old. His father remarried, providing the boy altogether with six siblings, of whom two died young of natural causes and two died by their own hand.

At the age of 11, Colt was indentured to a farmer in nearby Glastonbury, Connecticut. He did chores for the family he lived with, while attending school.

In later life, Colt said that his favorite reading at this time was an early American encyclopedia, in which he found stirring accounts of the exploits of early-nineteenth-century inventors such as Robert Fulton, as well as fascinating descriptions of manufacturing processes such as the production of gunpowder. Colt claimed that reading about such things motivated him strongly to try to accomplish similar heroic feats of his own.

Around this same time, Colt heard a couple of soldiers talking about the newest generation of double-barreled rifle. The soldiers were speculating about the possibility of a gun that could shoot more than twice before having to be reloaded, but ultimately decided such a thing was inherently impossible.

Colt later claimed he decided then and there to show the world that he could accomplish what everyone else thought to be impossible.

At age 15, in 1829, Colt began working in a textile plant in Ware, Massachusetts, that belonged to his father. During this time, he had access to tools, materials, and the expertise of his fellow workers in the factory.

Using this equipment and know-how, Colt devised a homemade galvanic cell, as well as an explosive device that worked underwater. He demonstrated his underwater bomb in a nearby lake during the Fourth of July celebration that year.

Colt’s father then sent him to boarding school, where he amused his classmates by assembling and setting off his own fireworks.

On the following Fourth of July, in 1830, Colt’s fireworks unfortunately caused a fire, putting an end to his academic career.

In frustration, Colt’s father sent the boy to sea as a midshipman, with a view to providing him with a career under conditions that would curtail his wilder impulses.

Colt did not take to sailing as a career, but while on board a ship bound for Calcutta (now Kolkata), in India, he did have a formative experience that was to heavily influence his future career.

Colt was studying the action of the ship’s capstan—which is a type of ratchet-and-pawl mechanism—when it dawned on him that such a device might be adapted to “pepperbox”-style, multi-barreled pistols to provide mechanical control of the rotating barrels. Up to that point, firearms with multiple, rotating barrels required manual adjustment after each shot, which was not only slow but also led to frequent misalignment resulting in explosions.

When Colt returned home, in 1832, he explained his idea to his father, who agreed to finance the development of a prototype models. With his father’s funds, Colt was able to manufacture two guns implementing his ratchet-and-pawl design. The first one blew up when it was fired, but the other one performed properly.

However, Colt’s father refused to underwrite any more of his son’s experiments, forcing the young man to find another way of financing the further development of his idea.

In an astonishing career pirouette, Colt undertook to make a name for himself as a public showman and lecturer. His first idea involved asking audience members to allow themselves to be dosed with the recently discovered anesthetic, nitrous oxide (“laughing gas”). Colt advertised himself as “the Celebrated Dr. Coult of New-York, London, and Calcutta.”

When the laughing gas project did not pan out, Colt went into business with the American sculptor Hiram Powers, whom he had met while visiting one of his brothers who was then living in Cincinnati, Ohio.

At the time, like Colt, Powers was experimenting with different forms of hucksterism to make a living while pursuing his art. (He finally moved to Italy in 1837.)

Powers and Colt put together a show based on Dante Alighieri’s Divine Comedy. Powers contributed wax sculptures and paintings based on centaurs, mummies, demons, and other creatures from Dante’s masterpiece. Colt supplied fireworks and delivered the lectures, which centered on the concepts of sin, punishment, and redemption.

Therefore, Colt invested his savings in a new effort to produce a working prototype. This time, he decided to abandon the “pepperbox” concept and to concentrate on developing a pistol with a mechanically controlled, rotating, ammunition cylinder.

In 1835, with the help of a professional gunsmith, Colt successfully developed his first prototype revolver. On the advice of lawyers, he set sail for London in order to patent his new invention in England before the US—which was necessary at the time in order to obtain an English patent at all. On the same trip, he also filed for a patent in Paris.

Upon returning home in 1836, Colt obtained his US patent for a “revolving gun.” He then sought investors to begin mass production of the new invention.

The state of New Jersey finally came up with the money for the first factory for Colt firearms, the Patent Arms Manufacturing Company of Paterson, New Jersey. Colt sold New Jersey his patent rights in his invention in return for a royalty to be paid to him for each gun sold. Unfortunately, the Panic of 1837 hit the next year and Colt’s first venture eventually went belly up.

To recuperate from this setback, Colt now turned back to his earlier work with underwater explosives. He became involved in helping Samuel F. B. Morse to lay telegraph cables across streams and lakes. On this project, Colt also developed a new type of waterproof electrical cable.

Colt’s luck finally turned in 1847. In that year, Captain Samuel Houston Walker of the Texas Rangers came across a Colt revolver that had wended its way to Texas after having been manufactured in New Jersey a decade earlier. Recognizing the immense potential of Colt’s design, Walker traveled to the East Coast in search of the inventor.

When the Texas Ranger finally located Colt, in a gunsmith shop in New York City, he gave him an order for 1000 revolvers to equip the Rangers for the upcoming war with Mexico. On the basis of this order, Colt was then able to raise funds to build a new factory to produce the guns. This time, he located his factory in Hartford, Connecticut.

Walker also worked with Colt to improve the basic design of the Colt revolver, recommending that the capacity of the chamber be increased from five to six bullets and the caliber of the bullets increased to .45. (Walker was to die in Mexico only a few months later.)

By the following year, 1848—with the Mexican-American War now raging—Colt’s new Connecticut factory started producing revolvers modified in accordance with Walker’s specifications, which came to be known a “six-shooters.”

Throughout the rest of his life, Colt continued to make important innovations to his revolver, notably, in his insistence on the use of interchangeable parts.

Colt was also a pioneer in advertising and mass marketing, introducing such things as the use of art in ads, celebrity endorsements, and consumer prizes.

After the Mexican War was over, the Civil War soon followed, causing Colt’s sales to continue to soar.

After that, the Colt six-shooter became the most widely used firearm during the settling of the American West.

Although Colt did not live to see this last development, when he died in 1862—at the age of 48—he was one of the wealthiest men in America.

Bainbridge, John, Jr., Gun Barons: The Weapons That Transformed America and the Men Who Invented Them (2022).

Edwards, William B., The Story of Colt’s Revolver: The Biography of Col. Samuel Colt (1953).

Wilson, Robert Lawrence, Colt, An American Legend: The Official History of Colt Firearms from 1836 to the Present (1985).

Wyckoff, Edwin Brit, The Man Behind the Gun: Samuel Colt and His Revolver (2010).