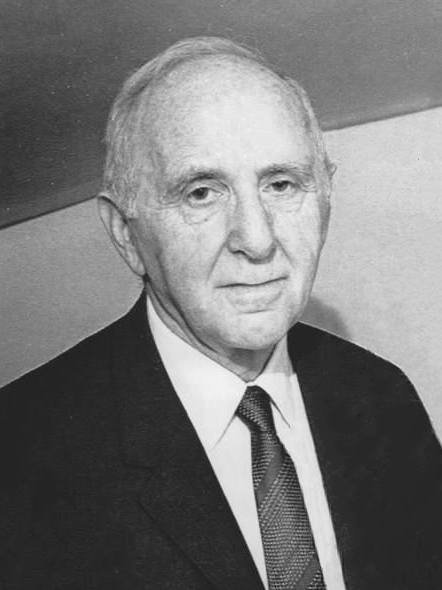 Simon Smith Kuznets (1901–1985) was born Semyon Abramovich Kuznets in the city of Pinsk in what was then the Russian Empire and is now southwestern Belarus. His parents were of Lithuanian-Jewish extraction.

In 1918, Kuznets entered the Kharkiv Institute of Commerce (now the Simon Kuznets Kharkiv National University of Economics), where he studied history, political economy, mathematics, and statistics.

In 1920, the Russian civil war spilled over into Ukraine and disrupted the usual operations of the Kharkiv Institute. Kuznets’s precise activities at this time are not known, but it is known that he became associated with the Southern Bureau of the All-Union Central Council of Trade Unions.

During this period, Kuznets published his first scientific paper, “Monetary Wages and Salaries of Factory Workers in Kharkov in 1920.”

In 1922, Kuznets and his family emigrated to New York City in the US, where he immediately enrolled in Columbia University.

At Columbia, Kuznets obtained all three of his higher degrees in the field of economics: his bachelor’s degree in 1923; his master’s degree in 1924; and his PhD in 1926.

While in graduate school, Kuznets also worked as a Research Fellow with the Social Science Research Council, where he studied patterns in prices.

This research led to Kuznets’s doctoral dissertation and subsequently to his first book, Secular Movements in Production and Prices, which was published in 1930 (see “Selected Works by Kuznets” below).

After completing his doctoral work, Kuznets joined the research staff of the National Bureau of Economic Research (NBER) in Cambridge, Massachusetts, where he worked both full- and part-time from 1927 until 1961.

Beginning in 1931, Kuznets took up a part-time teaching position at the University of Pennsylvania (Penn) in Philadelphia. In 1936, his position at Penn became full-time.

In 1954, Kuznets was named Professor of Political Economy at Johns Hopkins University, where he taught until 1960.

In 1961, Kuznets was hired by Harvard University, where he taught until his retirement in 1970.

For several years during the World War II, Kuznets also worked as Associate Director of the US War Production Board’s Bureau of Planning and Statistics.

During the post-war period, Kuznets acted as a consultant for several foreign countries, including China, Taiwan, Japan, Korea, India, and Israel.

In 1971, Kuznets received the Nobel Memorial Prize in Economic Sciences. His Nobel lecture, “Modern Economic Growth: Findings and Reflections,” was published in 1973 in the American Economic Review (see below).

Kuznets is primarily associated with the extension and systematization of the statistical analysis of economic data (“econometrics”) in order to gain a picture of large-scale features of national economies, both in the present and the past, in the industrialized West and around the developing world.

Kuznets readily acknowledge his intellectual indebtedness to such earlier economists as Joseph A. Schumpeter, A.C. Pigou, and Vilfredo Pareto, among others.

However, Kuznets’s originality lay in the way he combined more detailed and sophisticated econometric methods with attention to the wider historical, demographic, and social contexts in order to provide a more complete picture of an economy.

Kuznets also deserves much of the credit for developing many of the large-scale economic indicators, such as the “gross national product,” which have become the common currency of economic discussion both inside and outside the academy today.

In general, Kuznets was skeptical of highly theoretical or a priori approaches to economics. He saw his role as providing empirical evidence to keep the theoreticians honest.

Another highly influential aspect of Kuznets’s work was on economic dynamics—including “long swings” or “Kuznets cycles,” as well as other long-term trends.

Especially  notable is the fact that the analyses Kuznets made of the principal drivers of economic growth in a variety of national contexts in the past and the present probably played a significant role during the Great Depression in the turn towards Keynesian interventionism by President Franklin D. Roosevelt, as well as later US administrations.

Secular Movements in Production and Prices: Their Nature and Their Bearing upon Cyclical Fluctuations (1930).

Seasonal Variations in Industry and Trade (1933).

Shares of Upper Income Groups in Income and Savings (1953).

Capital in the American Economy: Its Formation and Financing, with Elizabeth Jenks (1961).

“Quantitative Aspects of the Economic Growth of Nations, VIII: The Distribution of Income by Size,” Economic Development and Cultural Change, 11: 1–92 (1963).

Secular Movements in Production and Prices (1967).

Jewish Economies: Development and Migration in America and Beyond, Volume 1: The Economic Life of American Jewry, edited by Stephanie Lo and E. Glen Weyl (2011).

Jewish Economies: Development and Migration in America and Beyond, Volume 2: Comparative Perspectives on Jewish Migration, edited by Stephanie Lo and E. Glen Weyl (2012).

Baymul, Cinar and Kunal Sen, “Was Kuznets Right? New Evidence on the Relationship Between Structural Transformation and Inequality,” Journal of Development Studies, 56: 1643–1662 (2020).