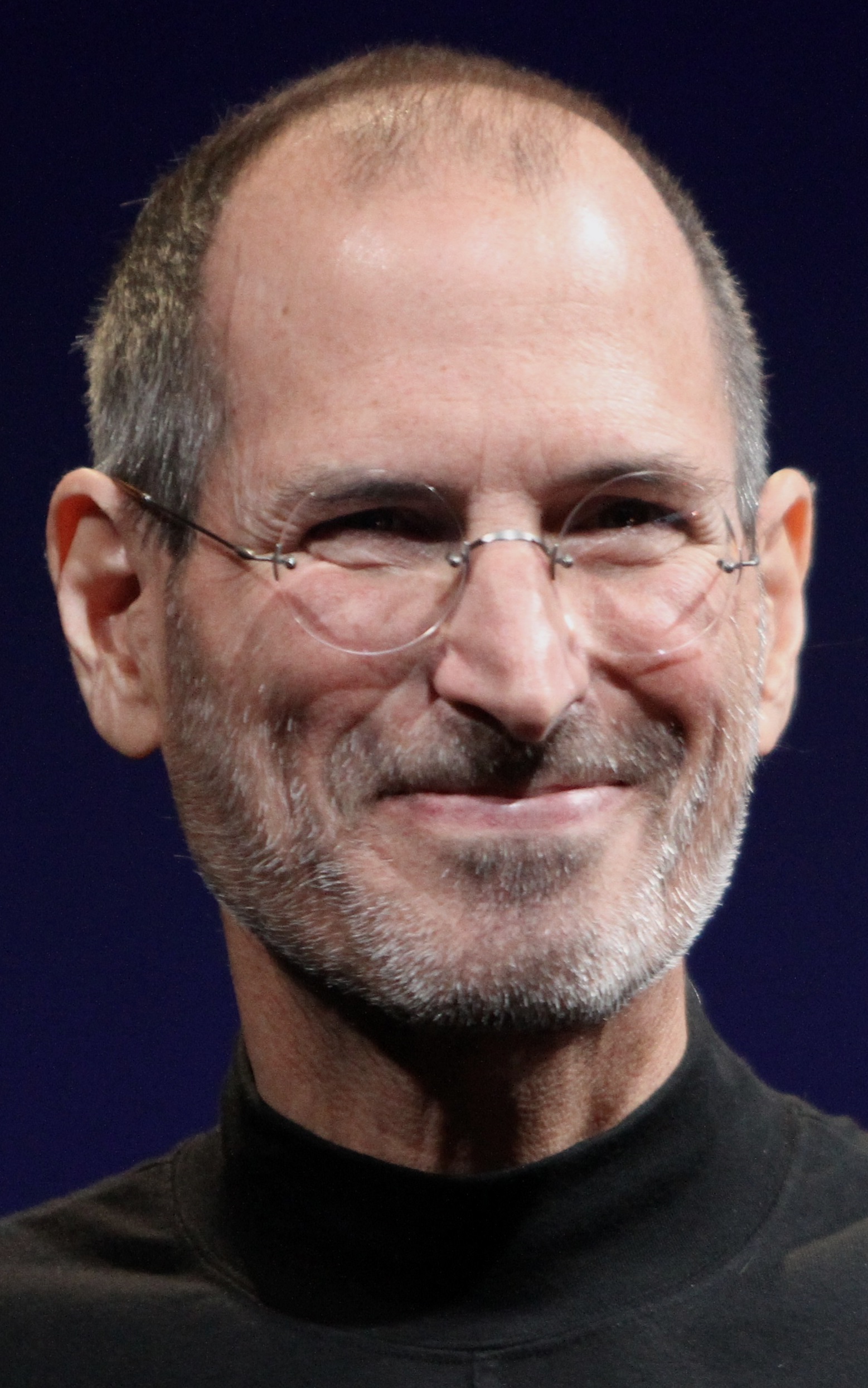 Jobs’s father was Abdulfattah Jandali, a Syrian immigrant to the US who was working as a graduate student instructor while pursuing a doctorate in political science at the University of Wisconsin at Madison.

Jobs’s mother was Joanne Schieble, an American woman of Swiss-German extraction who was a graduate student in the class Jandali taught.

Schieble’s parents were unhappy about the relationship and threatened to cut off their daughter financially if she kept the baby. For this reason, the couple gave the baby up for adoption.

The baby was adopted by Paul Reinhold Jobs and Clara Jobs (née Hagopian), who lived in Los Altos, California, near the southwestern tip of San Francisco Bay—in the future Silicon Valley—between Palo Alto and San Jose.

When Jandali finished his PhD, he initially returned home to Syria to seek employment, but Schieble did not accompany him. The couple were divorced in 1962.

The brother and sister did not meet until 25 years later. Jobs was in contact with Schieble on and off for most of his life, but never had any contact with Jandali.

Paul Jobs had a high school education. He worked as a mechanic in the Coast Guard before marrying and later in civilian life as a machinist. Clara Jobs had attended college for a while without graduating.

Steve Jobs was raised in Los Altos and the adjacent community of Mountain View. Paul and Clara adopted another child, a girl, who was two years younger than Steve. Thus, Jobs had an adoptive sister who was the same age as his biological sister—though he did not of course know that until years later.

In later life, Jobs had a very negative attitude towards his biological parents and always regarded his Paul and Clara Jobs as “1000% his parents.”

Paul Jobs set up a workshop in his garage, where he eventually allowed the young Steve to have his own workbench. In this way, the father also passed along his love of mechanics to his son.

Steve worked on fixing things around the house—cabinets, fences, and so forth—from an early age. He also learned to fix cars.

By the time Jobs was 10, he was deeply involved with electronics.

Jobs was bored in school, often got into trouble, and was bullied. His parents were naturally extremely concerned and moved several times in an effort to find a suitable school for him with their limited financial means.

Wozniak was five years older than Jobs and so left Homestead to attend the University of California, Berkeley, while Jobs was still in high school. Jobs visited Wozniak at Berkeley frequently, and experience which led him to seek out congenial company at Stanford University, which was closer to his home.

At Stanford’s Student Union, Jobs discovered an electronics club, which he was allowed to join.

Jobs was also interested in literature—probably due to his mother’s influence—and for a long time was unsure of which direction to follow in his life. During his senior year at Homestead, he enrolled in an English class at Stanford and for a while even worked on an “underground” film.

Jobs has said that he did not fit well into any social group in high school or college. He was too much the “hippie” to fit in comfortably with the “nerds,” and vice versa.

During his senior year, Jobs also began experimenting with the psychedelic drug, LSD.

In 1972, Jobs enrolled in Reed College in Portland, Oregon. However, he dropped out after one semester and for a time lived the life of a campus hanger-on, auditing classes while sleeping on friends’ sofas, cadging loose change from strangers, and obtaining free meals from the “Hare Krishna” converts.

In 1974, Jobs moved back in with his parents in Los Altos.

On the strength of a computer board programmed to play an early video game (similar to Pong) given to him by his buddy Wozniak, Jobs got a job with Atari, Inc., in Los Gatos.

For several months, while working for Atari, Jobs continued to live at home and saved up for a trip to India he had long dreamed of.

Then, later in 1974, Jobs made his way to India with a friend he had made at Reed—his future business partner Daniel Kottke—and the friends traveled around the country for seven months.

Upon returning to the US, Jobs spent time on a hippie commune in Oregon. Throughout this time, he continued to take psychedelic drugs. He also developed a serious interest in Zen Buddhism.

Jobs soon returned to living with his parents, with frequent trips to visit Buddhist centers and teachers in California, including the well-known Tassajara Center. For a time, he seriously considered studying Zen at a monastery in Japan.

In 1975, Jobs went back to work for Atari. The company gave him a special assignment that Jobs felt was beyond his technical expertise. For this reason, he turned once again to his friend Wozniak for help.

Wozniak exceeded Atari’s stringent specifications for the task, but in the end the friends felt they received only a pittance for their efforts. Thus, they remained dissatisfied and on the lookout for other business opportunities.

Meanwhile, in nearby Menlo Park, a group of computer hobbyists had come together to form the Homebrew Computer Club. Gates and Wozniak began attending their meetings in 1975—an event which was to have important consequences for the futures of both men.

Inspired by the other hobbyists of the Homebrew Club, Jobs and Wozniak decided to build their own personal computer. Originally, the idea was to produce bare printed circuit boards to sell to other computer enthusiasts.

In March of 1976, Wozniak produced the first circuit board, which the friends named “Apple I,” in honor of the apple orchard Jobs had worked in on the Oregon commune.

One month later, in April of 1976, Jobs and Wozniak—together with a third partner named Ronald Wayne, who had much-needed business experience—formed the Apple Computer Company (now Apple, Inc.).

The company was headquartered in Jobs’s bedroom in his parents’ home in Los Altos, and later moved to the garage. The friends sold many of their personal belongings to raise funds for the purchase of the materials needed to build the circuit boards.

In terms of the division of labor, Wozniak would drop by Jobs’s house once a week with his latest batch of circuit boards, while Jobs spent most of the day every day on the telephone attempting to raise venture capital to finance the transformation of Apple into a more consumer-oriented enterprise.

Jobs was successful in raising capital and a year later, in April of 1977, the friends introduced their second model, Apple II, onto the market.

For Apple II, Wozniak embedded his new and improved circuit boards inside a molded plastic body, which also contained a typewriter keyboard and connected to a color monitor.

Apple II was one of the first three personal computers, or PCs. The other two PCs also introduced in 1977 were developed by established electronics companies, namely, the Commodore PET 2001 and the Tandy Corporation (Radio Shack’s parent company) TRS 80.

The company grew so fast that it turned into an immense corporate entity that was beyond Jobs’s ability to manage personally. For this reason, in 1983, Jobs hired Pepsi-Cola’s John Sculley to serve as Apple’s CEO.

In 1984, Apple brought out the Macintosh. It was the first device to introduce such features as graphical user interface (GUI), a built-in screen, and a mouse.

In 1981, IBM had released its PC. Macintosh was intended to go head-to-head with IBM for dominance of the PC market. However, by 1985 it was obvious the attempt had failed.

This setback led to a power struggle between Jobs, Sculley, and Apple’s board of directors. In 1988, Jobs chose to resign from the company he had founded.

Jobs subsequently founded a company called NeXT Inc. The NeXT workstation was marketed as an “interpersonal” computer, meaning that it was specialized for local network communications.

NeXT got high marks from critics for its technical innovations, notably, its software based on object-oriented programming (OOP). Jobs marketed NeXT, not to ordinary consumers, but rather to scientists, other academics, and financial experts.

Other business ventures that Jobs embarked upon at this time include Pixar, an early computer graphics company servicing the film industry.

During the decade that Jobs was away from Apple, the company’s profitability had sagged. In 1997, tge Apple management bought NeXT, as part of a deal which brought Jobs back to the helm of his old company. In 2000, Jobs was confirmed as Apple’s CEO once again.

In 2007, under Jobs’s guidance, Apple introduced the pathbreaking iPhone, which both turned the company’s fortunes around and revolutionized the way people live their daily lives throughout the world.

In 2011, at the age of only 56, Jobs died from pancreatic cancer and comorbidities. He is estimated to have been worth more than $10 billion.

Selected Books About Jobs and Apple

Beahm, George, Steve Jobs’ Life by Design: Lessons to be Learned from His Last Lecture (2014).

Brennan, Chrisann, The Bite in the Apple: A Memoir of My Life with Steve Jobs (2013).

Gallo, Carmine, The Presentation Secrets of Steve Jobs: How to Be Insanely Great in Front of Any Audience (2009).

Gold, Steve, Steve Jobs: The Biography and Lessons of the Mastermind Behind Apple (2016).

Isaacson, Walter, The Innovators: How a Group of Hackers, Geniuses, and Geeks Created the Digital Revolution (2014).

Levy, Lawrence, To Pixar and Beyond: My Unlikely Journey with Steve Jobs to Make Entertainment History (2016).

MacGregor, J.R., Steve Jobs: The Man Behind the Bitten Apple: Insight into the Thoughts and Actions of Apple’s Founder (2018).

Mickle, Tripp, After Steve: How Apple Became a Trillion-Dollar Company and Lost Its Soul (2022).

Schlender, Brent and Rick Tetzeli, Becoming Steve Jobs: The Evolution of a Reckless Upstart into a Visionary Leader (2015).