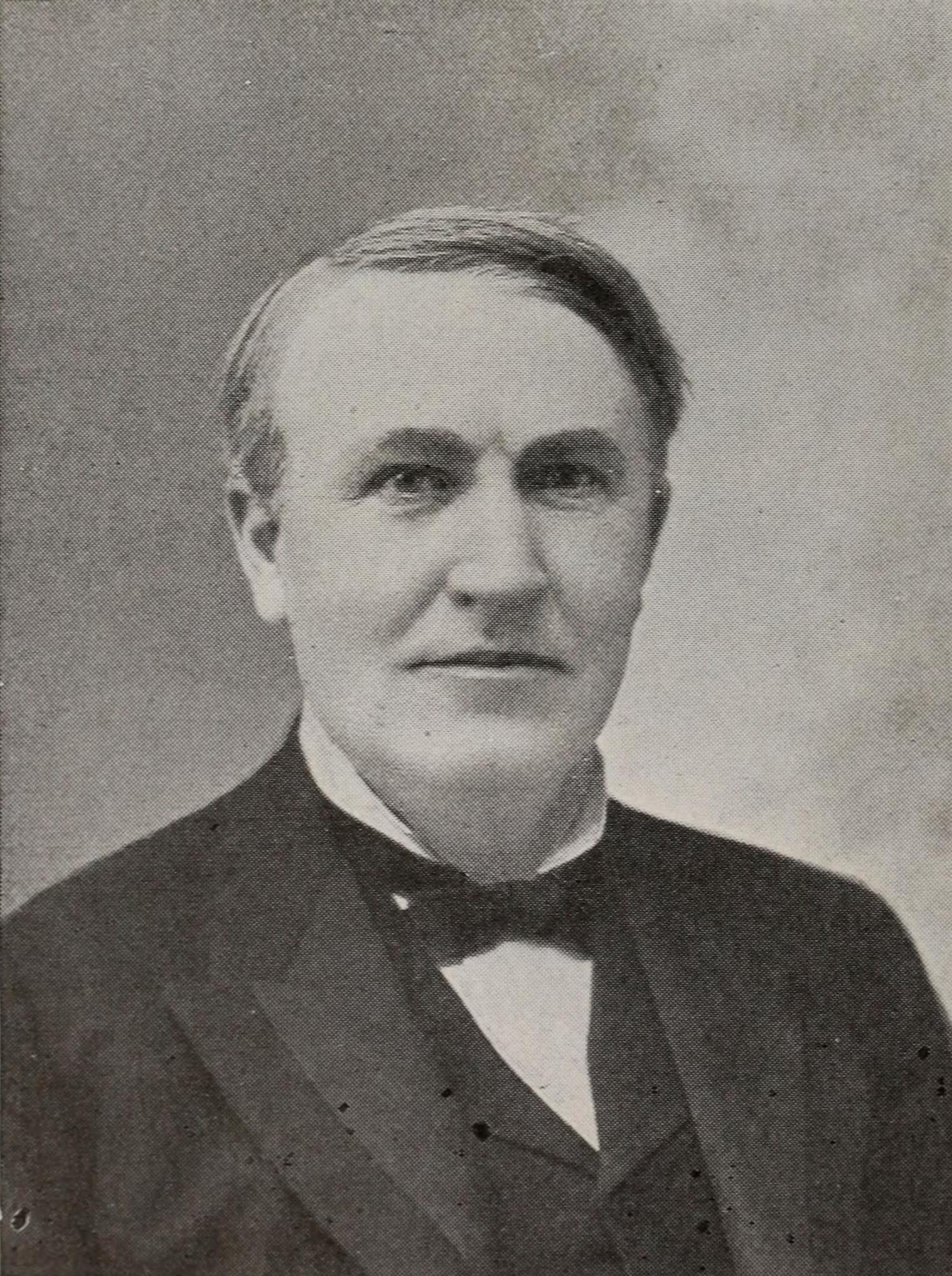 In 1854, when Edison was seven years old, the family relocated to Port Huron, Michigan, a city at the southern tip of Lake Huron.

Port Huron lies on the western shore of the St. Clair River—which forms the international border between the US and Canada—opposite Sarnia, Ontario. The city is about 60 miles north of Detroit.

Edison was of Dutch extraction on his father’s side. The family name was originally spelled “Edeson.”

The Edesons had originally settled in New Jersey, but Thomas’s grandfather was a Loyalist who had to flee to Canada in 1784 to avoid reprisals in the aftermath of the American Revolution.

Ironically, Edison’s father, though born in Nova Scotia, had to flee back across the border to the US in 1837 as a result of being on the losing side of a political uprising in Canada.

Edison’s father did not have a fixed profession, working from time to time as a shingle-splitter, a tailor, and a tavern-keeper. Edison’s mother, who hailed from upstate New York, worked as a schoolteacher before her marriage.

The young Edison was homeschooled by his mother. He attended public schools for only a few months altogether.

Edison is said to have been extremely curious as a child. He began doing experiments at home from an early age and would regularly seek out books to learn on his own about any subject that roused his curiosity.

As a child, Edison came down with scarlet fever. Most scholars believe this was the cause of the hearing problems he began to experience around the age of 12 and which plagues him more and more as time went by.

By the time he was an adult, Edison was completely deaf in one ear and had limited hearing in the other.

During the early 1870s, when he was in his mid-twenties, Edison took a course in chemistry at the Cooper Union for the Advancement of Science and Art in New York City.

This course was Edison’s only known exposure to higher learning.

In 1860, at the age of 13, Edison obtained his first job selling newspapers, cigarettes, and other items on the railroad carriages that ran between Port Huron and the city of Detroit.

Edison later said that he spent most of his earnings on equipment for his electrical and chemical experiments.

Two years later, in 1862, Edison saved the life of a three-year-old child who had wandered onto the tracks as a train was arriving. The child’s father, who happened to be the stationmaster at the Mount Clemens station along the Port Huron–Detroit line, was naturally extremely grateful.

To repay his debt, the stationmaster personally trained Edison to be a telegraph operator. The latter practiced his new art in Port Huron and in Stratford, Ontario, on Canada’s Grand Trunk Railway.

Edison next purchased the right to sell newspapers along the major Canadian railway line. In addition, he hired four assistants, who helped him produce a newspaper called the Grand Trunk Herald, which Edison sold on the trains along with the other newspapers.

This was the first of Edison’s many business enterprises.

In 1866, when he was 19, Edison obtained a position with Western Union in Louisville, Kentucky, where his main job was to monitor the Associated Press news bureau’s wire feed.

Edison asked to work the night shift so that he could continue to read and experiment in between messages. However, this arrangement cost him his job the next year, in 1867, when he accidentally spilled battery acid on the floor, which leaked through to his boss’s office just below.

In 1869, Edison moved to New York City in search of greater opportunities to develop his talents as an inventor and businessman. A mentor and friend of Edison’s named Franklin Leonard Pope allowed him to set up a laboratory in his basement in Elizabeth, New Jersey, opposite Staten Island.

Soon, Edison and Pope formed an engineering partnership, which they called Pope, Edison & Company Electrical Engineers. However, the partnership proved to be short-lived.

During this period, Edison made several inventions, including the one-wire telegraph—later known as the “stock-ticker”—and a multiplex telegraph system, which allowed first two, and later four, messages to be sent or received simultaneously.

The four-way (“quadruplex”) telegraph, which he invented in 1874, made Edison a wealthy man.

Two years later, in 1876, Edison invested his newfound riches in constructing the world’s first industrial research laboratory—that is, a laboratory dedicated to developing practical, commercial applications of scientific research—at Menlo Park, New Jersey, a hamlet in what was then Raritan Township and is now Edison Township, roughly halfway between Metuchen and New Brunswick.

Edison hired the best electrical engineers he could find to work at Menlo Park, notably, William Joseph Hammer, who concentrated his efforts on creating a commercially viable incandescent electric lamp.

Many other top-flight engineers and mathematicians were employed at Menlo Park. Nevertheless, Edison’s name was on most of the patents created by the lab—some 1,093 in all.

The list of path-breaking inventions attributable to Edison’s genius, in one way or another, include the following:

We stress that this is only a partial list of Edison’s pioneering inventions.

Each of these inventions has its own complex history and would be worthy of its own article. To take just one example, the development of a commercially feasible incandescent light bulb is particularly interesting and instructive.

That a heated wire may give off light was first demonstrated as far back as 1761. The English chemist Humphry Davy passed an electric current through a platinum wire to create light in 1802. And in 1838, the wire (or “filament”) was first placed inside a vacuum tube to extend its life and for safety’s sake.

However, none of these early experiments created a light that was bright enough or long-lasting enough to be of practical use.

By 1860, the English physicist Joseph Swan developed a promising system consisting of an evacuated glass bulb with a carbon filament. However, the vacuums that Swan was working with were imperfect and he put the work aside for the time being.

Then, in the 1870s, Swan used a much-improved vacuum pump to create a bulb containing so little oxygen that the filament could incandesce at a high temperature, which made it capable of giving off a bright light without catching fire.

Beginning in 1878, Edison basically took Swan’s work and concentrated the facilities of Menlo Park on a single problem: finding the ideal material for the filament.

In 1879, after trying hundreds of different carbon-based and metallic materials, Edison’s team created a carbonized bamboo filament that burned brightly for over 1,200 hours. This was the first incandescent light bulb that went on to be successful in the commercial sense.

Finally, in the 1900s, it was discovered that filaments made from the metal tungsten were far superior to the earlier Edison light bulb.

When one reflects that there is a similar story behind each of the inventions on the bulleted list above, it is difficult to imagine the magnitude of the intellectual, physical, and emotional effort that went into each of Edison’s major inventions.

Nevertheless, despite all of this creative intellectual toil, Edison did occasionally experience failure.

First, Edison’s faith in direct current (DC) as the basis for long-distance electrical power generation proved to be misplaced, for technical reasons. Edison’s main competitors, Nikola Tesla and George Westinghouse, were both developing systems on the basis of alternating current (AC), leading to the so-called “Current Wars.”

In 1892, with an assist from financier J.P. Morgan, Edison lost the controlling interest in his own company, General Electric—which is still one of the largest publicly traded companies in the world.

Second, in 1903, Edison abandoned his work on fluoroscopy, when he himself suffered eye damage and an assistant died from over-exposure to X-rays.

In 1886, Edison bought an estate in Fort Myers, Florida, in the southwestern part of the state. He and his second wife began to spend their winters there.

Edison also set up a laboratory in Fort Myers, where he oversaw experiments with rubber plants intended to make rubber for automobile tires more easily available and hence cheaper in the US.

A few years later, Henry Ford became a neighbor of Edison’s in Fort Myers, and the two giants of industry became fast friends. They often went on camping trips together through the backwoods of Florida, sometimes in the company of automobile-tire magnate, Harvey S. Firestone.

Edison was a doer, not a thinker.

That said, he was not quite the untutored scientific naïf that he sometimes pretended to be.

For example, scholars who have studied Edison’s working notebooks at Menlo Park have been surprised by the extent to which he was capable of casting his creative ideas into formal, mathematical form.

If Edison’s genius may be summarized at all, it may perhaps be best expressed by a famous saying of the great English painter and aesthetician, Joshua Reynolds, which Edison posted throughout the various labs at Menlo Park:

There is no expedient to which a man will not resort to avoid the real labor of thinking.

Davis, L.J., Fleet Fire: Thomas Edison and the Pioneers of the Electric Revolution (2003).

Freeberg, Ernest, The Age of Edison: Electric Light and the Invention of Modern America (2013).

Jonnes, Jill, Empires of Light: Edison, Tesla, Westinghouse, and the Race to Electrify the World (2003).

Ogaz, Hanh, The Real Thomas Edison: A Life from Beginning to the End of an Inventor (2021).

Winchell, Mike, The Electric War: Edison, Tesla, Westinghouse, and the Race to Light the World (2019).