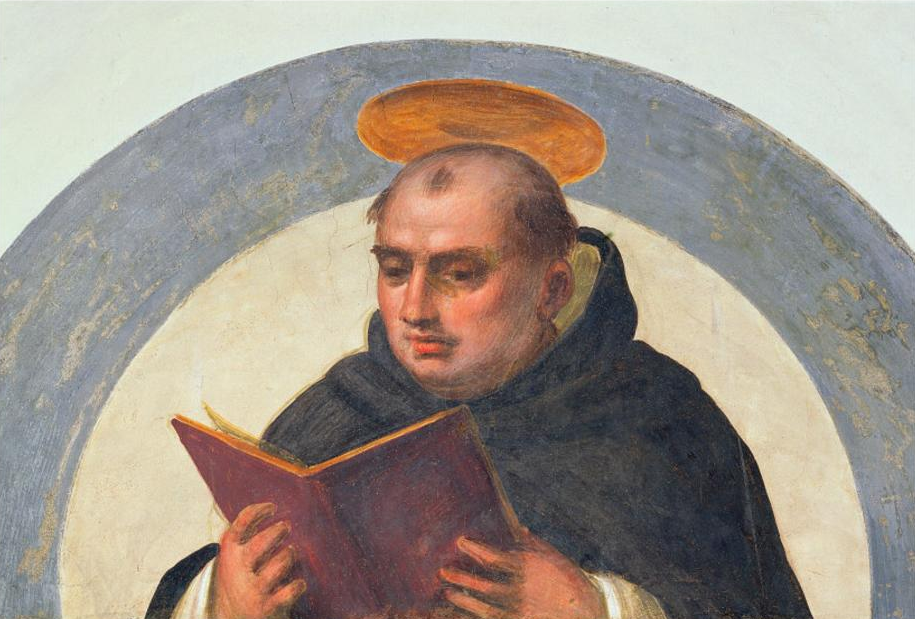 Thomas Aquinas (1225–1274) was born on his aristocratic family’s estate at Roccasecca, near the town of Aquino, about halfway between Naples and Rome.

Aquinas’s father was a knight in service to Frederick II, Holy Roman Emperor and King of Italy, among his many titles.

One of Aquinas’s father’s brothers was abbot of the then-700-year-old Benedictine monastery at Monte Cassino, about 80 miles southeast of Rome. For this reason, even though all of Aquinas’s brothers went into soldiering, his parents groomed him to follow in his uncle’s footsteps.

At the tender age of five, Aquinas was sent to Monte Cassino to begin his studies for the priesthood and a career in the Church under his uncle’s supervision.

In 1239, when Aquinas was 14, fighting between Frederick II and Pope Gregory IX engulfed the region around Monte Cassino, and Aquinas’s uncle sent him to Naples to continue his education at the stadium generale that had recently been established there by Frederick. (Studium generale is an early name for “university.”)

It was probably at the Naples stadium generale that Aquinas first became acquainted with major works by Aristotle, Avicenna, Averroës, Maimonides, and other philosophers who were being translated into Latin at that time.

In 1244, at the age of 19, Aquinas joined the Dominican monastic order, which had been established a little less than 30 years earlier, in 1216.

Aquinas’s family was not happy with this decision, which seemed to them to preclude the sort of brilliant ecclesiastical career that would have been open to him if he had joined the much better-established and relatively more worldly Benedictine order.

In desperation, Aquinas’s parents held him prisoner for a year in the family castle at Roccasecca. In an incident recorded in the official records of his later canonization, two of Aquinas’s brothers hired a prostitute and sent her into Aquinas’s chambers. However, he seized a burning brand from the fireplace, drove the woman out, and drew a cross on the wall with the burned stump of the brand.

The family finally accepted that their opposition to Aquinas’s calling was futile. To save face, they allowed Aquinas to escape.

After his release, Aquinas traveled first to Naples and then to Rome to consult with the leaders of the Dominicans. The Order decided to send him to the University of Paris for further education.

In 1245, Aquinas arrived in Paris, where he began his higher studies under the German theologian and philosopher, Albertus Magnus (“Albert the Great”). Three years later, in 1248, Albert was sent back home to Cologne, where a new stadium generale had recently been established.

Aquinas accompanied his teacher to Germany, serving as his assistant with the title of magister studentium [master of students]. When some of Aquinas’s fellow students complained of his taciturnity, Albert is supposed to have replied:

You call him the “dumb ox,” but in his teaching he will one day produce such a bellowing that it will be heard throughout the world.

While in Cologne, Aquinas earned his bachelor’s degree and began to lecture in his own right.

In 1252, Aquinas returned to Paris to study for his master’s degree in theology. His early commentaries on the Bible and on Peter Lombard‘s Sentences date from this period. His important early work, De ente et essentia [On Being and Essence], also dates from this time.

In 1256, Aquinas obtained his master’s degree and was appointed a regular faculty member of the theology faculty at the University of Paris.

During the next three years, Aquinas composed a number of important works, from the Quaestiones disputatae de veritate [Disputed Questions on Truth] to the Commentary on Boethius’s De hebdomadibus [On the Seven Days of Creation].

In 1259, the Dominicans sent Aquinas back to Italy, where over the next nine years he taught at the Order’s schools in Naples, Rome, and Orvieto, a town north of Rome. During this period of his life, Aquinas penned one of his most important works, the Summa Contra Gentiles [Summation Against the Unbelievers].

In 1268, Aquinas was sent back to Paris by his order. This time he had a higher profile and incurred the professional jealousy and intellectual opposition of various opponents.

Among these opponents, we may note the Franciscan Order (to which Aquinas’s rival theologian/philosophers, Bonaventure and Duns Scotus, belonged), as well as some conservative theologians (especially, among the Augustinian Order), who were troubled by the use Aquinas had made of the pagan philosophers, Aristotle and Averroës.

In 1270, the Bishop of Paris, Étienne Tempier, condemned thirteen propositions maintained by Aristotle and Averroës as heretical.

This was a serious business, as anyone found guilty of supporting the condemned propositions would be excommunicated. For this reason, Aquinas had to spend time and energy on composing polemical works to defend himself from the accusation of supporting these propositions.

In 1272, Aquinas left Paris (not without some relief, one imagines) in order to found a new stadium generale of his own in Naples. In late 1273, in Naples, Aquinas had a number of mystical experiences, notably one in which he wrote that:

A few months later, in the spring of 1274, Aquinas was injured by a branch while traveling on a donkey. Sometime later, he felt unwell and died after a few days’ illness.

At his death, Aquinas left behind the massive, but unfinished, manuscript of his masterwork, the Summa Theologiae [Summation of Theology].

Most of Aquinas’s ideas on political economy are presented within the compass of only a few pages of his massive Summa Theologiae (see below).

The Summa Theologiae is a highly systematic treatise presented in Scholastic question-and-answer format. The main discussion of economic matters occurs in IIaIIae (the second part of the second part), notably, in the following Questions:

These and other relevant discussions occur within the context of Aquinas’s treatment of the virtue of justice in the so-called “Treatise on Prudence and Justice” (these being the first two of the four classical or “cardinal” virtues).

Justice is, of course, an other-directed or “social” virtue. It is for this reason that the discussion of the virtue of justice extends from individuality morality to politics, law, and economics.

Aquinas makes a distinction between the “just” price of a good (also called the “natural” price) and what we would call its “market price.” He says that justice demands that neither party benefit “unjustly,” as this would amount to the “fraudulent” manipulation of the other person.

While this sounds simplistic, Aquinas’s view of the factors that contribute to the just price is in fact quite complex. In our terms, he has a hybrid theory of value that is partly based on the Marxian-style “labor” theory and partly on the Austrian-style “subjective” theory.

That is to say, in calculating the just price of something Aquinas recognizes a role both for the cost of the labor and other expenses that went into its production and for the quality (or usefulness or worth) of the thing as determined by the needs of the prospective buyer or by generally accepted standards.

Aquinas was also prepared to make room for values other than what we might consider to be “utility-maximizing.” For example, he writes that:

Here, a notion of aesthetics that is clearly “subjectivist” is complementing the notion of usefulness.

Like most ancient and medieval authors before and after him, Aquinas was steadfastly opposed to lending money for interest (usury). On this topic he could not be clearer:

. . . to take usury for money lent is unjust in itself, because this is to sell what does not exist, and this evidently leads to inequality which is contrary to justice.

In sum, Aquinas’s primary concern in his writings on economics is for justice, which for him means, not each one receiving an equal share of something, but rather each one receiving his due according to his worth or merit or desert.

However, in economic transactions the two parties are assumed to be equal in desert and thus to be due equal shares, meaning they ought to receive equal value in any exchange.

Above all, Aquinas wants to ensure that any hint of manipulation or fraud of one party by the other be studiously avoided in all economic transactions.

The Economics-Related Work of Aquinas

The primary source for Aquinas’s economic thought is:

Complete edition of the Summa Theologiae in English:

The Summa Theologica of St. Thomas Aquinas, Complete English Edition in Five Volumes, translated by the Fathers of the English Dominican Province (1948).

English editions of extracts from the Summa Theologiae containing some or all of IIaIIae, QQ. 61, 66, 77, and 78:

Boland, Donald, Economic Science and St. Thomas Aquinas: On Justice in the Distribution and Exchange of Wealth (2019).

Franks, Christopher A., He Became Poor: The Poverty of Christ and Aquinas’s Economic Teachings (2009).

Hirschfeld, Mary L., Aquinas and the Market: Toward a Humane Economy(2018).

Miller, Shawn T., Personal Economics: Economic Freedom and Work are Conducive to the Development of a Human Person (2021).