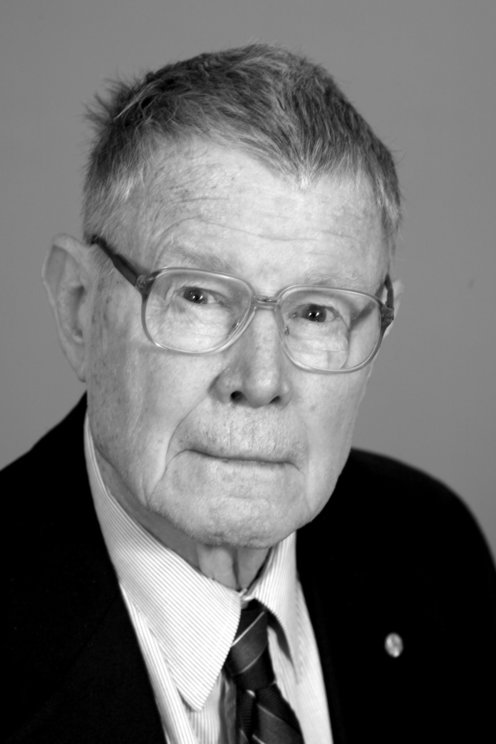 Thomas Crombie Schelling (1921–2016) was born in Oakland, California. His father was a career officer in the US Navy.

As a result of his father’s profession, Schelling’s family moved around quite a bit during his boyhood, including one two-year stint in the Panama Canal Zone. The young man graduated from high school in San Diego.

For college, Schelling attended the University of California, Berkeley, where he studied economics. During his undergraduate years, he took two years off to live in Chile.

In 1944, Schelling obtained his bachelor’s degree in economics from Berkeley.

Upon graduation, Schelling took a job as an analyst with the US Bureau of the Budget.

Schelling then decided to attend graduate school and was accepted by Harvard University in Cambridge, Massachusetts. He sat for his qualifying exams in 1948.

Appointed a Junior Fellow of the Harvard Society of Fellows, Schelling next took a job working in Europe for the Marshall Plan. It was during his stay in Europe that he wrote most of his doctoral dissertation at night. The subject of the dissertation was national income behavior.

In 1950, Schelling joined the White House Staff of the foreign policy adviser to the President. The following year, the group he worked for was rechristened the Office of the Director for Mutual Security, which was the office in charge of all foreign aid programs.

In 1953, after three years of government service, Schelling accepted his first full-time academic position at Yale University in New Haven, Connecticut, where he taught for the next five years.

In 1955, Schelling finally received his PhD in economics from Harvard University.

Schelling’s work with the Marshall Plan in Europe and in government service in Washington had mostly to do with negotiations.

This perhaps explains why, in his first publications as a professional economist, he did not develop the ideas presented in his doctoral dissertation—as many academics are wont to do—but rather struck out in a new direction: the theory of bargaining.

Together with his absorption of previous work on game theory, which Schelling has stated he discovered in 1957, this work set him on the course which led to his Nobel Prize, which he was awarded, according to the selection committee, for his “contributions to understanding cooperation and conflict.”

In 1956, Schelling first became associated with the RAND Corporation, then headquartered in Santa Monica, California. He maintained his RAND connections off and on over the years, sometimes as an adjunct fellow, something in a full-time research position.

In 1958, Schelling left Yale to go travel to England, where he made numerous contacts in London. At the end of the year, he took up a position as a professor of economics back at Harvard.

A decade later, 1968, Schelling moved laterally to join the faculty of the newly created John F. Kennedy School of Government at Harvard.

Schelling retired from active teaching at Harvard in 1990, assuming the title of Lucius N. Littauer Professor of Political Economy, Emeritus.

In 1990, Schelling accepted a joint appointment as Distinguished University Professor at the University of Maryland, in both the Department of Economics and the School of Public Policy.

In 2005, Schelling shared the Nobel Memorial Prize in Economic Sciences with Robert Aumann.

As already mentioned, Schelling is known primarily for his seminal studies of the quintessentially economic phenomenon of bargaining, especially in relation to game theory, to which he made important early contributions.

Schelling’s very first publications, his “Essay on Bargaining” in 1956 and his “Bargaining, Communication, and Limited War” in 1957, reflect his earliest thoughts on this important subject (see “Selected Works by Schelling” below).

However, when Schelling wrote these pioneering papers, he had not yet discovered game theory. He has stated that he first encountered the literature on game theory in 1957.

As a result of doing so, Schelling had the insight which lay at the heart of most of the rest of his career, namely, that game theory is the perfect formalism for giving rigorous expression to his ideas about bargaining.

This new insight led to his magisterial third publication, “The Strategy of Conflict: Prospectus for a Reorientation of Game Theory” in 1958.

All of the previous work was synthesized in Schelling’s first monograph, The Strategy of Conflict, published in 1960 (see below).

Among the characteristic ideas advanced in this masterwork are the following ideas:

Over the course of his career, Schelling wrote mostly about the application of the theory of bargaining as outline above to international relations.

However, Schelling also applied his insights to a variety of other topics, including arms control negotiations, racial segregation, government-run healthcare, greenhouse gas reduction, and others.

Thinking Through the Energy Problem (out of print) (1979).

Choice and Consequence: Perspectives of an Errant Economist (1984).

Strategies of Commitment and Other Essays (2006).

Securing Peace in the Middle East: Project on Economic Transition, with Stanley Fischer (1994).

Dodge, Robert V., The Strategist: The Life and Times of Thomas Schelling (out of print) (2006).

Scheithauer, Anna, The Korean War: A Reflection upon the Importance of Limits in Warfare with Thomas C. Schellings Bargaining Framework (2009).