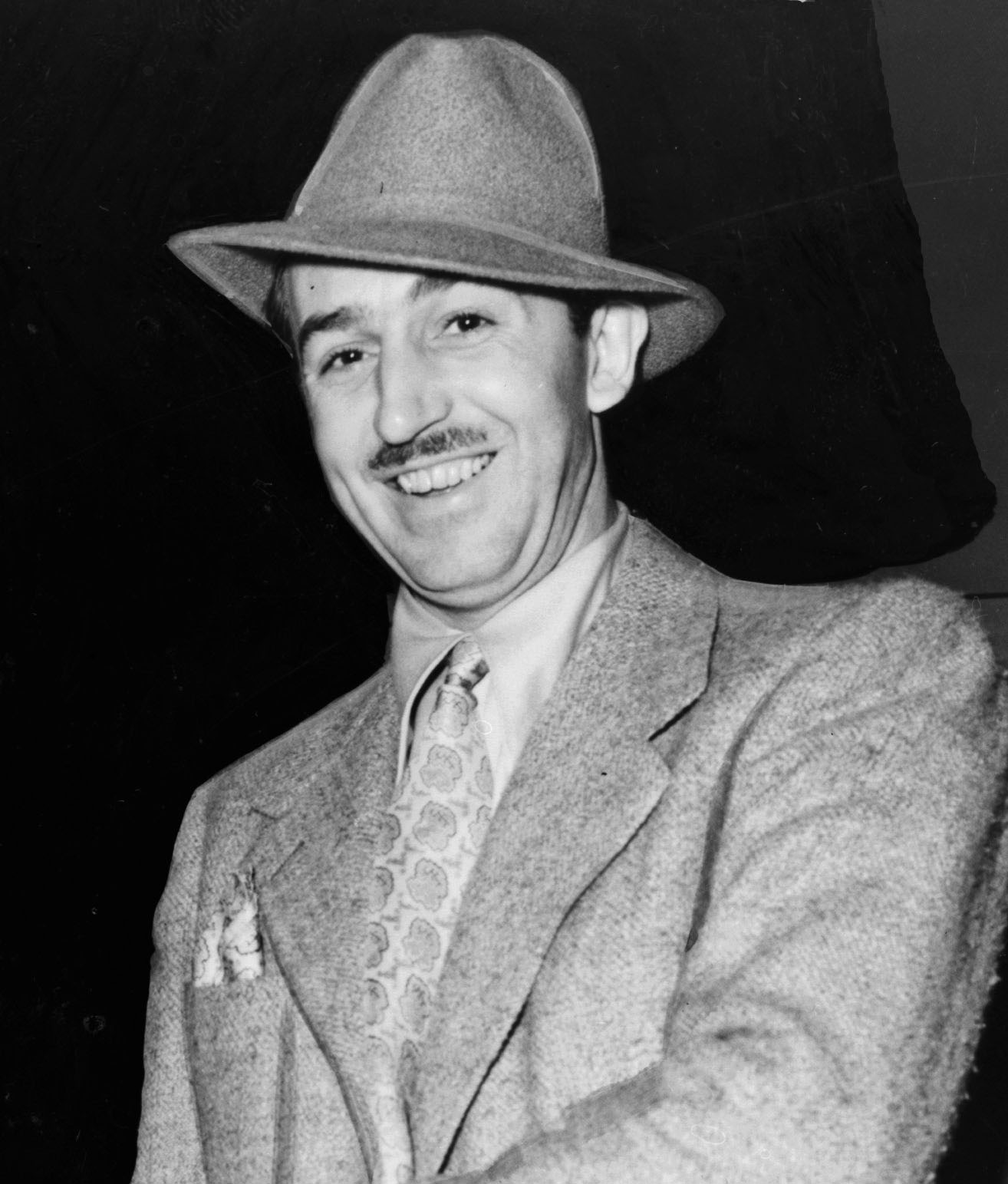 Walter Elias Disney (1901–1966) was born in the Hermosa neighborhood on the Northwest Side of Chicago, Illinois.

Disney’s father was born in Canada into a family of Irish immigrants. His mother had both English and German ancestors.

In 1906, Disney’s family moved to a farm near Marceline, Missouri, a small town near the halfway point of the railway line connecting Hannibal to Saint Joseph. The farm belonged to one of his uncles.

As young child, Disney displayed a marked talent for drawing. He drew horses and other animals he lived among on the farm and copied cartoons out of the local newspaper his parents subscribed to.

In addition to pencil sketches, Disney made many crayon and watercolor pictures while still in elementary school.

In 1911, the Disney family relocated to Kansas City, Missouri. While attending public school in KC, Disney became friends with a boy whose family were vaudeville and film fans. Through them, he began to become acquainted with show business and the motion picture industry, then still in its infancy but growing rapidly.

The young Disney was full of energy and ambition. During his school years in KC, Disney and one of his brothers delivered newspapers after school for six years to earn pocket money. Then, in the evenings he worked on a correspondence course to learn the art of cartooning.

For a while, Disney also took courses on Saturdays at the Kansas City Art Institute.

In 1917, the family moved back to Chicago. The now-16-year-old Disney was appointed the cartoonist for his high school newspaper, whereupon he spent the remainder of World War I drawing patriotic cartoons in support of the doughboys.

In 1918, Disney attempted to enlist in the US Army to help the war effort in a more concrete way, but he was still only 17 years old and was rejected as too young. He then applied to the American Red Cross with a doctored birth certificate, which made him out to be a year older, and was accepted.

Disney was trained as an ambulance driver and was shipped to France, but only arrived in November, after the Armistice. While abroad, Disney decorated his ambulance with cartoons, some of which were published in the Army newspaper, Stars and Stripes.

After spending a year in Europe, Disney left the Red Cross and returned to Kansas City in late 1919. He got his first job with a commercial art studio, where he drew illustrations for advertisements, theater programs, and catalogues.

It was at this studio in KC that Disney befriended the German-American artist, Ubbe Ert Iwwerks, known professionally as “Ub Iwerks.”

In early 1920, Disney and Iwerks left he studio and set up their own short-lived studio, called the “Iwerks-Disney Commercial Artists.”

However, the new company foundered for lack of customers. Disney was the first to leave, seeking employment with another Kansas City ad company. Iwerks followed Disney shortly afterwards.

It was at this second studio that Disney was introduced to animation, especially the “cutout animation” technique (an early form of “stop-motion” animation).

The young man became fascinated by the possibilities of animation. He read books on the subject and experimented with a camera at home in his free time.

Disney eventually came to the conclusion that “cel” (short for “celluloid”) animation was the most promising technique.

Disney was unable to convince his employer to let him switch to the cel technique on an experimental basis. For this reason, he decided to try to go it alone once again, this time with a different co-worker, by the name of Fred Harman, as a partner.

The short, animated films they created were mostly bought by Kansas City’s venerable Newman Theater. In the beginning, Disney based many of their plots on Aesop’s Fables.

Disney and Harman dubbed their cartoons “Newman Laugh-O-Grams” and founded a joint business venture, the Laugh-O-Gram Studio, in 1921.

In 1923, the studio undertook an ambitious project involving 12-and-a-half-minute film called Alice’s Wonderland, combining animation and live action. Based loosely on Lewis Carroll’s 1865 children’s classic, Alice’s Adventures in Wonderland, unfortunately, Disney’s longest and most-ambitious film up to that point was unfortunately not a commercial success.

It now became apparent that Disney had expanded the Laugh-O-Gram Studio too rapidly: the company was forced into bankruptcy later in 1923.

Disney now pulled up stakes and—only a few weeks shy of his 22nd birthday—set out for Hollywood, where his older brother, Roy O. Disney, lived. He also had the vague intention of seeking employment as a director of live action films.

Late in 1923, Disney found a new customer who was interested in purchasing Alice’s Wonderland. The customer went on to sign a contract for a series of new films starring “Alice” according to the same mixed, animated/live action formula. Eventually, nearly 50 new Alice films were created over the next four years, between 1924 and 1927.

After the series of Alice films, Disney decided to return to an all-animated format. Working closely with Ub Iwerks, Disney came up with the character who eventually became known as “Mickey Mouse.”

Iwerks is usually credited with giving Mickey his basic shape and visual appearance, while Disney provided the text, as well as Mickey’s voice. In 1928, Mickey premiered in the eight-minute, animated “talkie” titled Steamboat Willie, the first post-produced sound cartoon.

After the success of Steamboat Willie, Disney began working with Universal Pictures, who were able to provide him with better musical production and a more-sophisticated sound recording system. With Universal’s help, the studio put out the technically superior and highly popular “Silly Symphony” series of some 75 short, animated films between 1929 and 1939. Many consider the highlight of the series to be the 1933, eight-minute, color film, The Three Little Pigs.

The Disney studio continued to expand its repertoire with new characters. For example, Goofy was introduced in 1932 and Donald Duck in 1934. The studio’s first color cartoons was released in 1932.

Disney—never one to rest on his laurels—began to chafe at the formulaic nature of the short-form cartoons his studio was producing. He envisioned a full-length, animated, feature film.

After four years of careful planning and meticulous production, in 1937 the Disney studio released Snow White and the Seven Dwarfs, based on the famous Brothers Grimm fairy tale.

Before the film was released, the rumor mill called the project “Disney’s Folly” and predicted the film would bankrupt the company.

In fact, however, Snow White and the Seven Dwarfs converted the critics and won the hearts of audiences worldwide. Within two years, it had grossed $6.5 million, making it the most successful sound film in history up to that time.

The astonishing success of Snow White and the Seven Dwarfs inspired the Disney studio to create several more full-length, animated features, including, notably, Pinocchio and Fantasia, both released in 1940. However, partly due to the outbreak of World War II, these films were not financially successful.

That same year, Walt and Roy Disney took the company public in order to raise money to deal with their financial difficulties. The success of their next full-length feature, Dumbo, released in the fall of 1941, also helped turn the situation around.

Within a couple of months, the attack on Pearl Harbor occurred and the US entered World War II. The Disney company formed the “Walt Disney Training Films Unit” to produce instruction films for inductees into the military. Donald Duck cartoons were also enlisted to help sell war bonds.

The company’s next animated feature film was Bambi, released in 1942. Now widely regarded as one of Disney’s most beloved films, it did not do well financially upon its original release during wartime.

To help with the bottom line, the company began producing a series of short (two-reel), live-action, nature films.

Nonetheless, Disney still believed in the fully animated, feature-length format. The studio’s next such film was Cinderella, released in 1950. The film was Disney’s first big critical and popular success in a decade or more, helping to reverse the studio’s declining financial fortunes.

Disney now felt secure about the direction of the company and the ability of the studio to produce top-quality feature films with little oversight by film. As a result, he began to spend more of his time on the development of other business projects, especially an idea he had been thinking about for some years—an amusement park thematically based on the Disney studio’s repertoire of characters.

Disney bought a site in the Los Angeles suburb of Anaheim. Ground was broken in 1953 and two years later, in 1955, the new theme park—dubbed Disneyland—opened its doors.

Almost immediately, Disneyland caught on with the public and became an immense money-making machine for the Disney company. The studio’s days of financial trouble were finally over.

After Disney’s death two years later, the company abandoned animated, feature-length films for more than two decades, until the Little Mermaid was successfully released in 1989, ushering in what came to called the “Disney Renaissance.”

Also, beginning in 1954 and extending all the way to the present day, the Disney company produced a regular anthology television series, showcasing a wide variety of animated, live-action feature, and documentary short films. The series underwent a number of name changes over the years, including, notably, Walt Disney’s Wonderful World of Color (1961–1969) and the Wonderful World of Disney (1991–present).

In late 1965, shortly before Disney’s death, plans to develop a second major theme park were made public. Located in Orlando, Florida, and opening in 1971, Disney World eventually eclipsed Disneyland in number of visitors and revenue-generation.

Walt Disney’s Words: The Official Walt Disney Quote Book: Over 300 Quotes with Newly Researched and Assembled Material by the Staff of the Walt Disney Archives (2023).

Barnes, Jeffrey A., The Wisdom of Walt: Leadership Lessons from the Happiest Place on Earth (2015).

Finch, Christopher, The Art of Walt Disney: From Mickey Mouse to the Magic Kingdoms and Beyond (2011).

Gabler, Neal, Walt Disney: The Triumph of the American Imagination (2006).

Goldberg, Aaron H., The Disney Story: Chronicling the Man, the Mouse and the Parks (2016).

Iger, Robert, The Ride of a Lifetime: Lessons Learned from 15 Years as CEO of the Walt Disney Company (2019).

Kern, Kevin M., Tim O’Day, and Steven Vagnini, A Portrait of Walt Disney World: 50 Years of The Most Magical Place on Earth (2021).

Kurtti, Jeff, Vanessa Hunt, and Paul Wolski, The Disney Monorail: Imagineering a Highway in the Sky (2020).

Mannheim, Steve, Walt Disney and the Quest for Community (2002).

Watts, Steven, The Magic Kingdom: Walt Disney and the American Way of Life (1998).

Williams, Pat and James Denney, How to Be Like Walt: Capturing the Disney Magic Every Day of Your Life (2004).