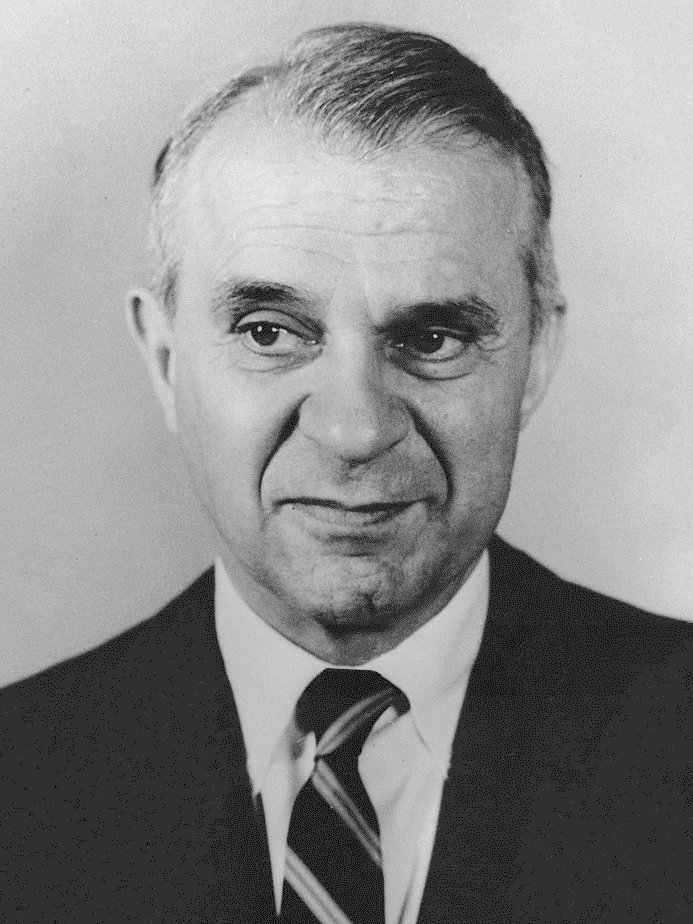 Wassily Wassilyevich Leontief (1905–1999) was born to Russian parents then living temporarily in Munich, Germany. (Note that Leontief’s German connections explain the peculiar Romanization of the Cyrillic version of his first name and patronymic.)

Leontief’s father was a merchant from a family of Russian “Old Believers” established in St. Petersburg since the eighteenth century. His mother was from a wealthy Jewish family in Odessa.

In 1921, at the age of about 16, Leontief matriculated at the University of Leningrad (as St. Petersburg had recently been re-christened). He graduated with the equivalent of a master’s degree in economics in 1925, a couple of months shy of his twentieth birthday.

Leontief got into trouble with the Soviet authorities for a number of reasons, notably, for his vocal support for the politically disgraced sociologist, Pitirim Sorokin. He was detained and questioned on several occasions by the Cheka, an early name for the Soviet secret police.

In the same year of his graduation from the University of Leningrad, 1925, Leontief was diagnosed with cancer and allowed to leave the USSR for medical treatment abroad (as well as, one imagines, to be rid of a troublemaker). Luckily for the young man and for the future of economics, the diagnosis proved to be erroneous.

Once ensconced in Germany, Leontief continued his higher education at the Friedrich Wilhelm University in Berlin, receiving his PhD in economics from that institution in 1928.

Leontief wrote his doctoral dissertation under the supervision of the economist and sociologist, Werner Sombart. Sombart was the leader of the so-called “Youngest Historical School” of German social scientists and one of the most distinguished intellectual figures of his time.

Between 1927, the last year of his graduate studies, until 1930, Leontief worked as a researcher with Kiel University’s Institute for the World Economy, where he investigated the derivation of statistical demand and supply curves.

In 1929, Leontief traveled to China as an advisor to the Ministry of Railroads of the recently established Republic of China, headed by Generalissimo Chiang Kai-shek.

In 1931, Leontief emigrated from Germany to the US, where he found employment with the National Bureau of Economic Research (NBER).

In 1932, Leontief obtained an adjunct position with Harvard University’s Department of Economics.

During World War II, Leontief also worked as a consultant for US Office of Strategic Services.

After the war, in 1946, Leontief obtained a regular professorship at Harvard. In 1948, he set up the Harvard Economic Research Project, which he served as director until 1973.

In 1975, Leontief moved to New York University, where he founded the Institute for Economic Analysis, which he also served as director.

In 1973, Leontief was awarded the Nobel Memorial Prize in Economic Sciences.

Four of Leontief’s former doctoral students have also been awarded the Nobel prize:

Leontief is best known for his development of the method of multifactorial economic analysis known as the input-output (I-O) model.

An I-O model is a mathematical model that represents the causal dependencies among the various industrial sectors of a national economy, showing how the output from one sector becomes input for a different sector.

Mathematically, I-O models are special cases of linear programming, which finds the optimal solution for a multifactorial system given a set of requirements represented as linear relationships.

In the field of economics, linear programming is used to find such optima as maximum profits or lowest costs, but it has been applied to many other fields, as well, such as airline flight schedules.

Leontief’s first published worked on the I-O dates to the 1930s, but in 1949 he was able to take a giant leap forward when Harvard gave him access to a modern digital computer.

Taking data provided by the US Bureau of Labor Statistics, Leontief divided the US economy into 500 sectors, modeled each sector in accordance with the data by means of a linear equation, and used the computer to solve the resulting system.

Leontief’s successful computer-generated solutions to I-O models were among the first significant uses of computers for mathematical modeling in any discipline.

Professor Leontief is the sole and unchallenged creator of the input-output technique. This important innovation has given to economic sciences an empirically-useful method to highlight the general interdependence in the production system of a society. In particular, the method provides tools for a systematic analysis of the complicated interindustry transactions in an economy.

Beyond economics, Leontief’s work had a major impact on the development of pure mathematics, especially through its influence on George Dantzig, the father of the “simplex algorithm” method for finding general solutions to problems in linear programming.

The Structure of American Economy, 1919–1929: An Empirical Application of Equilibrium Analysis (1941).

Studies in the Structure of the American Economy: Theoretical and Empirical Explorations in Input-Output Analysis (1953).

The Economic System in an Age of Discontinuity: Long-Range Planning or Market Reliance?, with Herbert Stein (1976).

The Future of the World Economy: A Study on the Impact of Prospective Economic Issues and Policies on the International Development Strategy (1977).

The Future of Nonfuel Minerals in the United States and World Economy: Input-Output Projections, 1980–2030 (1983).

The Soviet Economy within a Global Framework: Input-Output Projections to the Year 2000, with Jorge Mariscal and Ira Sohn (1983).

The Future Impact of Automation on Workers, with Faye Duchin (1986).