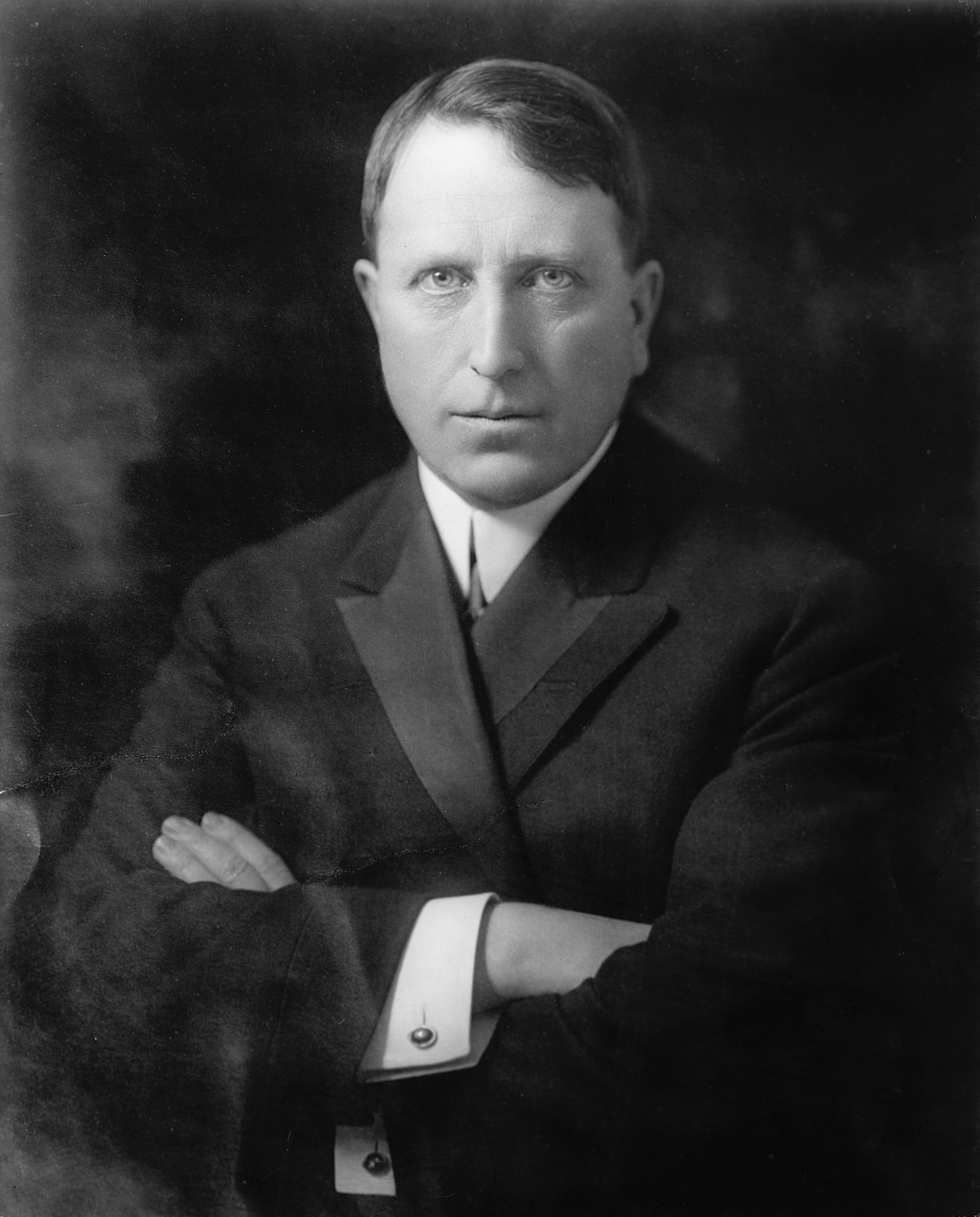 Hearst’s father, George Hearst, was an engineer and mine owner, who became a millionaire. The Hearst family, who were Protestant, had immigrated to South Carolina from County Monaghan in Ireland in 1766.

Hearst’s mother, who was much younger than her husband, was from a small town in Missouri. Her forebears, too, were originally “Scotch-Irish” (from County Galway). Later in life, she became a major philanthropist, as well as the first woman to serve as a Regent of the University of California, Berkeley,

After accumulating his fortune, George Hearst decided to enter politics. He was first appointed a US Senator in 1886 to fill out the term of a seat that had fallen vacant. He was then elected to the Senate (D-California) in his own right, where he served until his death in 1891.

In 1885, Hearst entered Harvard College. At Harvard, he devoted his energies more to his social life—including membership in the Harvard Lampoon, the Hasty Puddingtheatrical club, and various drinking clubs—than to his studies.

Before long, Hearst was expelled by Harvard, some of whose faculty members were the butt of various pranks that Hearst and his friends had perpetrated.

In 1880, George Hearst acquired the family’s first newspaper, the San Francisco Daily Examiner, as payment of a gambling debt.

William Randolph took over the reins of the newspaper in 1887. He also founded the Hearst Corporation (now Hearst Communications, Inc.) that year.

The young Hearst poured money from the family fortune into his newspaper, hiring an outstanding stable of some of the foremost authors of the day, including Ambrose Bierce, Jack London, and Mark Twain, all of whom worked for the paper at one time or another.

Moreover, Hearst undertook a serious of investigative reports on the corruption then endemic to the state, exposing wrongdoing even in companies in which the Hearst family held a financial interest.

All of these policies made Hearst’s paper wildly popular. Within a few years, the Examiner dominated the San Francisco market.

The elder Hearst died in 1891. William Randolph, young as he was, already envisioned turning the Hearst Corporation into a company with a nationwide scope.

Hearst saw that to achieve this goal, he needed a flagship newspaper in the country’s premier market on East Coast—New York City. To this end, in 1895 he purchased the New York Morning Journal (later, the New York Journal-American), employing more prominent writers, like Stephen Crane.

Hearst spun off an evening edition of his east-coast paper, called the New York Evening Journal. At that point, he found himself in head-to-head competition with Joseph Pulitzer’s New York World.

Hearst plunged into this competition with enthusiasm, mounting a concerted effort to increase the Journal’s readership at the expense of the World’s through a panoply of innovations. Pulitzer returned Hearst’s attack blow-for-blow.

Both men poured resources into aggressive investigative journalism, played up dramatic crime and human-interest stories, made prominent use of bold headlines, illustrations, and political cartoons, and expressed editorial support for both domestic moral crusades and foreign military adventures.

This coordinated suite of practices soon came to be known as “yellow journalism” after a cartoon entitled “The Yellow Kid,” which appeared Pulitzer’s World.

In 1898, Hearst’s paper reached a circulation in excess of one million subscribers—and Hearst reached the pinnacle of his fame (some would say, infamy)—following the explosion and sinking of the American warship USS Maine in the harbor of Havana, Cuba, in February of that year. At that time Cuba was still a colony of Spain.

To this day, there is academic debated about the real cause of the explosion that sank the Maine. However, Hearst’s Journal did not pause to ask the reason, but simply jumped to the conclusion that it could only be the nefarious Spaniards.

Over the next few weeks, the Journal plunged into the project of whipping up public outrage to a pitch capable of overcoming the traditional American aversion to foreign wars.

Acting concert with future Vice-President and President, Theodore Roosevelt, Jr., who was then serving as Under-Secretary of the Navy under President William McKinley, Hearst played a significant role in the declaration of war against Spain in August.

Hearst poured a great deal of money into covering the Spanish-American War over the following months. He traveled personally to the war zone in Cuba, along with a small army of reporters and even a printing press in tow, to be able to scoop his competitors.

In the end, however—in an event of what some might consider poetic, if not cosmic, justice—Hearst lost a great deal of money on his very expensive coverage of the war.

After the war, Hearst concentrated his efforts on expanding his newspaper empire. By the mid-1920s, he owned nearly 30 newspapers nationwide, including the Atlanta Georgian, the Boston American, the Chicago Examiner, the Detroit Times, the Los Angeles Examiner, the New York Daily Mirror, the Seattle Post-Intelligencer, the Washington Herald, and the Washington Times, in addition to his flagship papers, New York Journal and San Francisco Examiner.

During these years, Hearst also branched out into book and magazine publishing. Several of the magazines he founded are still publishing today, including Cosmopolitan, Good Housekeeping, Town and Country, and Harper’s Bazaar.

When the Stock Market Crash of 1929 arrived, Hearst found himself in a financially overextended position. He struggled through the reduced revenues of the Great Depression, but eventually had to go through what was essentially a bankruptcy process in 1938.

In 1904, Hearst mounted a serious campaign for the Democratic nomination for the presidency of the US, but once again he failed in his aim.

Through his newspapers’ op-ed pages, Hearst unsuccessfully opposed the US’s entry into the First World War. A few years, he successfully opposed Senate ratification of American membership in the League of Nations, a project dear to Democrat President Woodrow Wilson’s heart.

Part of Hearst’s colorful public image stemmed from his personal life, notably, his liaison with the film actress Marion Davies—who later wrote a book about their affair (see below)—and the palatial mansion styled the “Hearst Castle” he built in San Simeon, California, on the Pacific Coast about halfway between San Francisco and Los Angeles.

In 1941, filmmaker Orson Welles’s expressionistic reimagining of Hearst’s career, Citizen Kane, took place against the backdrop of a Hearst Castle–like set. In the movie, this majestic simulacrum, built by the Hearst stand-in, Charles Foster Kane, is called “Xanadu.”

In a fitting touch—whose irony Hearst might perhaps have appreciated—not only is Hearst Castle immortalized in Citizen Kane as “Xanadu,” today the real-life building itself may be visited on public tours.

Undoubtedly, Hearst’s greatest historical importance lay in the innovations he made to journalistic practice, which made newspapers far more popular than ever before. It is probably not too much to say that he invented the conception of journalism we hold to this day.

While many contemporary observers denounced yellow journalism as cheap sensationalism, some modern scholars have defended Hearst’s and Pulitzer’s practices as a salutary break with earlier stuffy, elitist journalism.

For example, Kenneth Whyte (see “Selected Books About Hearst” below) has written:

All good yellow journalists … sought the human in every story and edited without fear of emotion or drama. They wore their feelings on their pages, believing it was an honest and wholesome way to communicate with readers … This appeal to feelings is not an end in itself… [they believed] our emotions tend to ignite our intellects: a story catering to a reader’s feelings is more likely than a dry treatise to stimulate thought.

Another innovation Hearst introduced with the New York Journal was printing multiple points of view on his paper’s op-ed page. Before him, newspapers were monolithically aligned with particular political viewpoints.

In this respect, it seems we are now entering a post-Hearst age.

Selections from the Writings and Speeches of William Randolph Hearst, edited by E.F. Tompkins (1948).

William Randolph Hearst: A Portrait in His Own Words, edited by Edmond D. Coblentz (1952).

Davies, Marion, The Times We Had: Life with William Randolph Hearst (1975).

Nasaw, David, The Chief: The Life of William Randolph Hearst—The Rise and Fall of the Real Citizen Kane (2000).

Pizzitola, Louis, Hearst Over Hollywood: Power, Passion, and Propaganda in the Movies (2002).